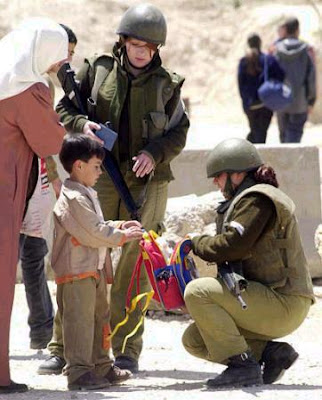 Before I entered the army I used to always throw around something I had heard from Israeli advocates. They like to say that Israel is one of the most humane armies in the world, despite what anti-Israel crowds may say. That crowd says that we kill innocents, that we beat the Palestinians, that we do everything possible to demean the humans living in Gaza, the West Bank, and within the borders of the State. I knew it wasn't true, so I followed the pro-Israel declaration of humanity.

However, I didn't really know what it meant for the IDF to be "humane." I knew that Israel gives free medical care to Palestinians with serious problems, including allowing women in to give birth in Israeli hospitals. I knew that we take religious Muslim laws seriously at checkpoints, especially in terms of male soldiers not touching female Muslims. I knew that we take the utmost care to protect the dignity of the Palestinians. I guess I didn't know how we got to that point, to the point of knowing how to be humane, what being humane meant.

I finally figured it out when we were taken into an auditorium on base recently to receive a lecture about "The Spirit of The IDF," or Ruach Tzahal in Hebrew. This was actually the second time that I was formally taught the ethical code of the IDF, the first being in Michve Alon. We took our seats in the large auditorium, and at the podium stood the Company Commander, the commander in charge of all the new recruits in my battalion. After we got situated he started.

We spent well over an hour going through all the points of Ruach Tzahal, from the principle of Comradeship to "Purity of Arms." We looked at pictures taken of Israeli soldiers who upheld the principles, and we also looked at a couple pictures of soldiers that failed this all important code. I can't even begin to tell you how serious this lecture was.

In the three Israeli military bases I've been on I've seen the Spirit of the IDF posted everywhere. In the dining hall there is the guidelines. In the armory. In the classrooms and by the shooting range. We are Jews, after all, a religion and ethnicity of humanitarians. Who wrote the book on the Golden Rule, doing unto others as you wish them to do unto you? I challenge anyone to say that the Israeli army doesn't know how to teach its soldiers what it means to be the most humane army in the world.

After the lecture they gave us pocket sized copies of Ruach Tzahal to keep in our military ID case, something we have to have with us at all times. Every time I see a commander open his I see a copy of Ruach Tzahal. It's just that kind of army. We are obsessed with our ethical code. I am obsessed with our ethical code, and I read it constantly, endeavoring to know each word.

Here are some finer points that might drive all this home:

Human Life - The IDF serviceman will, above all, preserve human life, in the recognition of its supreme value and will place himself or others at risk solely to the extent required to carry out his mission. The sanctity of life in the eyes of the IDF servicemen will find expression in all of their actions, in deliberate and meticulous planning, in safe and intelligent training and in proper execution of their mission. In evaluating the risk to self and others, they will use the appropriate standards and will exercise constant care to limit injury to life to the extent required to accomplish the mission.

Purity of Arms - The IDF serviceman will use force of arms only for the purpose of subduing the enemy to the necessary extent and will limit his use of force so as to prevent unnecessary harm to human life and limb, dignity and property. The IDF servicemen's purity of arms is their self-control in use of armed force. They will use their arms only for the purpose of achieving their mission, without inflicting unnecessary injury to human life or limb; dignity or property, of both soldiers and civilians, with special consideration for the defenseless, whether in wartime, or during routine security operations, or in the absence of combat, or times of peace.

C. When Confronting The Enemy. 23) The IDF serviceman will act fairly with self-control, reasonably, and professionally, in carrying out the responsibilities of his position, in all his contacts with civilians in areas controlled by the IDF, whether in the course of battle or afterward. He will show respect towards the beliefs, values, sacred and historical sites of all civilians and military personnel as they deem proper and to the extent possible, in keeping with the values and basic principles of the IDF and in accordance with military needs and the given circumstances.

And the list goes on, but I won't beat a dead horse. I am so encouraged by the overwhelming importance this army has placed in our unique code of conduct. I sat in the lecture led by the top of the commanders, something that doesn't happen too often, and I realized what it meant for the Israeli Defense Force to be the most humane army in the world: Our ethical code isn't just something written on a sheet of paper. Its words are holy to the Israeli soldier.

Here's a link to a translation of the Spirit of IDF.

Here's a link from the JCPA about the code and related issues.
at 1:28 PM

did you take the picture?

I did not take the picture. Found it on the internet. To be honest, I spent about 45 minutes looking for a picture I know of an israeli combat soldier crouched down with his hand behind him, other hand holding his gun, and behind him is a small palestinian child. There was some clash of some sort in the West Bank, I believe, and he was protecting the child from Palestinians trying to hurt the soldier even though the boy was with him. I just wanted to show how Israelis soldiers operate - to protect the innocent, even Palestinians, at the risk of life and limb.
Couldnt find it though.

I just read your post, after I posted mine on operation Oferet Yetzukah; I am going to edit my post and link yours in mine (check it out), because I mention just this subject: the humanity of the IDF!
Thank you for writing about this, and again I wish you hatzlachah and bitachon.

Qualicum Canadian Guy;
I have been seeing so much on our news about the Israeli response to the rockets and mortars from Gaza, "disporportanate response" seems to figure in a lot of the articles. I don't know what for the life of me the Left leaning types writing these articles think would be "proper" I read that some 5500 of these missles have rained down on your country over the lasty 2 years, they are random and target the citzens of your country, some of the people that are "demonstrating" outside your Israeli embassy in Ottawa self identify as Palestenan-Canadians I suppose it would not be very smart to go back to Gaza and demonstrate outside Hamas's headquarters for constantly attacking their neighbors, I applaud your IDF efforts, War is bad but not defending your people is much worse, our P M has said we will stand by you, I think that is the right thing to do, god bless all your soldiers, and your leaders, shalom