I Must Be Moving On

When I moved to Israel in September of 2007, even after having spent about a year here during college, I couldn't help but feel a certain amount of anxiety. Uprooting your life and leaving everything you've known behind isn't easy, especially for a sentimentalist like me. My medicine against this churning in my heart was writing, and Israeli by Day, American by Night was administered in heavy dosage from Day One.
This blog was the backstop for my life. Everything I went through, all the crazy stuff I saw, was painted in my mind on a canvas of how it would appear encapsulated in a post. My perspective was constantly refracted through the lens of my sole creative endeavor. Not one day passed that I didn't pray for the material to create that one blog that would send me into Internet kingship, the master of Web 2.0. Honestly, this blog was my saving grace. If I didn't have the warm embrace of the orange "Publish Post" button, that feeling of satisfaction, completion, and purity, I might have never accomplished half of what I have.
Two and a half years after its inception, with two hundred and seventy blog posts published, multiple interviews, army spokesman offers, dozens of links from other sites, countless emails, hundreds of article comments, and random Facebook friends I've never met, I feel like I can finally say that I really created something meaningful in my life. I have something that I can, essentially, hold in my hands and say proudly, "I made this!!!" The constant responsibility of creating those posts, trying to make each more interesting than the last, has really paid off. I wouldn't trade my experience for any other, no matter what. Even if the books I want to write never materialize, which are already written in my head anyway, I can confidently look to this collection and feel a modicum of self-regard, pride, and achievement. This blog is my most cherished possession.
"Writing, I think, is not apart from living. Writing is a kind of double living. The writer experiences everything twice. Once in reality, and once in that mirror which waits always before or behind." Catherine Drinker Bowen
But all that responsibility, all that continual striving for yet another post, yet another batch of positive feedback, which of course is a writer's goal (who isn't looking for praise?), ends up taking its toll. I suppose that I've written a few hundred pages already, a book. The strain and pressures add up. And I'm tired. I have slowly been moving on, naturally, which doesn't make me sad in the least. Yes, my heart is tender over the matter, I'll admit, but I'm happy to write "The End" and package it all up. Time for the next adventure.
The truth is, I was supposed to finish my army service this very month of April, 2010. For many reasons, none of which I want to go into for the hundredth time, I signed up for another six months. In the grand scheme of things, it's really not a big deal. By the end of my service, which will be two years in total (nothing in terms of army services), I hope to feel the same closure on this period of my life as I feel now writing this final blog post. That's been my goal all along: To have a pretty little package of life experiences with four corners and a roof. Something with all the loose ends tied up.
Regrettably, nothing is ever that perfect. This blog, and my army experience, are no different. There are many loose ends. Would you believe me if I told you that I never even wrote about the most harrowing, exciting, and intense times of the army? I never did get around to writing that West Bank arrest operations post. How about having my own personal IED discovered before I was discovered all across the road? Ridiculous patrols with your finger on the trigger, or even the most hilarious adventures at 3:00am deep in the casbah. And Gaza... forget about it. All that stuff was the real army. I wrote the pretty stuff. The real, gross, disgusting, 'I don't want to see this' kind of stuff has conveniently been omitted. I suppose I intend all that for a different audience, or at least in a different medium. This open blog is just not the place.
Despite feeling that there were posts that slipped by, great ones even, I am still comfortable saying adios. I'd like to thank all my fans, the most dedicated and loyal readers whose names always appeared in the comments section. I waited on edge for your feedback. And I'd like to thank all the haters who always made their way to the blog. I knew which posts were my best by how viciously I was attacked.
So how do you do it? What's the very last thing you can say? A meaningful quote? A pompous, prophetic reflection? Something vague and post-moderny? No, no... for the Israeli soldier, there's really only one way to say goodbye, only two words - but two words that say it all.
UNTIL WHEN??!!
!!???? עד מתי 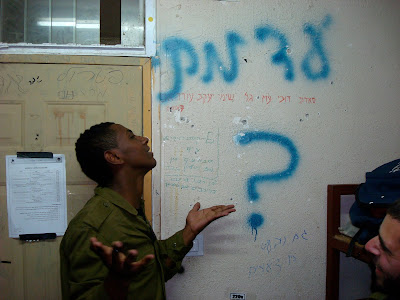