All In The Heart, Not The Head

We had a masa a while back that absolutely killed me. For those that don't know, masa means journey in Hebrew. For combat soldiers in the Israeli Army you have to do a masa for everything on your uniform, for everything you earn. For example, to get the strap for our gun we had a masa. For the pin on our beret saying we are a foot soldier we had a masa. The final masa for the brigade beret (masa kumta) is a 70 kilometer feat of endurance that I am already dreading even though it's a solid 6.5 months away.

The word masa is actually a little bit misleading. I'd say instead of calling it a "journey," it should be called a jog/run/sprint. You have full combat gear on - vest, 7 magazines, 2 canteens, camping gear if you're coming from the field - and here you are basically running half the trip. The gear probably weighs an extra 30 pounds, maybe more, and the pace is nearly unbearable. People that are able to participate in the crawling and running and heavy lifting throughout the week often still sit out from the masaot. It's just that tough.

The masa that killed me was only a 4 kilometer run, but I was carrying the worst of the extra gear - the water bottle pack. This pack is a backpack with some ridiculous number of one liter water bottles strapped in, all of which are tarred on the outside, so the lids don't close properly. Whoever wears the pack ends the masa drenched from the lower back to the shoes. When the commander told me to grab the pack my strength withered and I knew hell was about to begin.

We began the hike well into the night, and the whipping winds stung against my already damp legs. I wasn't yet warmed up, I was cold and wet, and we don't stretch before the masa, so I couldn't quite find the spirit to be a team leader. I was just kind of there. My head wasn't in the right place. I was only there to finish, not to help others. Needless to say, when we began the hike with a charge up a long hill I knew it wasn't going to be pretty.

The problem with being selected to carry extra gear (water packs, stretcher, radio) is that you have to be in the front, right behind the commander. You have the heaviest weight on your back, but you have to be in the very front where the running is obviously the fastest! There is no "I'll just take my time in the back" option. No sir.

Unfortunately, you're not going to read a "and then I found my resolve" ending to this story. I had a bad mentality from start to finish. I felt outmatched because of the water pack. I felt incapable of continuing. I felt finished the entire time. I never found the guts to yell and soldier on like a true Golanchik.

But nonetheless I stayed up front for all but about 2 minutes when we took a hill near the end of the first half. After that extremely short stint falling behind, I leaned on my unencumbered brothers up front and pulled it together. I put one foot in front of the other and ran with the commander, leading the group ahead. We stayed together as one tight block all the way until the final 500 meters or so when the commander, a small Ethiopian guy that can run like the wind for hours, took my hand and sprinted with me to the finish line. I was dying dying dying during the sprint, and once I tried to pull my arm away as if to say "I can't sprint anymore!," but he wasn't having any of that. He grabbed me even stronger and charged ahead even faster. I said nothing and dug deep, eyeing the finish line as if to will it closer. 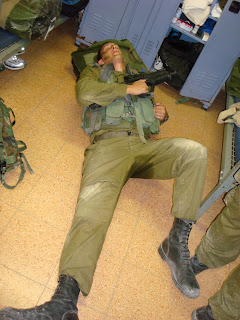 A picture someone snapped of me afterward. Note the wet pants.
That's the waterpack. Absolute exhaustion.

At the end I nearly fell down, but I caught myself and put my hands on my knees, doubling over in relief and exhaustion. I looked back to see the group a good 100 meters behind me. Despite the water pack and the lack of nerve, I persevered through my mind's unwillingness and pulled strength from my heart's dedication to never give up. One guy in the group got yelled at viciously by the commander because he actually said "I can't." He had no extra gear on, either. He needs to develop the heart of a warrior.

All the hardest physical tests in the world mean nothing to a heart that refuses to fail. My head said NO!, but my heart couldn't bear that weakness. I'm not saying I'm some great athlete who can do anything, I'm not, but I know what it means to go past my limit. I'm absolutely loving these times in the army, at least afterwards. Beforehand I dread the masaot more than anything else. That and Krav Maga, I guess.

One final word on perseverance. We did another masa this past week, a longer one as each successive one is, and I had no extra gear. I absolutely murdered it. I wasn't even tired, despite running and pushing the guy in front of me for nearly half the journey. Even though I felt great on this hike, I still had to persevere unfavorable conditions. During the previous week we did the obstacle course, and while climbing the rope I got a really bad rope burn. That was being rubbed and bloodied throughout the entire hike. 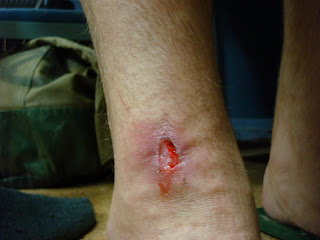 Secondly, my sock was way down inside one shoe, making each step uneven and uncomfortable. 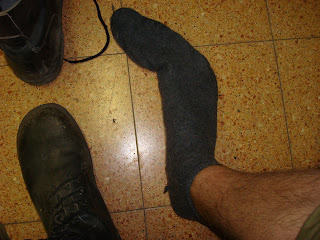 Furthermore, in my other shoe the two pads I use were crunched together, making that totally awkward. My toes were stepping onto the wooden interior sole instead of padding. It sucked. I just pushed it out of mind, however, and continued without a word. The thought or inclination to step out of line and take off my shoes and fix the insides didn't even cross my mind. I didn't let it get to me, no matter how terrible it all felt.

One of the reasons Israel won in 1967 and in 1973 is because its soldiers were well-hydrated. Israel budgeted 1 L/hr for its' troops while Egyptian soldiers were granted 1L /day. So don't knock the water pack too hard.

Good luck with the masa'ot

Amen Brother. We love you

Danny, We're so proud of your attitude of perserverence and leadership mentality.You have been like this since you were a little boy. But, please, take care of yourself. Coincidentally, Dad ordered special shoe inserts for you(hope you receive them when we mail them). We love you so much. Mom and Dad
PS: Stay safe.

Danny I'm going to get that lazy son of mine on the pizza .Hope we can get some to you.Be safe. Lairds Mom

Just started reading your blog (got it from Nameless)- phenomenal work.
Kol HaKavod- and I hope you and all the rest of the soldiers remain safe!

You are an awesome writer! When you have enough time, you owe it to the world to write a book about life as an American in the Israeli army. (You can just use your blog posts...)
Regards from Queens, NY
Rachel Wizenfeld

Thanks for the compliments! Always very appreciated, trust me.

The IDF at one time practiced "water disipline" until too many soldiers died of dehydration.