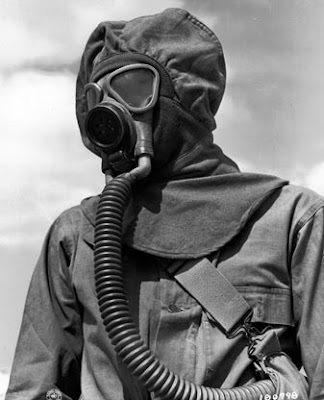 A couple weeks ago we did our training on unconventional warfare. We learned all about biological, chemical, and nuclear weapons, and what to do in the case of an attack. We learned about what to do in all the alert levels, and how to prepare for these situations. Finally, we were trained in all gear - gas masks and biochem suits. After we had reviewed and discussed all of the material, we took a test to qualify. Even though it was pretty technical Hebrew, I did alright.

The next morning we went for a masa, literally a journey, which is a fully geared up hike. It's kind of a big deal that I'll discuss later, the general idea of why you do those hikes and what they mean. Anyway, we finished the hike and then went to breakfast. Because of the strenuous morning we all had big meals. We doubled up on the eggs, I took a huge bowl of corn flakes, and instead of my usual one I had a second cup of lavanah, a heavy sour cream-esque cheese that people eat on bread, with vegetables, with anything really, or even alone. It's the only food that we've actually been forced to eat.

After our big meal we went back to the barracks, hoping that they'd go easy on us. It was the end of two straight weeks on base, and we had just done very well on our first masa. Didn't we deserve an easy rest of the morning? Instead, the commanders told us to grab our gas masks and meet out front in 30 seconds. I still had no idea. To be honest, I thought we were going home early. Thursday afternoon back to home. I had my reasons.

Then we lined up and headed, with our guns mind you, towards the direction of the logistics facility. Ah, I though, maybe we're going to put our guns inside there since we can't take them home yet! "Now I'm pretty sure we're going home early," I thought. Wrong. As we turned a corner I saw the tent. I realized I was very much not going home yet.

Around the tent our commanders told us to test out our masks, make sure everything was still working on them. So we put them on and tightened the straps, breathing through the filters. I looked around and saw about 100 guys straight out of some bad science fiction movie. How strange it seemed to be surrounded by those alien faces, big black rubber with bubble bug eyes and a protruding round mouth.

The SAMAL, a jerk of a commander, took us four at a time to prepare for the tent. My turn eventually came, and the first thing we did was drop to the ground and crawl across rocks. Then we jumped up and sprinted over to a pile of dirt and back. By this time, considering the physical exertion of the morning, I was beat. But not yet was I finished. Another commander I had never seen before came out of nowhere and started yelling at us, so we dropped down and did an undetermined amount of pushups. I think we probably did about 40 or 50. At about 20 I thought I was going to die because breathing through the gas mask is labored, and I was already out of breath. I was sucking in air through a straw, all while doing pushups with a sealed mask on my face.

Finally he yelled at us to go into the tent. I ducked down beneath the brown tarp and entered the haze inside. My commander was there in a full biochem suit, gas mask on face, but he was taking the mask off one of the other guys that entered before me. I stood there with my mask on, breathing deeply but feeling none of the gas. The mask really does work, which amazed me. I didn't know if I was supposed to take my mask off yet, especially since there were less commanders than the soldiers, and they were talking to the soldiers individually. I pulled my mask partially off, a fraction of a second, and I got a burning sensation instantly on my face. Just as instantly I pushed the mask back on, figuring I'd wait for them to come talk to me.

I watched for a few seconds as the soldier my commander was talking to struggled to keep his head up, obviously pained from the gas in the tent. Before I knew it, however, my commander came over to me and literally ripped my mask off my head without loosening any of the straps. My eyes-- my eyes! I felt like a million little pins were stabbed into every millimeter of my eyeballs, a burning sensation like acid dropped on the skin. My throat tightened against the toxin, and I choked out answers to the commander's questions.

"Do you have a girlfriend?!"

I spun on my feet, gas mask in hand, and ducked below the tarp towards the light filtering in through the fog. As I left a girl shouted at me not to touch my face, and then a commander shouted to wave my arms like a bird. I followed the above directions, jogging around to get fresh air into my lungs, all the while spitting and coughing imaginary poison deep within. There's really nothing you can do but let a few minutes pass before you feel ok.

It was pretty awesome. It really wasn't that bad, though. See the below video to see some girly U.S. military guys overreacting.

I thought you were going to say you forgot to take the lid off the filter inhaler like some people do. My sister did that in the Gulf 2 month after we got to this country. So a few months later when I got to the army I was already experienced with gas masks. But going into the tent and feeling the chemicals is shocking. You shouldn't touch any part of your body and especially not your eyes and you also shouldn't wash your face with water. Just run through the wind.

Wow, I can't believe I'm saying this, but I'm jealous! I want the military experience!

wow - crazy stuff! At least after the toilets at ulpan etzion you were well prepared! :)

Great post. I take issue with the 'girly' comment, though: having gone through the 'gas chamber' during US Army Basic Training and at my unit I can tell you that the amount of gas used during Basic Training is much higher than what is used for US Regular Army units. You may have, in fact, been exposed to much lower levels of gas than those 'girly US military guys' who you think are overreacting.

I was kidding about the girly comment, but if you're a feminist I understand. That's ok, my mom is a feminist.

I don't know how much gas the American soldiers take in. What they do in the IDF is they put a 5 foot tall tank of gas, put it in a tent, and open the valve. I mean, it's pretty thick gas.

and we had plenty of people overreact and some throw up, so again, my blog is not a Wall Street Journal article. I like to throw in a little dry humor here and there.