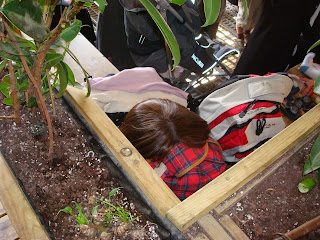 Orthodox Jewish women, according to Jewish law, are supposed to cover their hair. This law is followed in varying degrees across Judaism, with the obvious non-acceptance, to the most stringent interpretation. I had a discussion with an engaged friend today about what his future bride will do, and so I remembered a picture I took a month ago or so.

I was on a little trip with some friends to an archaelogical site here in Jerusalem, an area which happened to be packed with many ultra orthodox (charedim). We purchased our ticket at the crowded counter, me trying not to bump into of the married women - touching is a no-no - and then moved to the rental lockers to store cell phones and the like.

I looked down at the flower-box lined bench next to me and saw a weird sight. A sheitel, a European wig, was poking out from the bags laying on the wooden planks. Was a woman buried underneath the backpacks? Were her legs chopped off? Was she taking a nap in the most awkward position ever? I couldn't figure it out...

Then I realized that it was just the wig. I was thrown off guard, considering these women NEVER remove their wig, and certainly not in public. End of story. Just wanted to start the post-Yom Kippur season, the end of the super seriousness of the High Holy Days in Judaism, off on the right foot. Setting the tone for the new year, you know?
at 1:31 AM

I assume it was someones chag wig that had fallen out of a bag.