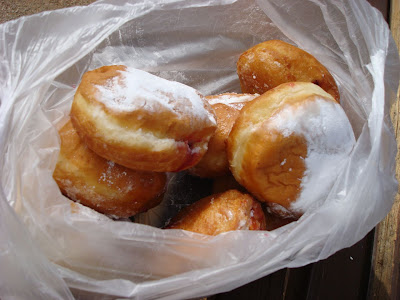 Let me tell you a few things about myself. For one, I hate carrying things in my pockets. I don't like my pants being weighed down by keys, a wallet, a cellphone, an iPod, etc. Meat often makes me feel nauseous. The spice saffron vividly tastes like soap to me. It's terrible. And finally, germane to this post, when I'm stressed out I don't overeat, overexercise, or run away from the problem. Rather, I get the most insatiable urge to buy things.

I am not a shopaholic, but if I'm nervous and having butterflies in my stomach, I can't get all the fancy gadgets and cool outdoors gear out of my head. Today I almost bought a preposterously overpriced cellphone. I was saved only by the fact that the cell provider wasn't satisfied with having direct access to my bank account - they wanted a credit card. Similarly, I was foaming at the mouth recently over the Nike+ SportBand.

So, as I was walking up the street next to the Mechane Yehuda Shuk (market), a teenage boy pushed by me with a delicious jelly-filled doughnut in his face hole. He was inhaling the powdered sugar covered delicacy. Here's how it went down:

"How many jelly-filled doughnuts can I get for 20 shekels?," I asked the shopkeeper.

I walked down the hill towards Jerusalem's biggest park, sat down on a bench next to the Supreme Court, looked out over the sprawling red roofs of the Nachalot neighborhood and the frolicking kids at Sacher Park, pulled a doughnut from the plastic bag that had begun to dig into my fingers from the weight, took one bite... and then I kind of woke up.

I came out of my daze. I thought, "Oh, that's tasty, but why do I have so many?" I finished the midday snack, licked my fingers, and then tried to figure out what the hell I was going to do with seven more jelly-filled doughnuts.

I have six more jelly-filled doughnuts left in my refrigerator. As I said, I don't really overeat when I'm stressed out. I bought the doughnuts not because I wanted to eat them, but rather because I wanted the positive association of making a new, stupid purchase. I wanted to distract myself from the churning anxiety in my chest. I wanted to forget my worries for just long enough to stuff my face.

Unfortunately, I didn't quite have the appetite. I'm just ready to get the show on the road, and there's no cellphone or doughnut that is going to mitigate that.
at 6:42 PM