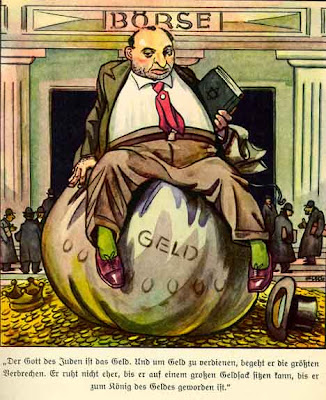 Through all these recent financial crises, despite the turmoil and fear and panic, I've been so proud of the advancement of our society and blame mechanisms. I am a student of historical anti-semitism, and I find myself fascinated at the blatant lies perpetrated against the Jewish people in times of despair. Germany blamed the condition of their state on the Jews, eventually leading to the idea that the elimination of the sickly nation would cure Germany of its ills and give them the purity of nation and state to achieve their aspirations.

Germany is by no means the only example in history when Jews were the scapegoat for financial crisis. It almost goes without saying that when there is a dramatic misfortune in a country, the Jews will be blamed. So, when this whole morgtage crisis and bank failures started, I was ready to see if anti-semitic remarks would creep into the discourse. Just last Friday night I commented to somebody that I was happily surprised to have not really come across much blaming of the Jews in this matter!

The Jerusalem Post has an article, however, that notes an Anti-Defemation League report on an uptick in anonymous anti-semitic comments on mainstream web sites. For example:

"Jews are greedy, rotten slimeballs," wrote one surfer on a Yahoo Finance group.

"It's difficult, if not impossible, for one honest investor to neutralize the efforts of thousands of Jewish swindlers."

There is a YouTube video called "The Court Jewsters" currently up that quite clearly blames the Jews for the financial meltdown. In case you don't want to watch the video, and I did think it was pretty boring, here's a couple thoughts (it's included at the bottom of this post). One, the intro scene essentially says "Jews are communists, and we must take our nation back." That's classic Aryan xenophobia - let's take our nation back.

Secondly, the description of the video discusses the historical Jewish moneylender. The medieval Jewish moneylender was believed to take flesh in return for debts. Pogroms were carried out against entire Jewish populations because of rumors that a moneylender stole a Christian baby to settle a loan. Riots were fomented as a leader rallied the masses against the Jewish moneylender who, according to popular thought, strangled the economy with debt in order to take over the world.

It's just classic anti-semitism. This is Nazi stuff. This is pre-Israel anti-semitism. If you do a search for anything Israel-related on YouTube, and it's been like this for years now, you'll see scores of really scary comments. For example, on a plain old facts about Israel video, you have this comment:

withoutmercyuk (36 minutes ago)
You do know that Rothschild was given guardianship of 'Israel' in 1917. He stole Britain from the British and USA from the Americans. He owns the bank of England, the Federal Reserve and is guardian of the treasury of the vatican. He is not a man of God.

And finally, the star of the ball is an image from "The Court Jewsters" blaming Jews for the financial crisis. A burning American dollar bill has written on it, "In Zionist Bankers We Trusted." The best part of that image is that there is a mass of humble, heavily coated regular folk in the foreground. I wonder what they're trying to imply... 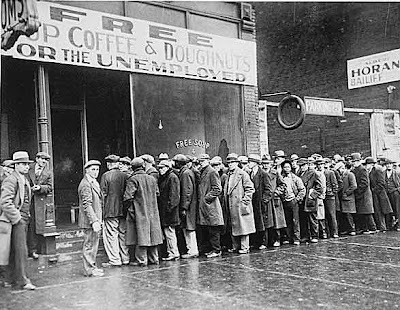 That's right, Jews caused the Great Depression, and we're already responsible for the state of the world's financial markets today. And to think that I was so proud of our advanced civilization! As Abraham Foxman said, the director of the ADL, "The age-old canards about Jews and money are always just beneath the surface."

Now, why doesn't YouTube take this video down as fast as Yahoo took down the remarks on their Finance site? And why doesn't YouTube try to employ a censoring mechanism to keep people from writing the most disgusting, literally pro-Nazi genocidal remarks against Israel and Jews worldwide? Honestly, check out most any comment section on an Israel-related video on YouTube!

This is mad.
We were just discussin over YomTov the potential of Jewish blame. I told the Rabbi he's a paranoid Jew for feeling pressured. Apparently, he wasn't too far off...

Like you said, nazi stuff. I wonder how these suckers can be so stupid? It's so lame, it's obviously bullshit. But I wouldn't mind it much, just a bunch of stupid cowards.

The thing that bothers me, Rafael, is that those same stupid cowards are the perfect targets for the same types of leaders we've seen throughout history - those that foment hate/revolts for power. It takes one good speaker and fomenter to renew the age-old threats to the Jewish people.

Oh I remember now how it started--a Norwegian gentleman at the table shared with us that in Sweden, recently, a (well known) talk show host was discussin the financial market and when asked what he thought could be done to save it, he responded "Let the religious Jews control the market for a few months and that is the only way it can be saved."

(I take responsibility for errors in details o'er here. But the main point is there)

I see your point, and I agree. But I like to think somethings have changed, I see stronger institutions, like Israel, and this make a lot of difference. But sure, nothings granted, there are threats.

Rafael - I hear you. Sarah Palin said the other night that she won't let Israel experience another Holocaust. I laughed at that! Why? Because Israel is strong, we are strong, and WE will never again let that happen.

We don't need to rely on others for our protection anymore. So, what I wanted to say is that the same old stereotypes and racism exist, but now we have the efficacy to combat it.

Er with G-d's help, that is. Israel has some pretty dumb moves on her record.

Ye I hope but..why not another Entebbe? What's happenin to us?

Sabra - I'm not sure if this is what you're saying by bringing up Entebbe, but if it is...

You can't compare something like the hostages in Entebbe to the hostages from our recent war (Shalit, Regev, Goldwasser). In Entebbe we had a very precise location to strike. We knew the architectural layout of the building. The surrounding area wasn't necessarily so impossible to penetrate. A place like Gaza... you can't make a surgical strike and extraction on miles of land!

They are just different. Now, if there is another incident like Entebbe, where, say, 30 Israelis are being held in the Algerian airport... I think we'd have a similar mission. Entebbe was unusually successful, but we can do something fairly comparable again.

I know the Israeli military is off course in your worldview, but the military still deserves its positive reputation.

It's frustrating to me--knowing that they CAN (protect, defend, fight, ambush, defeat, allow us to live in our own land) and seeing that they are NOT (enough).
Now now I know the army cannot be put to blame for the goverments sucky decisions..and that's why I still honor, admire, love and respect the IDF..but it's still frustrating.

Re Entebbe--ye I know gettin back the current MIAs is a whole different ballgame. It's just that seeing you list all our wars reminded me of 76 and whatta a victorious moment that was..and how we so badly need more of that kinda action.

It's like we put so much faith in Israel but why are we waiting till the chips are COMPLETELY down?? Why not act now? Guard your borders.

Ugh, this makes me sick. I just can't figure out if these bigots actually believe what they're spewing or if they just look at it as another excuse to rant.

Being on the outside of the Jewish community I will try to lend some insight. I know that it can often be difficult to see what is happening when you are in the middle of the storm.

I myself come from a group that has been pushed from land to land and can say that I have some concern and empathy for the Jewish community.

THERE ARE MANY GREAT JEWISH PEOPLE! In fact, it is my belief that the level of intelligence within the jewish community far exceeds that of any other social or cultural group. This, by its very nature lends itself to jealousy by all other groups. Very much like a superhero, people flock to those who are helping them every day in a great many ways; however, when things take a turn for the worst, the superhero is often cast-out. Why? Because, their greatness was evidently used in a way to trick (or harm) rather than help. I mean if they are truly great then how could something bad have ever happend - right? But people, evern the most intelligent - MAKE MISTAKES that can cause big problem.

You see, like all stereotypes, there is always some truth that sticks. And with the Jewish people, there are some who are truely bad and cause this sterotype to perpetuate and become reality.

This brings us to a vicious cycle, where people in society cast out the jewish, and the jewish people in turn protect themselves by keeping the more common folk out of their circle of trust. This then trickles down because people (by nature) tend to congrate with others who are alike.

The fact of the matter is that this vicious cylce will never end without empathy for the common. The african-american groups will never trust the white-man because they know deep down that they are feared (stereotypically) for their stregnth and volatility. The same goes for the Jewish community, who are feared for the intelligence. The difference is that african-americans are rounded up daily and the jewish are round up collectively (whenever something bad happens).

I must ask everyone to LOOK deep inside for what is GOOD and extend it to those who are in pain. DO NOT THINK OF YOURSELVES BUT THINK OF OTHERS WHO NEED YOUR HELP. This is the only true way to get past our biggest weakness as a people - IGNORANCE. The true intention is in the eyes of those who extend kindness, to those in need.

Sadly enough, Youtube admin are very quick to remove ANTI-fascist posting while they dont care about antisemitic videos and comments..And then someone have balls talk about the 'freedom of speech'..The freedom of spech on YT is ONLY for hatemongers, but not for them who criticize those hatemongers