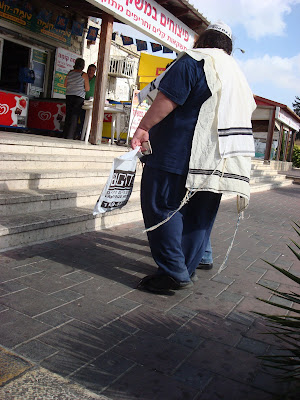 Jerusalem can be a tiny city at times. If you'll remember this story from March (and if you don't, you should read it), we get a lot of crazy people around this town. You've got the lady that walks up and down the street in a white robe with a gleaming silver scepter shouting she's the messiah. You've got the homeless man with cardboard signs standing on a soapbox downtown trying to start a new religion with Judas Iscariot as the messiah. You've got the burka cult modesty women who turned out to be child molesters. You've got the crazed Ethiopian I sat next to on the bus last week who was screaming about Arabs ruining the country, then he got yelled at by an Arab, and then so he started yelling about the Russians bleeding the country dry (I have video). Yeah, we've got it all and then some!

So back in March I was riding the bus, as the story I linked to above described in full, when a crazy woman and her "brother" boarded. She was a whirlwind of drug-induced dialogue and slap-stick comedy. The brother, however, just sat in the corner seat like a blob, a wide grin painted on his face. He had on multiple pairs of tzitzit (a Biblically commanded garment that orthodox Jews wear), which is way in excess of the required number: 1.

Just like that burka cult that went way in excess. Well, finally I got a picture of the guy the other day as he went and bought some vodka at the corner store next to my apartment. That picture right there would have gotten me hundreds, if not thousands of hits a few months ago. There is a popular blog that happened to acquire some pictures of a burka cult lady and her multiple tzitzit-wearing husband in a grocery store in Beit Shemesh - thousands of hits in one day. People love to see crazy people!

Damn. I'm always a few weeks behind... kinda like my paycheck from September that I still haven't received.
at 10:26 AM