All in all, I feel great. But man, it's one hell of a strange thing to say with total confidence that an adventure you are about to undertake is the most nerve racking, anxiety producing 'thing' you've ever done in your life. When else am I going to have the jitters that I have before I join an army? I mean, I'm not going to Baghdad, but the Israeli army is certainly nothing to sneeze at. Yes, if you were wondering, I am nervous about joining the pound-for-pound strongest army in the world. But, as I told a good friend a few days ago, it's time I walk the walk.

I remember taking a course in college called "Judaism in America." It was a great sociohistorical religion class that really forced me to examine my beliefs. Not necessarily my religious beliefs, but rather the way I viewed the role of religion and ethnic culture in life. As I voiced my somewhat hardline perspective on cultural and religious adherence, a friend and fellow classmate of mine turned around, looking particularly angry, particularly offended, literally shouted at me, "You're so hypocritical! You believe this and that is the 'only way,' but here you are, totally not following those beliefs!" She was a little more detailed and specific to what we were saying, so those weren't her verbatim words, but the message is there. She was saying, "Do you believe that as a concept or do you believe that as a way of life?"

Well, here I am now, fulfilling my belief that Jews should actively work for the protection of the State of Israel. I've talked the talk for, literally, years. It's time I walk the walk.

If you were interested, here is a prayer for the Israel Defense Forces (IDF) and soldiers in particular.

And just to leave this post on a very positive and extremely strange note, check out this image capture of the list of hits I got from Google searches the other day. Yes, someone actually searched for that on Google, and yes, my site comes up on the first page no matter if you spell "ostriches" correctly or not. What in the world... 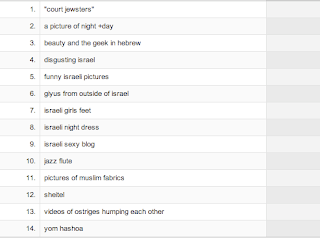 Since I'll be updating on random weekends, and since I hope to make this a pretty cool army blog, you should sign up to receive posts by email!  The signup box is on the right sidebar.
at 5:51 PM

I will confess, #3 was me, and I was happy with what I found!

Good luck in the army tomorrow and for the time you're in the IDF. I only did gadna for 6 days when I was 16 and decided it wasn't for me. BUT, I can totally understand the idea of believing it versus living it, because I often feel like a coward for being in the US.

Walking the walk in IDF combat boots is certainly the ultimate step commitment to Israel. As someone who came here, did the army and stayed forever thins gives my butterflies in my stomach just to read.
I hope you know about soldiers best friend – babywipes (you will find uncountable uses for them).

May Hashem watch over you and keep you safe.

Danny, hey it Lairds mom.Be safe and thanks for writing this blog.I used to be able to send pizzas to the Israeli army.I would be more than happy to send some to you if needed.

Thanks everyone. I appreciate the encouragement!

Mrs. Tuttle - I know from only a few days that the soldiers appreciate presents like pizza! I'm not sure where those programs are listed, though I have certainly seen tons of them on the news website jpost.com

My heart goes out to you. My two sons have completed their active duty (they made aliyah in 2003)and are now married, and eligible for reserve duty of course. My youngest daughter chose to be kravi and is in her second year in combat engineering; she signed up for 3 years.
Go forward, Danny, be positive and be strong.
אני מאחלת לך הצלחה וביטחון

Dear Danny,
I have recently flown from Australia to join the IDF as a lone soldier, and I too aspire to become Golani. I have found your blog to be awe inspiring and have gained much comfort, insight and confidence in your words as I count down the days till I start. I cannot express the gratitude I feel toward you as you share you experiences, as your writing has truly confirmed in my mind that I have made the right decision. I can only hope to possess the same inner strength as you. You have truly inspired me. Kindest Regards, Hayden.

Anonymous Australian - good luck on your service. Thanks for your message and the compliments. I personally don't think the blog was that great, but I do understand how important it has been to so many people - more than I could have expected. I just wish I had this blog to read before I went into the army. Be strong and always look forward. That's the best advice I ever received; always look forward.

bit of a typo, I'm somewhat tired after dealing with the Ministry of Interior today getting my A2 Visa haha

Well, my advice is still to ask for Golani as your number one choice, and guilt trip the HELL out of the "officer interview" at Bakum. Make sure your #2 and #3 choices are infantry as well. So, Givati, Nachal, or Kfir. Put Givati as #2 and Nachal as #3, in my opinion (Givati is the one infantry unit that Golani kinda respects, so that's my bias, just to be honest).

You could always go to the Tzanchanim gibush and be sure of an infantry placement.

Another option is just sucking it up and doing sayeret wherever you get placed. My buddy got dropped from the Tzanchanim gibush because he busted his knee up and they wouldn't let him continue. He was a total beast. Didn't get selected for Golani either. They put him in Combat Engineers. He was so depressed. Ended up in their sayeret...total badass Yahalom unit. So, sayeret anything is major awesomeness.

In the end, my friend, the unit matters less than the kids you end up with. My group was awesome, so it was awesome. The August 2008 draft for my battalion sucked, so it could have been bad for me! It's all luck.

DO NOT STRESS ABOUT THE UNITS. Just go sayeret.