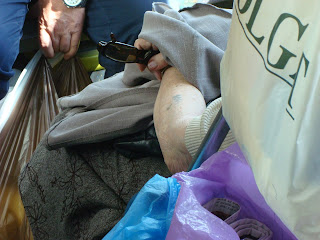 Reason 174 why I love Israel: Holocaust survivors living normal lives. I've been lucky enough to witness these amazing people doing all types of everyday things, and surprisingly, most of my friends haven't even randomly seen a survivor. That's a unique situation to be proud of witnessing, but when you live in Israel, you learn to appreciate what would be odd and potentially offensive in other parts of the world. Yes, I'm saying that randomly seeing a Holocaust survivor in Israel is "cool."

For example, on my first return flight from Israel in 2005 I sat next to Livia Bitton-Jackson, a survivor from Auschwitz who has written stirring accounts of her experience. She ended up telling me the most vivid, terrifying stories. I purchased her books a month later and found out that she had told me the worst of the worst. I felt quite privileged, and the full story of my few hours with her is and will always be one of my most cherished memories.

Though less personal, another time I ran across some survivors was on my way to buy a bottle of vodka with a friend. Across from my dorm in Tel Aviv in 2006 there was a little store that we often visited for our late-night alcohol runs. Like many makolets, they had a big screen TV positioned so people could sit at tables outside of the store and watch sports games. So, we were walking into the makolet and I just happened to glance at the guys watching the basketball game. Four men were playing backgammon, and being that it was late spring, they all had short-sleeve shirts on. Three of these men had tattoos on their forearms. I can't say I've ever had a more involuntary double take in my life.

A few months ago I was sitting on the bus and an old woman sat down next to me. I looked at her, looked down, and noticed the tattoo on her arm. I looked back up and we made eye contact... she covered her number with her shirt.

That same week I boarded a packed bus in the center of Jerusalem. Unfortunately, the kids in this country don't show much respect for their elders, which means they rarely get up from their seat in a crowded space to give to even the old lady with a walker. So, I stood near the front of the bus and instinctively looked around to see who was sitting who shouldn't be. Right there was a regular looking old lady with... 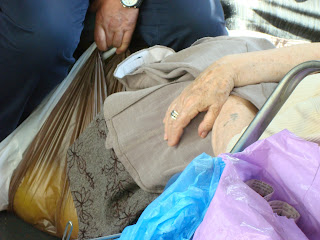 I mean, come on, where else in the world can you live history like this? And yes, if you were wondering, since I've had so many of these experiences I have become overly conscious of elderly people here. Every time I see an old person with a short-sleeve shirt, I look at their forearm. Every single time. Without fail.

I may have missed being a part of "The Greatest Generation," but at least my generation is really going to be the last to witness first-hand the greatest story of redemption ever known to man: Holocaust survivors living normal lives.

BTW, a story of mine about another experience with a Holocaust survivor yelling at me got picked up for an anthology, but it's been a very sketchy process... I'll let you know if that ever happens.
at 11:15 AM

that is pretty amazing....it still amazes me how people are still so ignorant about the holocaust...i have actually heard people say things like ..."oh, it wasn't THAT bad" or "oh, it was all exaggerated"...CAN YOU BELIEVE THAT...I mean excuse me but WTF is THAT........

It is amazing, Melissa. What's even crazier is you have people like Mahmoud Abbas, the leader of Fatah and the Palestinian Authority, our perceived best partner in peace, who has a PhD in Holocaust denial! That's what's nuts. I guess I have met many members of the conspiracy.

Maybe since I'm posting this I am a member of the conspiracy...

if the lady covered her arm w/ her sleeve, how are you able to get those pictures? do you have to hold a newspaper spy-style and sneak a quick pic with your cell phone camera?

Stephanie, my good friend, read closer! That woman who sat next to me was a whole different lady!

My grandmother and her friends were all surviviers and for years people didn't talk about the Houlercaust - it was a taboo subject.
Apparently in the 1980's people started talking, and as women deal with things, they would sit around a living room bringing up memories.
I remember being put to bed in the next room and hearing their stories, while drifting off to sleep. I had terrible nightmares.

I think the people, people in Jerusalem give up their seat for are Avrechim.