Israel's Use of English Expressions 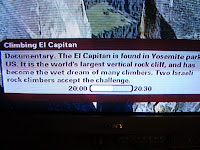 Being umemployed and sitting in front of the television all day has its rewards; like this gem of a sighting.  Go ahead and read that caption I captured from an Israeli tv program.

Teva HaDevarim, as far as I can tell, is attempting to be some sort of Israeli nature channel.  I would venture to say that they want to be the Israeli National Geographic.  So, it comes as something of a surprise when they describe "The El Capitan," which makes me chuckle intellectually, as "the wet dream of many climbers," which makes me giggle as a 23-year-old boy should.

I have this terrible mental image of some Israeli rock climber sleeping on the side of "The El Capitan" in one of those suspended sleeping harnesses, and then he starts to - um, how do I say this...

He starts to "climb" "The El Capitan" in a way that Nature did not intend.

Recently, many of the Israeli-American blogs, like mine, have been jumping on what seems to be a slew of goofs in Israel's use of English.  Signs, advertisements, food wrappers, you name it.  For example, check out these hilarious pictures my former boss Mikhael sent me.  Totally unbelievable that this country could produce something like that at a large tourist area (the Sea of Galilee).

Anyway, are these things ever going to get old?  Because there's this really really big chain of bakeries and coffee shops here, and they have this sign downtown...
at 11:09 AM

I'm sick of English infiltrating Hebrew, especially when a Hebrew word already exists for it, like "problemati" or "relevanti."

I'm pretty sure they know what a "wet dream" is. They're just not embarrassed.

Unemployed? What happened to your role as "IDT slave?" Did they lose ANOTHER client?

Yeah, the whole problem with Israelis is that they are not embarrassed. Nothing embarrasses these people. Can we say "choser nimus"?

IDT saved my life, so I harbor no ill will against them. I am unemployed because my computer broke. I worked from home in transcription, so now I'm done.

Not embarrassed? Agreed. But that can be a good thing.

Call it a cultural difference, and not hoser nimusim.

I have no doubt that if I visited the U. S. now, after 11 yrs, it would be a cultural shock, and I would probably be accused of cutting in line {and thinking everyone was a friyar}, even though here, I'm strict about not letting anyone cut in front of me.

I'd probably also get my tuchus kicked. Whereas here, I can talk my way out of things, get in verbal shouting matches, then go out for coffee with the guy I just fought with.

I prefer it here; it's more honest.

My fault was that I forgot how cut throat, ambitious Americans can be. I forgot how to "play that game," so I got screwed left and right.

Danny - that is hilarious. Good timing with the camera - you must have had it out and waiting for them to do something funny. Good work, gumshoe.

Thanks Rebecca. I was sitting there, noticed it, and rushed for the camera.

Look, ben-yehuda, you're being a little contradictory here. Americans are cut throat? How about Israelis who consider someone a friar and so they take that as a justification to totally screw them over. I call that cut throat.

Being an asshole and calling it a "cultural difference" is just another pathetic attempt at justifying the "Israeli mentality."

Having a shouting match over the price of a can of cola in public is not "honesty." As my friend and I determined last week, it's just plain low class. Anyone that butts in line, elbows people out of their way, doesn't say please or thank you, and just generally behaves like a gorilla is low class and CHOSER NIMUS.

Ps- I am coming to the States, but due to family considerations I had to leave by the end of July... I know you're mad about that, and I am dissapointed that I can't stick around till August. Sorry...

What I meant about American cut throats, was that was used to negotiating Israelis, and forgot how to negotiate around Americans. It can be different.

I have no doubt that you learned at William and Mary that generalizations are a no-no.