Who Needs A Translator?

My boss sent me these pictures. These are 100% real signs in the Lake Kinneret area, the Sea of Galilee, the Jesus place (and Israel's biggest freshwater source). My boss, Mikhael, is pretty dead on with his observation of whatever mindset could allow these signs to actually be paid for and displayed in public as legitimate warnings for a well traveled area. I mean, these signs just take the cake!

According to Mikhael, and I agree: "I think that Israelis are so PROUD of their English, that they won't dare ask anyone to proofread it. I've been taking pictures of signs and wrappers since I got here, too. From the Psak Zman "4-play" candy bar (to put you in that special mood) to Kenvelo's F.B.I t-shirts ("Inspect body girl" -- get it?!), to permanent storefront signs ("Burger's Bar"), they just will not ask a native speaker to give it a once-over before it goes to the printers, I guess." 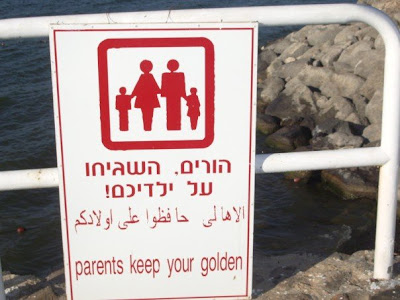 No, these are not Photoshopped. 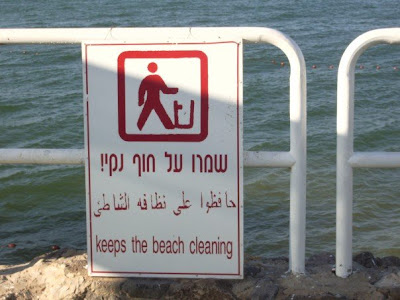 That almost sounds like an Orbitz commercial. Keeps the teeth cleaning! 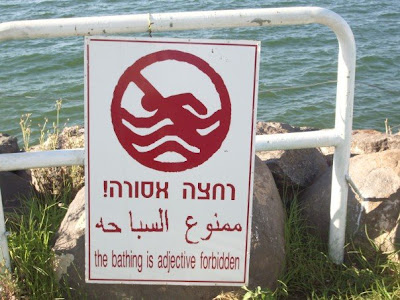 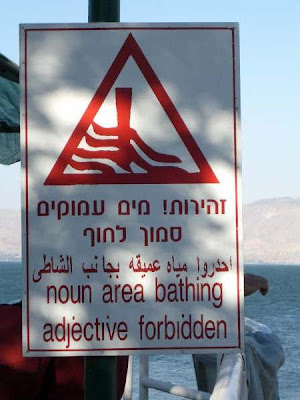 That one is probably the worst. It is, in no way, even just a terrible translation! It's on a different planet. The others were on the right track, with a bit of an adjective and noun shotgun blast. That one...

Heaven forbid the paid employee would stop any one of the thousands of Americans living in Israel and ask casually if their translation is correct.

Email ThisBlogThis!Share to TwitterShare to FacebookShare to Pinterest
Labels: Hebrew

The Arabic says exactly what the Hebrew says.

That you, lena, for the info on the arabic. Somehow that's easier to get right...

Aren't these absolutely the most ridiculous ever seen? I've never seen worse signs in Israel.

I've seen some pretty bad English in Israel, but these definitely get the prize.

I'm trying to figure out how they could possibly come up with these translations, and I'm just lost....

Oh Gd, I am still cracking up. I love funny signs like nothing else. Thank you Mr. Danny

I have been going over texts at my work ever since I was shown proudly a presentation for the US advertising our missile that one can lock on the target after the missile launch. Only the presentation said "after lunch", a far more leisurely affair.
A text given to a translation company came back in a horrific state: I was told that "the company promised that they would translate it again by someone who knows English well".

Ms. Rebecca, you're quite welcome.

Ruti - I allow us a little slack in translating obvious warning signs, but military presentations?!

ya i was gonna say that they looked familiar--from benji's blog...

u never answered me bout the religious/israel thing.
lama?
lost interest? gonna go in circles? forgot? none of the above?

Benji linked to me. The pictures are from my boss, who saw them in Tiberias.

I'll post a comment on the religious thing. I'm just not a fan of political or religious debates.

Truth is, neither am I.
I was just wondering what had happened--not necessarily anxious to carry on.

Lovely. The last one looks as if done in an online translator, where "noun" and "adjective" must be replaced with the suitable words. But none replaced them. And these things cost money! But still, as a translator myself, I deal daily with clients who think that professional translation is too expensive, and that they can get away with an online translator or "just give it to the computer guy, he speaks English". Tragic for them, LOL for us.