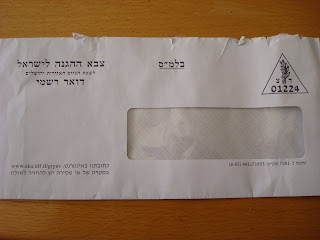 This envelope and her insignia mean many different things to various people; people inside and outside of Israel alike. This is the envelope that my tzav giyus came in, my I.D.F. induction notice. That sword and olive branch symbolize hope, peace, and security for a weathered people. The words Tzava Ha'Hagana L'Yisrael, Army For The Defense Of Israel, speak righteousness in my ears. I came to Israel to join this society, this culture of defense, these people that must serve together or face sure extermination. I came to place the seal of the Israeli Defense Force on my chest, no matter what anyone thinks of me or my decision. To think, all of this symbolism on a simple envelope!

But, as I have learned over the past few years living off and on in Israel, how different are our dreams from our experiences, how trying is the daily life in pursuit of a goal, how unideal our idealism can be! I dream of the day when I will stand tall and proud in this country, this unceasingly difficult to navigate country, unafraid of failure, defeat, and the dissolution of what I have set my sights on with the greatest of determination. I am lucky enough that my dream in life is so easily definable, a dream that I know I can achieve, but in no way does that mean that the gods have decided to take it easy on me.

The expectation that dreams will come easy is the fault of idealists with their heads in the clouds and their feet on the mountains. I can't tell you how many times I've heard from adults that "You're idealistic because you're young. That will pass when you see the real world." I disagree, of course. Idealism is not bound by time. Idealism isn't killed by the presence of reality. Rather, it is crystallized as strictly a dream by the very lack of reality. Our ideals and idealism and ideologies need not be attenuated for even a single day.

As a matter of fact, many grown adults, the greatest men and women of our history books, went to their graves with their undying passion decreased not a notch from its initial conception. Would Theodore Herzl, John Adams, Eliezer Ben-Yehuda, Susan B. Anthony, or Ben Franklin be the recognizable names that they are today if they subscribed to a defeatist attitude? No, of course not. Idealism doesn't die with time and reality. It dies with a failure to cope with the day to day struggle of living for a cause. If a dream is true and righteous, and the dreamer is conscious of his struggle's implications, even the greatest obstacles can be taken on with an indescribably joy - a reassurance in knowing that each assault on the realization of this dream is a sign that it is something worth fighting for. The greatest goal is always the most contested.

With all that high and mighty contemplation on dreams and goals and passions, those cliche words that I can't help but use, I think it's finally time that I get to the point of this post. Men and women like Herzl and Anthony and King faced real difficulties in the pursuit of their dreams: poverty, public indignation, death threats, insurmountable odds in the practical application of establishing a new country or changing thousands of years of discrimination. Those are enviable challenges to add to one's resume when accomplishing a goal. The names that exist in our text books knew real stumbling blocks.

So, what's the hardest part of my personal journey? What causes me to lose sleep at night? What takes my hope and determination and twists it into a little ball of doubt and hesitation? I wish I could say that the public wouldn't understand my beliefs, that I would be a person beyond my time, but I am just one of thousands joining this army. I wish I could say that I face poverty, but the truth is that I will be paid for my service to this country, a luxury many idealists traditionally can't rely on. No, and I hesitate to be so honest, but the greatest obstacle to me attaining my dream, the element of this pursuit that distresses me the most, is sheer embarrassment!

Have you watched the movie Full Metal Jacket recently? If not, here's a clip of the beginning of that film. If you have bad-language sensitive ears, I highly recommend just taking my word for it that boot camp commanders are not nice people.

The truth is that I am not afraid of the traditional possibilities that are inherent in joining an army. Because I see this army as a great miracle, that there is a Jewish fighting force wearing the Star of David after 2,000 years, that we are a real army with a record of unfathomable accomplishments, because this army is itself an ideological dream, I am proud to be a part of her in any capacity possible. The gift that I, of all the generations that have lived before me, have the chance to actively defend the Jewish people from savage enemies - It would be a sin to say no. My idealism easily conquers the fear of fighting.

All that pride and idealism was washed away in an instant, however, when I started talking to a very attractive and very uninterested female soldier in the army recruitment office a couple weeks ago. I had to go in to give them a copy of my diploma (which is in Latin, by the way, so I wonder what kind of looks that thing prompted) and sign some request forms. Going upstairs to hand over the diploma and give them some more information, I spoke Hebrew the entire time without any difficulty. The girls in that part of the office didn't seem to have a problem with my Hebrew, and I didn't have a problem understanding theirs. Fifteen minutes later I felt pretty damn good about myself and my journey.

And then I had to talk with Little Miss I Hate My Job. I was shepherded into a closet, a room with two desks and about two feet by two feet of free space for me to stand in. I figured I would jump right in with the 'Brew.

Simple Hebrew, simple request forms, but she looked at me like I was speaking Greek. Now, why was it that the girls upstairs treated me like someone who does speak Hebrew, and this girl was looking at me like I had a third eyeball? Needless to say, her immediate switch into English killed my spirit.

Eventually we got to the part of the request forms where I had to give reasons why I wanted to move up my induction date to the army. All in English, of course, I explained that I am going to be older than the other guys by about five years, so I want to just get in there and get the waiting over with. As she was writing all of this in Hebrew, I mumbled "אני ישן".

Stupid, stupid mistake. "You are what?," she asked. After a second of looking at me, she began laughing the heartiest laugh I've heard in years.

"Yashan?! Did you just say that?! Yashan!" She couldn't get enough. She looked over at the other girl in the office, who was leaning halfway off her chair trying to figure out what was so funny, and began speaking Hebrew that I unfortunately understood quite well.

Here I was, standing in the middle of this tiny little office with my backpack on, looking around, totally realizing my mistake in using the word for old that is the opposite of new, not young, and just having to shrug off two cute girls' laughter at my expense. And then they turned to their commanding officer who was sitting in the adjacent office and filled her in. Some guys who were there doing paperwork looked at me and shook their heads in disdain. I was the butt of the joke.

After the laughter died out, my considerate and compassionate Israeli sister looked up at me and said in English, "Your Hebrew make me laugh today. Thank you." Unable to resist, I leaned forward, placed my hands on her desk, and said "Your English make me laugh today too."

I guess you have to keep a sense of humor when it comes to these things, but think about my position! Here I am, joining a far-away army, and I am barely proficient in the language. Israel's army was founded on the backs of immigrants, and it continues to be the only sure way to integrate foreigners into the society, but that doesn't mean it's easy to be the guy who is only 50% sure of what's going on, to be 30% sure of what to say, and 5% sure on how to say it.

But as I said before, if dreams were easy, they wouldn't be dreams. If I spoke fluent Hebrew, I would be like any other Israeli. The army wouldn't be a dream, but rather a requirement or responsibility. If you ask the average Israeli if they were in the army, they'll say quite matter-of-factly, "Yes. Why?"

If you ask me in a couple years if I served in the army, I think you'll get quite a different response. You see, the obstacles to our goals that seem so Herculean at the time, those very obstacles become part and parcel of the goal itself. Not only are your obstacles unavoidable, they will come to define your path, and even give greater purpose to it.

And if you find yourself laughed at, like I was, remember this quote by Viktor Frankl: "The attempt to develop a sense of humor and to see things in a humorous light is some kind of a trick learned while mastering the art of living."
at 11:42 AM

Bona ben adam... chaval al hazman. I am a long time reader of your blog, but on this one I just had to reply. Very simple put- you should be very proud of yourself.
And don't worry about pkidot misrad. You should just politely ask them for a cup of coffee like they do to their boss :P
I had here more then what you had there. It's not fun, sure, but trust me, after some time, you will get better and better.
By the way, I was impressed by your quickness in replying her- I would be too embarrased to do anything...
There is an old group of commedians called Hagashash Hachiver. They had a ma'arachon about immigants- how each group was laughed at when it come la'arez, and how that group in turn laughed on the new immigrants. Just part of human behavior.
I guess you won't be coming to visit WM any time soon, but I wish you all the best. I like hearing of your advantures :P

Ro'ee - I just a few nights ago saw that comedy thing. They showed it to us at a party for ulpan. It was actually very funny!


T-Rock - My email address is "dannybrothers@gmail.com"
Glad to make such a wonderful person's day!

This is awesomeness in its purest sense.

Especially being older than the rest of your unit. Man. Respect.


(I have pages of mistakes I first made when I got to Israel. I know it's diff when you're in the army, when you're dealin with life and death etc but still--maybe it will make you feel better?)