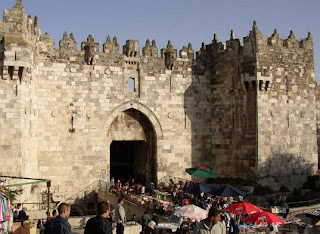 A couple friends and I recently spent the day exploring some of the lesser traveled areas on the average Israel journey in the Old City of Jerusalem. As one of my comrades put it, it's like walking into a totally different country. One minute you're in the Jewish Quarter of the Old City, a safe, clean, relatively quiet area, and the next you're in the Christian and Muslim Quarters - not exactly the place you want to get lost in when the sun goes down.

No, no, it's really not that bad, but honestly you feel kind of good when you see a fully strapped Israeli soldier standing on the corner. He's like that blue light found on college campuses. If something goes wrong, just run to the light.

A Turkish friend of mine, a Muslim, was in the Arab Shuk a few years ago with his Turkish buddies when they started talking about Yasser Arafat. Since they were speaking Turkish, the Arabic speaking Muslims around them only understood the name of their revered leader. This was taken to offense, and my Turkish friend and his group were quickly surrounded by angry, hostile young men.

They were saved by a swarm of Israeli soldiers with drawn M16s. If you get in a fight in this area, as occurs occasionaly with yeshiva boys taking shortcuts not worth it, there's a pretty good chance a knife might find its way into the fray. Don't worry, though, the massive majority of the residents of this area are interested in only one thing, as they rightly should be: Tourist Dollars.

After our trip was over, we exited the Old City from the Damascus Gate. This puts you on the outskirts of East Jerusalem. As we walked up the street towards home, we passed a park which is a favorite hangout of the Arab residents of the area. Two ten-year-old boys greeted us.

"Where you from?," they shouted from the low wall they were sitting on.
"Jamaica!" I couldn't resist throwing in my best Caribbean accident.
"Jamaica," the boys repeated, "Jamaica?"
"Yeah."
"Shut up. Shut your mouth!"

We continued walking, occasionally looking back as the boys yelled out to us.

"Yes, I'm talking to you! Shut your mouth!" Smiling, they continued to yell. "You are asshole!"

And the piece de resistance?

I love this place, and all the happy residents in it. By the way, did I mention that I saw the customary Yasser Arafat portraits in the Muslim Quarter, as well as a new sighting, a poster of Saddam Hussein standing galliantly with his gleaming sword?
at 5:54 PM

I had a conversation with some kids in Akko which went like this:

Them: Shalom
Me: Shalom
Them: Ben zona!
Me: (laughing too hard to point out that it should be bat zona)

I also want to say "asah lama lakum" to them, but I'm afraid it may not be taken well - not sure why, just get that feeling.