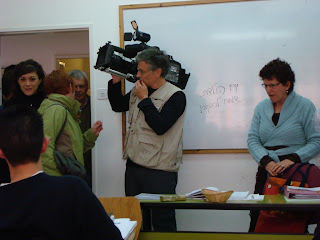 I've said over and over how this country is the international hub of the Jewish world -- and maybe of the Christian world, as well, considering that while walking through the Old City a few days ago I overhead a man say, "Well, it's more fun to love Jesus, anyway." That made me smile. Hey, you help our economy, you can love Jesus all you want!

Last week we were sitting in class, mumbling through our lessons with our typical laziness, when there was a knock on the door. About 5 people were out there, some rapid-fire Hebrew took place, which I caught just about zero of, and then all of a sudden a huge camera was in our face.

Apparently, the largest news provider in Brazil wanted to get a piece of the Hebrew action. Once a week, according to my Brazilian friends sitting next to me, that particular TV channel does a piece on some interesting thing. I'm not sure if it's always an international topic, or just whatever catches the producers' attention, but they've decided to do a bit on Israel.

This cameraman came into our class, stayed in there for about 15 minutes filming all of us while everyone except myself tried pathetically 100% harder to look like good students, and then left with all of our souls in his digital device. Well, minus the last part, of course. It was quite humorous to me to see everyone sit up straight, wipe the gunk from their eyes, hack up the morning mucus of reticence, and excitedly respond to our teacher's own amount of added effort: "Binyan?" "Hitpael!" "B'atid?" "Teeshtataef!" "E'zeh talmidim!" "E'zeh morah!"

Not that I'm better than anyone else, or that I'm cooler for not joining in with any added enthusiasm. Not at all. I just found myself to be, believe it or not, quite camera shy. Hey, Brazil is a big country, with a lot of people. Presumably a few million people may see this thing. Doesn't that make anybody else discomfited? At least I wasn't one of the people who got that super bright, super scary camera shoved in their face. If that's the price of my 15 minutes, count me out of time. It was so hilarious when he got down on our Ethiopian student's face, zoomed way in, and just held it on him for about a minute. I think he felt the same way as me. He's had enough excitement in his life. You know, the whole escaping genocide thing.

I probably would have told him to bugger off, as the Brits say. Coincidentally, I was caught on tape again by this same group as I was eating some falafel out in the New City. And then, that same day, they caught me as I was leaving the Old City. Can't a brother get some privacy? Sheesh. 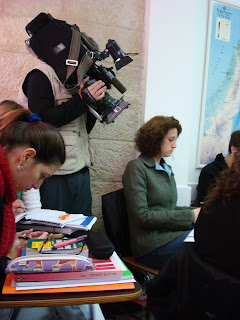