Today our teacher, Sara, brought in Hamantashen and candies. We were doing a written exercise, she left the room, and then returned with a huge smile and an even more massive plate of these scrumptious Purim-time only pastries. Remember, this woman was born in 1947, so to see her bound in and float around like a 16 year old, well, something had to be up.

She says, "I'm extra happy today! I have a new grandchild!" We all congratulated her, of course, and asked questions for about the next 20 minutes. I have to say that the best Hebrew practice is asking someone about their life, their family, their histories. Turns out, however, that her son married an American girl (whose father is Israeli) and they moved to Holland about 5 years ago. Sara says there is "no chance" that they will return. She said the kids will probably return when they're our age, and she'll teach them Hebrew in this very room. She has a good sense of humor. Still, it's very sad that her mathematician (PhD) son chose to leave the motherland and his people.

Even more sad for Sara! I'm not sure, and no one mentioned it, but when I asked if he will return, she said "no chance," and turned to the side a little. I think her eyes teared up, she lifted her hand to her neck and rested it there, and didn't say anything for a few seconds. This was pretty much when I was the only one talking to her, but it seemed fairly clear to me that she was momentarily emotional. That passed quickly, however, and she once again took up the plate and forced more and more candies and pastries on us. She was literally dumping chocolates onto our tables. I told her she really is a Jewish mother -- er, grandmother!

On that note, here's a store in Tel Aviv on the main shopping street of Dizengoff that my grandmother should enjoy. 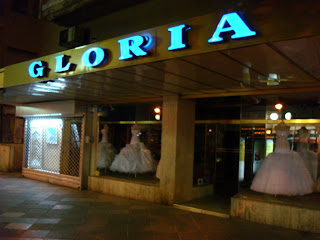 please add pics of you to the blog! They would make it so much better!

It took me about 20 minutes to think who would willingly call themselves "fatty." I thought maybe it was someone from home, from our synagogue, an old lady called Fannie, and she just messed up the typing.

BUT THEN I REMEMBERED! T! Man, seriously, I think you're my b'sheret!

Thank you for the comment you left on my Blog. Your blog is great and I added your site to my Blog roll. I would appreciate if you could do the same.
Thank you,
Shimshon

Thanks Shimshon. Got ya.