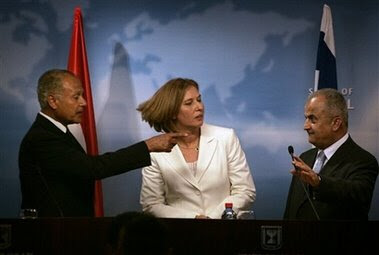 After a Jerusalem Post report uncovered a secret Israeli government ban of the Qatar-based "news" service Al-Jazeera, the foreign ministry decided to play it straight:

"The official's statement came a day after Foreign Minister Tzipi Livni ripped into the Qatar-based network at a meeting with ambassadors posted in Israel, saying that "when depicting Israeli attacks, Al-Jazeera abuses the situation on the ground by telling lies. Unfortunately, during these attacks [in Gaza], civilians were killed. I am not trying to change facts. But, of course, when it comes to Al-Jazeera, everything is exaggerated."

Tzipi Livni "ripped" the network. She did it in front of a roomful of ambassadors. She most likely wore a snappy business suit. Al-Jazeera is painfully anti-Israel, preposterously biased for a news service that claims to be unbiased, and they deserve to get shut out from having access to the government. We are banning them from entering government offices, and consequently they won't be getting interviews from officials. Tzipi says so!

I'm not sure if this is smart or short-sighted on our part, considering that they twisted our words before when we did grant them access, and so now they will most likely twist them even worse... I don't know about that, but I do know that I like Tzipi Livni. To be honest, I don't know her personal political leanings or anything. She is, however, too close to Olmert, who NO ONE likes. She's his right-hand lady, so she sometimes tows the party line, but she's all business. Who doesn't appreciate a woman that stands up to the leaders of the world and flips her hair and says, "hey, shut up, I'm talking." I don't know if she has ever done that, but I'll just go ahead and say I bet she wants to.

And I have a thing for older ladies, especially the type that could beat up the president of Iran.
at 8:08 PM

Hi, first visit here, I like this place. I'm Serge from Canada.

I also like Livni, although she is a liberal. I'm more of Netanyahu fan. Actually, I'm a Kahane fan, so you can imagine that Livni's position is too weak in my opinion. She shouldn't give away any land, no matter what. That's my opinion.

I discovered her by watching this...

...it's a long video, 56 minutes. Very interesting though. Smart woman, no doubt about it.