OK, I get it, rice and drains hate each other.

Here's another "jeez, these Israelis," type of post. Strangely, at the same time, there's also another "wow, this place," theme to this here little post. This country just keeps me on my toes...

The bus system here runs on EXACT time, in my experience. If you're 2 minutes late at the central bus station, you might as well forget it. That bus has come and gone. But, in a stroke of Middle East inconsistency, I walked out of my apartment this morning and saw my bus take off before I could catch up. Then, contrary to the typical 5 minute wait for the next round of buses, I stood in the cold for 45 minutes; waiting, waiting, no transportation in sight. By the time the next Green Machine rolled up there was a line of about 20 people pushing to be first in line. After I got on and started my homework (hey, I'm busy), a female soldier (yes, she was very pretty) sat next to me, and proceeded to watch me do every bit of the page in the workbook. How stupid she must have thought I am! "Don't swim in the water, it is too deep, and you don't know how to swim." "What are you drinking? An alcoholic drink or something else?" Etcetera.

So, at each stop there were about three to five times the number of people that usually are waiting for the bus... I can't say I didn't enjoy the old women yelling at the 25 year old driver. I can't say I didn't, especially as I found myself 30 minutes late to class. An inauspicious way to start a rainy day in the Holy City.

The day dragged on, but eventually I found myself back at home. I started working, as per my 2:30-ish to 9pm-ish schedule. I haven't posted about my work, as it is relatively new and fairly secret at this point, so I'll post eventually on that -- yes, I work for the Mossad... They are in desperate need of English speaking hitmen, I think.

Well, as I was saying, I got home, started working, got about two hours into it, and then heard some feverish knocking on our door. We have a back yard, as you could see from the snow pictures I posted, but there is a gate back there. No one outside of the few apartments that share it has access. We really never use that backdoor. So, I heard this knocking, and couldn't figure out where it was coming from. I walked to the front, thinking it was probably the mailman. He has come by trying to deliver the same envelope to us, one that doesn't belong to either myself or my flatmate, for the last month and a half. I figured it'd be a quick, "lo, lo, ze lo shelanu!" brush off... yeah, did I forget where I live?

I realized it was coming from the oft neglected backdoor, the one that is directly adjacent to our next door neighbors, an older couple that we've had... let's just say we've had our encounters. And, of course they don't speak English, so that's always fun for me as well. You think you know frustration? Try to defend yourself in a language that tends to tumble out of your mouth like accidently spitting out your gum while laughing. After about 10 seconds of him saying something about our kitchen, he says, "OK, let me just see," and all of a sudden he walks past me and into our kitchen. Just like that. Hello, how are you, blah blah blah in a strange language, and then some guy is pushing aside your dirty dishes.

A long, long story made short, I ended up taking about 30 minutes to plunge our kitchen sink. Apparently, our water system is connected to theirs, they pair up and run out to a single drain, and "in five years, five years we have never had a problem. As soon as you guys moved in now our drain is always clogged! I came home one day and the sink was filled to the top with backwater. This is not good. You understand what I'm saying?"

Yeah, I think I got it after the fifth time. Really. Yes, sir, I will indeed keep that drain cover in place from now on. He got so into it that he ended up using our dish sponges to scrub, literally scrub, down our sink. Then, he took all the junk that we plunged out and put it on one of our plates that was sitting next to the sink. It looked like a nice little dish of pâté, actually. Just imagine me standing behind this man, mouth agape at him scrubbing down a rather filthy sink with rather clean brillo pads, mouth agape at him speaking some rather fast Hebrew, mouth agape at how many times he said "keep the drain cover on," mouth agape when he knocks on our door again to give me a new drain cover. Ours didn't fit well, he said.

I felt pretty bad when the one he gave me also didn't fit well. Oh, and I met his grandson. Interesting day, I'd say. Oh, wait, not over yet!

Some hours later, as I'm listening intently to an audio file for my job, I hear a major commottion. Occasionally they have what seems to be some type of parade on the street, with a religious minivan making its way along the street. I never really go out to look at it, mainly because I'm busy, but also because it's so preposterously loud and obnoxious. Imagine $20 dollar speakers blaring '80s hair-metal: obnoxious. Well, this is $5 dollar speakers blaring Hebrew religious music, which can be nice music, but not when it's coming from a minivan while you're trying to pay your rent.

So, I took a look. I'm not sure why, but I think I know exactly what this was. I'm pretty sure this was a bar mitzvah procession. You gotta remember that this is Israel, that this is a country of Jews, and these types of things are fairly commonplace. Especially in the Sephardi communities, like where I live, where tradition is paramount.

I stepped out of my apartment, walked towards the blaring minivan, an old beater decked out with Christmas lights and Hebrew signs, and realized that they actually had a police escort. There were probably about 50 to 75 people walking behind the creeping van, cheering and singing and dancing. They were walking with a canopy and carrying a very Sephardi-style Torah, the crown of the Jewish people, lifting it up skywards while belting out ancient songs as if they themselves wrote the words yesterday.

It was a jubilant scene, a loud group, and I noticed with not a small amount of satisfaction that my neighbors were all at their doorsteps as well. Sometimes I like to play it cool, you know, act like Mr. Imperturbable; So, when I really want to take a picture of something that I think sticks out, and I see that all the time in this country, I always have the thought "they probably think you're a silly tourist - a total newbie." But, no, they were also watching the festivities.

I took a few pictures, but most of them were pretty terrible. But, here's two that you can at least get an idea of what was going on. The first one is a shot of the minivan. It's very blurry, but I think it looks kinda cool, so I put it in black & white and I like it. Considering the photo that won the World Press Photo of the Year, I don't think I'm too far off... The second one is a pretty hard to see shot of the people carrying the Torah. It's the full size image, so you can click on it and zoom in, or better yet download it and fit it to screen to see it all better.

And, this is just Tuesday. I already saw something absolutely outrageous today, which I also photographed, that I'm saving for a post on Friday. Tuesday. This place is unreal. 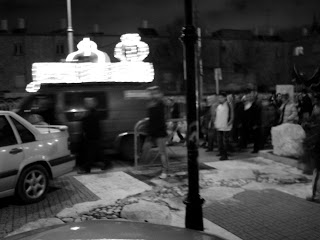 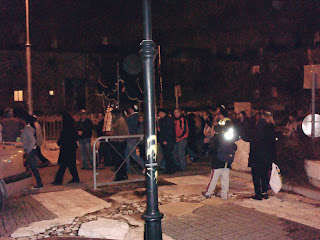