Tel Aviv is a real city, as opposed to Jerusalem. They stay up late, stores stay open till the wee hours, and there are tons of clubs. I heard once that the beach area of Tel Aviv (it's on the Mediterranean) has more clubs per block than any other city in the world. Not sure if that's true or not, but there are a lot, I know that. I feel like Spain or Brazil probably has to take that award, though.

Anyway, as I was walking around at 4 AM in a residential area of TA last Thursday, I noticed this interesting sandwich shop. 4 AM and they were still making custom paninis and baguettes from a kiosk building (typically coffee stops), and I was quite tempted. I opted for a picture, instead. 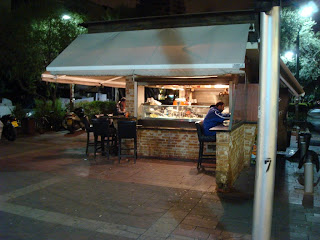 Also, like the Star of David drawn on a bus window sill that I wrote about a few weeks ago, an unlikely Magen David caught my eye. Right there in the entrance of a not so religious clothing store, an "immodest" style of clothing, there was a Star of David on the floor. It was very pretty, made out of what looked like small tiles, and glittery. Just right there in the entrance to an Israeli - not "Jewish" - clothing outlet, a tiny boutique, there is our heritage. In the midst of an area that even goes so far as to call itself anti-religious, you cannot escape the Jewishness of this land and people. Again, reason #247 that I love this country. 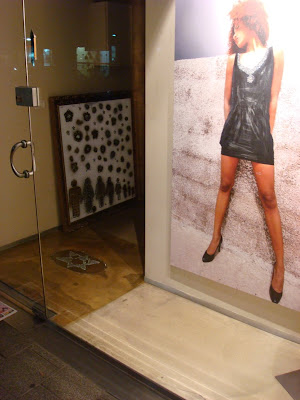 Where is this sandwich place? Ben-Gurion and Diz?

Not sure what the intersection was, but it was Dizengof and something. Near the KFC, I believe.

The place looks as kiosk on Rothschild, isn't it?

Renata.. pretty sure it was Dizengof. My friend lives on Nordau, and I was walking from there... Nordau and Dizengof, right? I mean, I don't know if Nordau also connects with Rothschild, but I think I was on the DIZ. Not sure! Anyway, looked good.