Not Quite A Baseball... 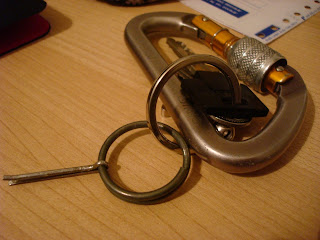 Two weeks ago our platoon commander gathered us together and had us suit up in our vests and helmets. We lined up at the staff sergeant’s storage room and he called to two of the guys to grab a brown ammunition box. Also, we had flak jackets and goggles, a stretcher, radios, and even the water pack. In short, we were fully geared up.

As usual, they were telling us nothing. We didn’t know what was in the box, why we had flak jackets, and definitely not where we were going. We just started walking behind the commander, who was up front talking on the radio quietly, barely audible.

“Yeah, we’re heading there now,” he whispered to whoever was on the other end.

I learned a long time ago to just kind of go with the flow. Who was I to ask questions? Some of the guys tried to get some information from the staff sergeant, but he just shrugged them off. Finally we made it to the entrance to the base, which leads to a set of shooting ranges reserved for advanced training.

Instead, we left the base and went in the opposite direction. At the edge of a parking lot, bordering the hilly, grassy, rock cratered buffer between an Arab village and our base, the platoon commander told us to drop our gear. After unloading we stood in formation, fully confused on what the hell was going on.

“You’re currently classified a Rifleman 03. You’ve done some shooting, learned about various weapons, successfully performed field battle movements, and so on and so on. Today, however, you’re going to become an 05, the last classification before your final 07. This is mandatory, so if anyone is too scared to do it properly, you might as well request a transfer right now.”

By this point even my curiosity was through the roof. Within minutes, however, we all found out that the time had come to throw a live grenade. The previous week we learned all about the various hand grenades used by the army, from smoke grenades to frags, flashbangs to sonic blasters. We knew it was coming, and I’m not sure if there was one unexcited face in the crowd.

Our smiles were soon displaced with seriousness as the company commander, a demigod of sorts to us privates, marched up to our formation, radio in hand. The unknown receiver on the other end of the radio being revealed, and the gravity of the situation well established, we listened raptly as he informed us that this was not something we were doing for fun, but rather as a part of our new professions.

“Yes, Company Commander!,” we shouted. I think we actually meant it this time around.

A long story made short, the way the day went was actually pretty great for us. We had to wait for literally hours as one by one a guy ran out to the throwing range when instructed, after the guy before him finished. BOOM BOOM BOOM we heard all day, the smoke rising quickly from inside a blown-out hole in the ground. At first the explosions, a deep thud that resonates for a greater distance than you’d imagine, had us yelling in excitement. After a while, however... well, it was just old-hat. How strange is a normalized irregularity.

Eventually the squad commander told me to put on my helmet and grab a flak vest and head out to the sergeant. After getting there, the sergeant told me the way it was going to work. I was to wait until the guy before me threw his grenade, and after hearing the explosion I was to run to the throwing area.

At this point he opened the brown ammunition box we carried from his storage room and took out a single green hand grenade, just like what you see in the movies. The grenades sit in a Styrofoam crate just like eggs, circular and all. They look so peaceful all lined up and insulated, unmoving, unthreatening.

“Grab,” he said as he carelessly thrusted the grenade into my hand.

My heart probably skipped more than one beat, to be honest. To be clear, I wasn’t scared. It’s just kind of one of those situations you want to do perfectly, you know? I didn’t have much time to think about it all, however. Before I knew it, BOOM! The guy before me had thrown his, and it was my turn. Time to run! Real grenade in hand, gripped tightly as possibly! Is this safe?

“Hurry,” the sergeant instructed, and I ran the couple hundred meters to the concrete barrier where our platoon commander was standing.

“Daniel,” the platoon commander called out to me as I drew near, grenade in hand. “Are you nervous?”

Without even hesitating, or trying to be the typical tough-guy you have to be in an army, I responded naturally and honestly. “Hell yes!” I said. He only smiled. I took that as him actually saying, ‘Don’t worry, it’ll be cool.’

Before the live throw you have to practice with a dummy device. Standing inside a concrete barrier the shape of a T, you pretend to throw a silver replica of the real thing. Simple enough. One strange drill you do, however, is what to do if a live grenade falls into the barrier. As you can expect, you run out of the barrier as fast as you can and jump on the ground. The platoon commander, a commissioned officer and your major authority on a day-to-day basis, then proceeds to jump on top of you. More than a few of the guys actually had bleeding cuts from how hard he fell on us. How strange it was for him to touch me. He’s just so detached from us physically...

Anyway, after only a simple practice of each scenario, he told me to grab the real thing and enter the barrier with the grenade positioned outside the concrete walls. “Already?,” I thought to myself, but of course I did as I was told. I was ready, but I just felt like something else was supposed to happen. It was all so surreal, if you can’t tell from my lackluster explanation.

I’m no Hemingway, and I feel more frustration than you know over this, but I just don’t have it in me to properly describe what it feels like to throw a grenade, to hold your life so tangibly in your hand. You pick up a live hand grenade, a simple tiny little thing no bigger than a baseball, and you just know what it can do to you. I looked down at the grenade and couldn’t help but see the terrible possibilities. Think about it like this:

We drive our cars every day, real devices of destruction, with reckless abandon and no thought of its dangers. Most people don’t get behind the wheel of a car and feel trepidation over putting the key in the ignition. How many ‘close calls’ have you had in your car and shrugged off after a minute? Now imagine having a ‘close call’ with a freaking hand grenade.

And just like that, a bone-shattering thud rocked the concrete barrier. We waited a second, and then the commander pulled me to my feet.

“Let’s see...” he began, but was cut short by an acrid smoke that blew thickly in our faces. I couldn’t see a thing, and my throat, nose, and eyes burned from the deep orange-yellow smoke. Though I wanted to move out of the way, like a tough-guy I stood still, not making a sound.

“Very good. Run back to the sergeant.”

It was all just too bizarre, and they don’t give you even half a second to process any of this. It’s a run-throw-run kind of thing. But as I ran back I was still gripping the safety pin from the grenade, the ring that you have to pull in order to activate it, wondering where I was going to put it.

As you can see above, it found it’s long-term home on my keychain. What a normal place for something so not normal.
at 11:55 PM

Well just like in the movies, as long as you are pressing that little handle down, it won't go off even with the safety pin out. But yeah, it's just a few seconds. I'm not going to say exactly how many, don't know if I'm allowed to, but it's a matter of seconds, not split seconds. Honestly, I was a little surprised how fast it blew up, but that might have been my skewed perception!

But to answer your question, typically between 4 to 5 seconds.


Danny: good post brother. I'd imagine that was easily in the top 3 most exciting/nerve racking/scary things you have done in your life. Keep it real.

Great post, Danny. Really reminds me of the first time I had to throw a grenade. And even though it was a different country and a different army, the procedure and the thoughts I had while doing it where exactly the same!