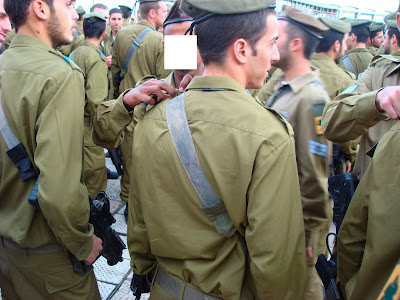 This past Thursday I finished tironut, which is basic training. It lasts for three months, and in actuality it’s about half of my training. After basic you have advanced training, and after that you have what’s called “kav,” literally meaning line. As far as I can tell, it means line of combat, as in training on the line. On-site training, if you will. By then you’re a real soldier, though, and you’re just getting some experience under your belt.

Either way, basic is about half of your training as far as my opinion goes. In kav you’re putting into practice what you learned in basic and advanced, so when people ask, I now say that I am “halfway done with training.” Maybe that’s speaking too soon, but if you went through all the discipline and belittlement of an army’s basic training program, you too would say anything to put all that behind you.

On Thursday we had a day of activities in Jerusalem, culminating in a ceremony at the Western Wall where our commanders took off our blue basic training identification tags from our shoulder epaulettes (see above pic – had to blank out Commander Sweetheart’s face). Finally finally finally we don't have those markers on our shoulders, screaming “HE’S A NOBODY!” I’m still a nobody in the army, but the most noticeable symbol of that is now gone. When I’m out in public with my uniform, I’m no longer the lowest of the low on the totem pole. I’m in advanced training...

Still, that’s worth very little. I’m just happy to be done with all the stupid stuff you have to do in basic that I never felt like putting in this blog. Stupid stuff like what it means to stand in attention. For example, your platoon is given ten seconds to get into a formation and receive the commanders.

“Nobody move, nobody move!” calls out the soldier standing out of formation in order to receive the commander. “OK... For the reception of the staff sergeant, the platoon, stretch to attention, 2, 3...”

Commander Crazy Eyes would stand in front of us and just look for an excuse to put us into the pushup position. “Peretz, did you move?”

“I shifted my weight from my left foot to my right...”

“Yes,” he would answer sheepishly.

And then if someone was slow in dropping down, he would punish the group as a whole. “Thanks to Elkias, diamond position with your hands,” he would demand. Do you know how hard it is to do diamond pushups with a combat vest on?

That’s just one example, a stupid little thing, of all the stupid little things you have to endure as a soldier in basic training. I know for a fact that it is much worse in the American army, and I’m not complaining, but still for a 24-year-old to be bossed around by 19 year olds, it’s just obnoxious sometimes. But I endured.

To buckle down to the matter at hand, the point of this post is something of an expression of regret. Though I’ve written many posts since I was drafted back in November into Golani, so many things have not been written. I mentioned before how I wished that I was a better comedy writer, and I say that because basic training was just so hilarious. I wrote a couple funny stories, like the one about the chocolate wafer bar incident, or the cardboard girlfriend incident, but honestly every single day something hilarious happened. Every single day I was laughing, we all were joking around about this or that, or the commanders had someone do something ridiculous that was done solely for the purpose of their entertainment.

How about the joker of the group who they constantly pick on? Could anyone help but crack up when they make him pretend to be a fencer with a wooden twig? He does it so seriously! Or how about when a commander once took off sprinting to the dining hall with us, but then his Golani beret fell on the ground, which is forbidden for us to touch since we haven’t earned ours yet, and so we all dropped down in the middle of the training base in our defense 360 degree combat maneuver in defense of the “fallen beret”? We laid on the ground and started yelling “FIRE FIRE FIRE FIRE FIRE” while moving as a unit into the necessary position for protecting an injured soldier. I just can’t write that the way it happened. I just can’t convey how comical it was, and how many bystanders were dying with laughter.

And that is just touching on the funny stuff. What about all the serious stuff? What about how something very serious happened during the Gaza campaign involving someone’s relative? I can’t even say more than that. What about the guy that did something very serious to himself by accident and then had a disciplinary interview with the freaking battalion commander? I can’t even say more than that. I wouldn’t even write that stuff if I chose to write a book after the army, even though I’d have no fear of repercussions like I have with this blog.

I am expressing a degree of regret in that I am not able to fully convey all the amazing and wonderful and funny and terrible things I’ve experienced in only four months of the army. More than that, there are so many topics I just didn’t have the energy to touch on. Lately my energy level for being able to write has dropped severely, and just cranking out these words is difficult. As our training gets more intense, my dedication to this blog drops. That is regrettable, since I get so much out of writing.

What I’m trying to say is that I am so proud of myself for getting through basic training, both in terms of the training and in terms of keeping this blog. But, I also want to warn the audience that there may be a decrease in the frequency of posts in the near future. I don’t plan on it, but I just don’t know what will happen. We’re about to go live in the field for the majority of the next three months, another topic I haven’t discussed at all but that is so important to our training. All you do there is secretive stuff, like how to move in combat as a group, and obviously that can’t be included. I’m trying my best here, you know.

In conclusion, do you have any idea how relieved I am to be done with the high-level discipline crap? Finally I’m back to being a human being. Finally I’m going to be just doing soldiering stuff, a little bit of discipline, but mostly learning without all the “five minutes, switch into your work uniform... or else” kind of treatment. The training is about to become physically torturous, but at least you’re a human being.

I’m one step closer to my brown Golani Brigade beret, the culmination of the training done on base (basic-advanced). Three more months. Halfway.

Did I mention that I received the “shining example of the platoon” award? I can’t show you the certificate because it is ‘secret,’ considering it has certain names on it. But man... I’m doing it. That’s what I say. I’m doing it. I just hope I can write some of it.

-Stay tuned for some pics from our final day of tironut, which we spent in Jerusalem.
-(As of this publishing, I'm finished with a much needed 10 day break and made my way back to base tonight.)

Way to go, keep up the good work!

I believe "kav" is literally guarding the nation's borders and taking part in the routine operations in the West Bank.

danny, כמובן we are all super proud of you... but i hope you are kidding about decreasing your blog posts- what i am i going to do at work without them??!! anyway now that you have your cool new toy it shouldnt be a problem to write...

Yea Bro I agree with Marissa. Love you Bro

Hey Marissa is right, we need something intersting and cool to read at work. Keep writing!

Hi!! My dad is good friends with your dad and sent me the website to your blog through my e-mail at school. I'm an anthropology major and loved reading your blog! Congratulations on movin' on up! Keep up the hard work!

Humph. When I did basic back in '77 it was considered basic for the full six months, with the distance and punishments and all. Golani must be getting soft.

US Army basic was tough, but you may be overestimating how tough. Same ridiculous discipline I read in your posts is what I saw in the US Army. One thing that does surprise me, though, is how dirty those weapons are in the picture you're showing. That would definitely get someone smoked (read pushups) in the US Army. Also, the personal appearance of some of those soldiers (not shaven) is surprising; although I know there are more lax personal appearance standards in the IDF for religious reasons vs. the US Army or USMC.

I'm sure basic is tough for anyone in any army. Basic is a joke once you get to advanced training, however. But, this blog was live, so it was how I saw it at the time.

There aren't lax shaving standards. Those guys either have medical or religious exemptions, and the only way to get either is by permission from a professional in either field (skin doctor or rabbi).

Their guns are dirty because we just finished a week in the field and an all-night march and then had the ceremony a few hours later. If a gun isn't clean during a check, you get your weekend pass taken away.

I was in golani from 96 to 99 U sound like an American punk butch to me. But I'm just a Moroccan from the streets. I'm not so sure you even really completed basic training or you to see the value in everything they do

Because the American army trains ridiculous for stuff that'll never help you with war. D IDF trains strictly for war in full combat gear all the time. Except a quick 45 minutes in the morning
Israel still has the best kill ratio when it comes to tanks and airplanes and boots on the ground
We defeated six Arabic countries in six days the American army still there fucking around
And we have pulled off the greatest commando rates in history which usually one America tries to do there helicopters crash

Sorry to have offended you. It's just a blog, bud.