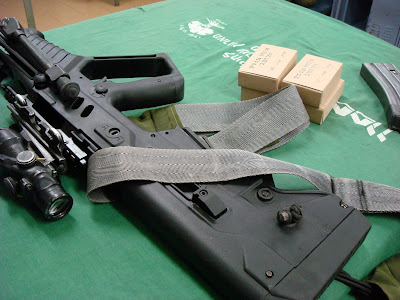 I hope that picture doesn't scare anyone, or give the impression that I'm some fanatical gun loving freak. What you're looking at is my Tavor-21 rifle with a nice little addition to it. Instead of the standard (amazingly) red-dot scope with laser, the sights that everyone gets on their duty rifle, I now have a Trijicon ACOG scope. In short, I've got a better sighting system on my gun so I can see farther (further?).

What does all this gunspeak mean, you are asking. What's the big deal? Why is this a post? Well, a few weeks ago now we had our "shavua klia," or shooting week. All we did from sunup to sundown was shoot. We shot from all different distances and in different positions. After a full week of this we had a test to see who was the best of the group. Those that scored the highest on the test were to be selected as the platoon sharpshooters. In fact, the platoon and each squad has role assignments, like the grenade launcher, light machine gun, heavy machine gun, and so on, but the sharpshooter assignment is the only one that is selected through a test.

Because of the selectivity, being a sharpshooter is probably, maybe definitely, the most desired role. I, like everyone else, was aching to be selected, just wishing for the Trijicon zoomed scope. When the time for the test came I stood waiting for the word to begin, breathing deeply and slowly to steady myself. I relaxed my arms and hands, hoping to ease any shaking from adrenaline. Like a trained athlete I visualized the bullet flying from my barrel in a straight line into the center of the target. I was ready...

As you can see above, I succeeded. Maybe it's not fair, but I wrote back in November about my shooting experience. Go ahead and give this a read if you haven't before, at least if you want to catch up with my story. Anyway, I was so relieved when the commander called out our role assignments and I wasn't given the light machine gun, the Negev. 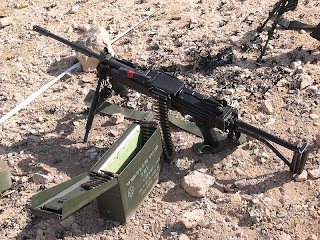 Honestly, and don't tell my commanders this, but half the reason I wanted to be a sharpshooter was because I didn't want something really heavy or cumbersome like the Negev or the M203 grenade launcher:

As sweet as the grenade launcher is, it just ruins the compact size of the Tavor. How can you take a sharp corner inside a house with that thing? How do you crawl on the ground with it sticking way out there ahead of you? No thanks. Secondly, being a sharpshooter has the obvious advantage that you can see further distances. Though it's still a few months off, when I was preparing for the sharpshooter test I told myself that when I'm in a combat situation I'm really going to want to be able to see what's happening 300 meters away, or whatever the distance may be. I have a feeling that when you're standing in an elevated guard tower, it's nice to just raise your gun and zero in on something suspicious far away.

Anyway, I'm getting ahead of myself. It's just exciting to have a bipod and special sights on my gun, special ammo, and the best role assignment. Oh, did I mention the $30,000 night vision scope we slap on there when the sun goes down?

I'm not saying yes or no, for obvious reasons, but maybe I happen
to have the same night vision scope they put on the greatest sniper
rifle known to man, the Barrett .50 cal
at 8:30 PM

Does this mean that a designated light-machine gunner has to carry his negev around with him when he's on leave etc.?

No way! Could you imagine?

Haha yeah that would be a nightmare! And not very attractive either haha.

Nice! Very nice!! Got the assignment you wanted, congratulations. Does the different assignments have specific training? I mean, it makes sense, doesn't it?
Anyway, good for you!

ACOG redpoint, Jon. Tritium, not iridium. It's pretty sweet. It's a red dot inside that illuminates with any light, but we pretty much cover it up with electrical tape all the time because it makes the dot (which is black of course without the red light) smaller.

Rafael - I realize now rereading this post that I didn't really talk about what the assignment actually means. Yes, the assignment has different training. I realize I didn't talk about the training at all! We did another week of shavua klia, shooting week, just the sharpshooters from the entire company together. We shot even more rounds than we shot in the general shooting week. Tons. We shot in all different positions, like behind benches and tables, ducking and popping up, shooting, ducking and popping up, shooting. We shot in a sitting position. We shot at moving targets (which I wanted to make into a post because you stand downfield in a trench with a target on a stick and run back and forth while the guys are shooting, taking turns obviously. It's pretty nuts to be shot at!). It's cool. And then the assignment in the field is different in that you are the sharpshooter, so you have a certain position in field movements, etc. And because I'm the "chod," or the #1 shooter for the platoon, I'm at the very very very front, even past the commander. Anyway...

I see, some of your training is going to be different. I guess other assignments must be as well. Anyway you can make it a whole new post out of it someday, you must have a lot to tell about the training and the specifics of your assignment. Looking forward. Keep up the good work.

Did you practice shooting with mud all over your pants?

and i believe the word is farther.... though it is very confusing

congrats Dan! from an entirely family perspective, good to know you'll be insulated from the worst of the worst by at least the aforementioned few hundred meters.