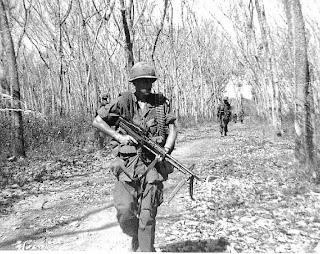 We received our guns a few Mondays ago. I know it sounds all cool and what not, and every new soldier wants to get his gun and get on with soldiering, but I can tell you from just a short experience that having a big M16 to carry with you at all times is more of a bane than anything. And mind you, I've owned and shot guns my entire life, including the M16 (AR-15), which I've owned since I was 17. There's a big difference between army life and a civilian sportsman hobby.

So, we received our guns on the 27th, which had been a very rainy week. We had to sign a sheet or two, acknowledging our responsibility over the weapon, and then we were taken to learn how to perform a safety check. To be honest, I don't trust half the guys here with their guns, so I was just trying to stay out of everyone's way. Thankfully they hadn't trusted ammunition to us yet.

After the safety check we were sent to our dorm to get our combat vests, jackets, and sleeping blankets. Under the sparking clouds we ran to the rooms, struggled to throw on the awkward backpack/vests from the mid 90's, vests that were once used in real combat in scary places but now relegated to training courses, and finally ran out to our formation. Guns banging painfully against backs, hips, any sensitive area really - the guys just didn't know how to hold the things.

We set out on a hike to the shooting range, a drizzle coating our puffy olive jackets. The company was divided into two lines on either side of the road, commanders in front, back, and walking along the space between the two rows. The clouds grew thicker and thicker, the lightening and thunder rocked the sky, and the rain came harder and harder with each step.

I looked round to see our commander talk to his superior, who was on the phone with presumably his superior, and then we were ordered to stop. The commanders disappeared. The rain was coming in buckets by now. I looked round and saw the fresh recruits pulling their collars up, heads hunched down, guns resting awkwardly around their necks. We were hunkering down to a miserable day.

The commanders reappeared from the back of the line, looking not quite sure of the day's plans anymore, but nonetheless we continued. The dirt road soon turned to mud, chunky red clay that splashed against the inside of our legs and matted against the bottom of our boots and made wings of dirt on the sides. But we trudged on.

Our two single file lines continued. My head was lowered to guard against the penetrating rain and wind. I looked up to investigate my surroundings, and at that point the strangest and most preposterous feeling of deja vu engulfed me. The rain was coming in big, fat beads. It beat against our army greens. It plopped off our bucket hats. It came from the side. It came from the ground. It came from all directions.

Our long M16s bounced against our chests and stomachs. We were on patrol, two single file lines on opposite sides of a road. Walking in silence. Walking through a forest. Cows and farmland to our left. Trees and mountains to our right. The radio man up ahead with the commander, following close by.

We were in Vietnam. We were trudging through the soaking fat rain to attack a Viet Cong outpost deep in the Mekong Delta. We were tracking Charlie.

Though I smiled at the silly Vietnam deja vu, I was not a happy camper in the rain. I felt like a real soldier, though we got rained out and were not able to shoot our guns. Only half the group got to, and of course mine did not. So, there we sat in a miserable hut, miserably soaking wet, wind whipping against our shivering bodies. I felt tough, I felt really cool walking in the rain like a real man, but in all honesty I knew how green I was. I hadn't even shot my gun yet. I had an empty magazine. And when would we finally shoot the thing?

The quote of the day? "I just need some gummy worms." It's funny what people think of when they're miserably soaking wet from head to toe with a useless piece of metal weighing them down.
at 12:17 AM

Reading your blog is one of my biggest treats.