Since I've had this past Shabbat off, and I'm back in Jerusalem around my friends, everyone has asked me what the most difficult part of the army has been. Is it the running? Is it the pushups? Is it the Hebrew? Is it the punishment? Is it being treated like property, less than human, less than your own man? Is it the yelling? Is it the fear of combat, the threat of what an army entails? What sucks the most about being a soldier in the Israeli Army?

I don't know how it is in other armies, and I suspect during basic training/boot camp it is very similar worldwide, but for me, an independent, mature (kind of), self-motivated young man, the by and far hardest bit is the lack of free time. You have just about zero time to do what you want, and quite literally zero time to yourself.

I guess you could say that your free time is when you're in the toilet, but that would be a stretch considering there are 50 guys using 2 of them. Literally. I mean, even in the shower you are not alone, and moreover there is always a line waiting for you to finish. Nothing is ever at your own pace. You are never physically alone, except from when you lock the door to the toilet - and of course that's no bubble either, nor is it a place to wile away the hours.

No, there is almost no free time in the army. But, we do get what is called TASH (ת''ש), which is yet another acronym. The full Hebrew is תנאי שרות, meaning "conditions of service." These conditions are that they have to give you some time at the end of the night before you go to bed to take care of various niceties. You shave, shower, brush your boots, organize your bag, clean your room, et cetera.

That is a lot to handle in about an hour, an hour and a half at most. Remember, you're not just doing these things in the confines and efficient space of your house. You are doing this in a tiny room with 10 other guys, waiting on 5 shower stalls, 2 toilets, and 5 sinks along with 50 other guys doing the same thing. Add to that the massive amount of gear we each have, keeping our gun with us at all times, and the need to keep everything compartmentalized and organized so we can avoid the "FIVE MINUTES OUT FRONT IN UNIFORM, SHAVED, BOOTS POLISHED, OR YOU'RE RUNNING ALL NIGHT" threat, well, there never seems to be enough time. 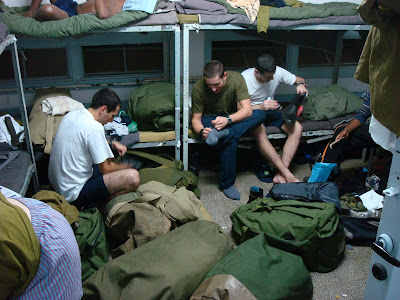 Can you imagine what the bathroom floor must be like? Well, here is an idea - and this is relatively clean. 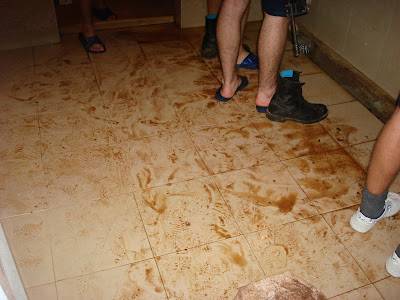 Tash, I believe, in the context of the hour before sleep, is actually terem shayna - pre-sleep time. Tash, in the Mashakit Tash usage, is as you have translated it.