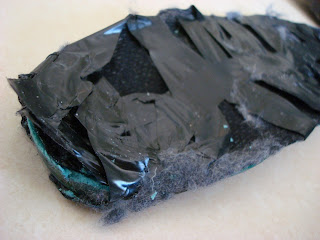 When I first stepped into the Brill army boots I was pretty happy. I thought they were very comfortable. The padding was fairly thick, the shoe grips your foot, and it just feels like a solid shoe. After a couple weeks, however, I realized that my obscenely flat feet were not going to be happy. I couldn't figure it out at first, but my right shoe was falling apart. The inside was covered in some strange blue gunk, a sticky foam material that was all over my socks.

After a couple days when I finally got home and had time to look at it more closely I realized that it was the actual pad that fell apart. It was just the right shoe. So I put on the other pair of boots, hoping that it was a defective pad. Unfortunately for me, that is not the case. The pads are just being ripped apart by my flat feet, which makes no sense to me because I naturally step downwards instead of an arched person's foot rolling and pulling the inside of the pad, but that's the way it is.

So, I had a moment of genius on Shabbat. Like an epiphany it dawned on me that I could just put the pad from my very comfortable running shoes into the boot, right overtop the original pad, which I had taped up. Genius.

It's amazing how terribly your mind works when you get up at or before 5am every morning. Oh, and people are still asking me what size shoe I wear. My commander has taken about 5 pictures of my boots, including one of his foot next to mine. Here's my shoe next to a regular sized paper towel roll so you can get some feel for just how large my foot is (15 in America). 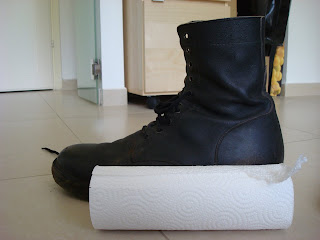 You can get orthopidic pads that the army will pay for (or most). Ask to go to an army doctor and say your feet or leggs hurt and you need shoe pads.
They are usually happy to help you if they feel you genuinly need help and are not looking to get out of doing something.
It may take a while but it may be worth it.
In the meantime you can get removeable shoepads at Superpharm. That will keep your boots from falling appart and will also absorb bactiria and odor.

That is large. My husband wears a men's size 71/2 shoe; or maybe it's 7!
Continued hatzlachah with your training.

I just got a new pair of Brill size 46 from the Afsanaoot.
What a cheap pair of boots to give a major army like the IDF.Gotta be made in PRC.No give.No water proofing ( tounge sewen up to the top).No hugging to prevent twisting.A real failiure.But they've plent of $'s for new ISUZU's and GMC's.

Since 2001, Brill has been manufacturing a new military combat boot for the IDF.
The new combat boot is the most technologically advanced model in the world, combining two types of rubber with differing densities.
The process of creating the no.1 combat boot for one of the best and most experienced military forces in the world involved various elite combat troops, numerous lab tests and field experiments which tested human physiology and foot structure to insure a perfect fit and comfort.
The extent of Brill's sales to the army stood last year on about 30 million NIS.

Recently (May 2007) Brill signed a letter of intent with a Chinese company in a joint venture to establish a mutual plant in China with an investment of 10MIL Euro.
The Chinese plant will be manufacturing military combat boots.
The establishment of the new plant will be in addition to the lines of production which already exists in Brill and will not create cutbacks or dismissing Brills employees in Israel.
Brill plans to expand in this area and march armies into the future.

yea, i have a size 14 (47-48) and i just switched my old red boots for a new pair of Brill recently on miluim...
i also have flatfeet, and the blue gunk is abound!!
i put in midrasim (really old, from sadir 7 years ago..) and its a bit better but if you ask me, the older "Alba" boots with the horizontal toe-cap were the BEST shoes ive ever owned...
too bad i had to turn them in bec they just fell apart on my last targad ^_^
-Lochem

Lochem - Thanks for the post. Every pair of Brills I had had the inserts fall apart literally within 2 hours. I ended up getting midrasim that really solved the problem. I didn't mind those boots, even though they were heavy as all hell. The Alba ones, by the time I was in the army, were strictly used by jobnikim. I guess they were the last group to get them.

I own size 15.5-16 Red army boots, Paratrooper after all lol, The blue gunk followed me, How unfortunate.. I had to peel it off of my socks at times, It sucks when you're 6'5" and the only socks that you are able to pull above the boots got blue gunk'd.

Nonetheless, I know how you feel about the people taking pictures of your boots, I had those moments and still do, Even some officers and Nagadim(Master Sergeants and above) took pics of them, it got to a point that people didn't talk to me because I'm awfully cute and adorable, and only because I am tall and own a pair of kayaks, So much for my self esteem haha.