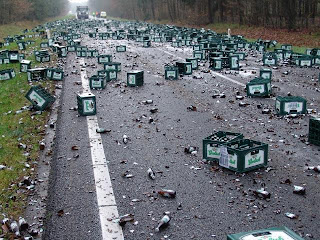 This has absolutely NOTHING to do with me or with Israel, but I figured I'd share it. What a great world...

"An Australian driver who secured a carton of beer in his car with a seat belt but left a 5-year-old child unrestrained was fined 750 Australian dollars ($710; €460), police said Tuesday.

Constable Wayne Burnett said he was "shocked and appalled" when he pulled over the unregistered car on Friday in the central Australian town of Alice Springs.

The 30-can carton was strapped in between the two adults sitting in the back seat of the car. The child was also in back, on the vehicle's floor.

"The child was sitting in the lump in the center, unrestrained," Burnett told reporters Tuesday.

"I haven't ever seen something like this before," he said. "This is the first time that the beer has taken priority over a child."

Actually, now that I think of it, this does have something to do with me in Israel. I tell my friends all the time that I miss cases of beer. The biggest package of beer you can get here, like in the supermarket, as far as I've seen, is a six-pack. A six-pack? How many six-packs do you need to throw a party...

Drink arak - not vodka.
I mean, a bottle for twenty shek!
Of course, not every brand tastes good. I'd recommend Askelon...

I distinctly remember having a plastic cup at a seuda while in yeshiva, a bottle of arak was present, and I took a shot of it from that cup. I poured some water in there, downed that to get out the smell and taste, and then tried to continue using the cup.

5 cups of Pepsi Max later, the thing still reeked. I was high on arak fumes for a week.