A Bulldozer On A Small Street 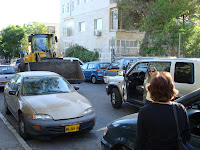 I wonder what the driver of this bulldozer was thinking when he woke up this morning. "Yes, yes, I will drive a bulldozer against traffic on a side-street today. I will do this at eight in the morning. I will do this on a street with a large elementary school, that way I'll catch all the people dropping their kids off. Yes, yes, I will get them..."

Honestly, sometimes I just love this country. I wake up pretty early for me, get to school by eight every morning, five days a week, and then begin my day just trying to fight through the normal early morning reticence. Sometimes that can be harder than the Hebrew I'm working on, which is saying something.

So, when the first thing I see before walking into Ulpan Etzion, my Hebrew immersion school, is a giant bulldozer blocking a whole line of soccer moms and their kids, well, it really starts the day off right! I watched this scene for about five minutes. The guy just sat there in his not-so-luxury Volvo, staring out of that giant glass window. That's got to be the safest Volvo this street has ever seen.

The dozer just sat there, waiting. The woman in the car directly in front of him, as you can see, finally got out of her car. The woman in the car behind her got out, looked at the line of cars backed up behind them, and just threw her hands up. Exasperated. A pedestrian went over to the driver and they chatted it up, actually just laughing at the ridiculousness of the situation.

Mind you, I would have expected Israelis to be screaming, yelling, throwing menacing hand gestures, or in the least giving the evil eye. Instead, everyone was quite civil. Not normal in this country, it seems, when it comes to drivers.

Maybe we should have more female drivers? Or maybe more bulldozers on the streets, going the wrong way. You have to laugh when this world throws you purple lemons.

The craziest thing is that I don't even know of a construction site in the direction this guy was headed, and I've walked the area...
at 8:00 AM

dude that first mom is hot!!

hopefully, that was not THE bulldozer driver of today.

Oh, geez, that'd be something. Thank goodness I know it wasn't the same guy...but that's a thought.