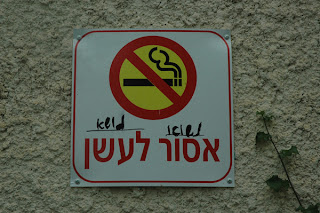 Anyone that lives in Israel knows the smoking habits of Israelis. They love to smoke those cigarettes, just puffing away at their lives. No offense to any smokers out there, of course -- you support the Virginia economy quite well, quite well indeed. Israelis just seem to pick up on anything that Europeans do, anything that looks classy or elegant. Smoking used to be a thing of beauty, a slow drag on a fag, if you will. Now, it's just an obnoxious, smelly habit, that the world over is slowly banning in one way or another. Israelis are clinging to the classic image, unfortunately, inspired by too many movies.

Long ago, an age minimum for smoking was unheard of. Now, it's big news all over Europe that France instituted a no-smoking indoors law. Some streets in Tokyo are, believe it or not, smoke-free. That means you cannot smoke on the street. Can't smoke inside, can't smoke outside; gotta find a 'smoking lounge.' I'm not sure if I agree with that one, kinda like a no-spitting on the sidewalk law, but I'm no politician.

Israelis, as I said, take European fashions and trends, cues from movies rarely seen in America, clothes unsellable stateside; Israelis take these fashions and blow them way out of proportion. I do not know if Israelis go overboard with European trends in order to be noticed, or if their insane outlandish personalities just happen to think megaoversized sunglasses are actually cool...I don't know, but they have also taken smoking and gone way overboard. For instance, it's illegal to smoke inside malls in Israel. Pretty standard law in America, as well, as far as I know. Israelis, however, will light up inside the mall, walk past indifferent security guards, and not even think twice about the "NO SMOKING" sign. They just don't care.

Somehow, the government quite recently passed a ban on indoor smoking. That means that all across the country, north to south, it is illegal to smoke in any facility. All restaurants and even bars are now off-limits to smokers. The government is supposedly going to try to enforce this law, though I'm not sure how well it'll be received. A lot of people smoke. I've even seen a considerable number of soldiers in elite units smoking; guys that have to run around pretty damn often. And no smoking in bars? With the chutzpah of these people? Good luck.

So, one of the ways they are going to try to enforce the law is by targeting businesses that "facilitate smoking." Ash trays, for instance, carry a fine of 1,290 Shekelim: If a bar or restaurant has one out, that's 1,290 Shmeks. Each. Yeah! Each ash tray is a $320 fine. And how much is the fine for the smoker who is caught? 1,000 Shmeks ($250). It's going to be weird to see a European-minded Israeli sitting in his coffee-house, legs crossed, cell-phone displayed on the table, sipping a cappachino, chatting with an old friend -- sans cigarette. If they thought it looked French to smoke and drink strong coffee with their legs crossed, I'm estatic to see this luxury stripped. I don't even care about second-hand smoke. Smoke doesn't bother me a bit, not one single bit. I just can't stand Euroimitators!

I wonder how the law will catch on, considering I was at a bar three days ago and my friend asked if he could smoke, was given an unfaltering nod, and proceeded to chain-smoke four cigs. Actually, maybe it will catch on: There wasn't an ash tray in the whole damn place.