Last week, the weather people were predicting some snow. Despite the recommendation of stocking up on bread and milk, the thermometer stayed in the 40s, and all we got was a light drizzle. So, when we were warned of snowfall for last night and this morning, I was naturally skeptical. It does snow around here, and the elevation of Jerusalem is about 2,500 feet, but...

Well, it snowed over night and early this morning. Without knowing that, I woke up feeling even more unwilling than usual to get out of bed with the customary 7am alarm, and instantly realized I wasn't going to be able to get out of bed. Only then did I take a look out the window, seeing that there were actually snowflakes coming down. My first Israel snow! The strange thing, however, was that the snow was falling like rain. They were clearly flakes, but they were coming down so quickly!

"A heavy snowfall blanketed Jerusalem and the surrounding areas Tuesday night and was continuing to fall Wednesday morning. As expected, the Jerusalem municipality decided to cancel school in the capital for the day due to the slippery streets. University classes were also canceled, as well as kindergartens and preschools."

That, and the rest of the following quotes, are from a Jerusalem Post article. This gets funny.

And apparently, it must be severe, because "100 snow plows were deployed around the city and were clearing the roads." Man, must really be snowing hard, eh?

Must really be chilly to have all this snow, right? "The forecaster said that with strong winds, the temperature in the capital could plummet to as low as -9º C." Wow, -9 Celsius? Burr! So, the wind chill could make the temperature a bone freezing, gasp, 15 degrees Fahrenheit! That's pretty cold, but not in terms of wind chill. When the Green Bay Packer's played the New York Giants for the NFC championship this year, in Green Bay, the wind chill was negative 23 degrees. That, my friends, deserves a new's report.

How on earth are they going to deal with such freezing weather? "[The ambulance service] has also reissued protocols for treating victims of hypothermia, and paramedics have been outfitted with warm gloves and special suits." And a sixth of our population is from Russia...

People drive like madmen here, especially the cops. As opposed to American cops, who tend to drive especially within the law, Israeli cops take advantage of their immunity. How often have you been slowed down on the interstate because a cop was also on the road, driving with the traffic? Should we pass him? He is going 65 on a 65. Well, the cops here are insane drivers, whipping around turns and gunning their Subaru's to the max. Not surprisingly, then, "A 17-year-old girl was lightly injured when a police car flipped over on Jerusalem's Golda Meier Boulevard due to the blizzard." My emphasis.

I hope the girl is ok. That sounds pretty serious, for a car to flip. I can 100% guarantee you the cop was driving recklessly, especially for a -– blizzard. Blizzard! That's serious! Must be, like, a few feet or something. Terrible winds, too! A blizzard is actually a defined term, or at least has definitions by individual countrys' weather services. Canada's definition requires constant 25mp/h winds and a wind chill of less than -13 degrees Fahrenheit. America requires constant 35mp/h winds and visibility limited to a quarter of a mile.

Most blizzards have a couple feet of snow. The Great Blizzard of 1888 had snowdrifts of up to 50 feet! I personally remember, with great affection, the North American Blizzard of 1996. That was the absolute greatest winter of my life. I am from Elkton, Virginia, which is right next to the Shenandoah National Park. The SNP was recorded as getting 47 inches, and Elkton got just as much. My dog and I, I remember vividly, went jumping through the snow, because neither of us could walk properly. She would jump, reappear a second later, bounding forward, while I almost crawled on the top of the 4 feet of white stuff. That was a blizzard!

So, one of the most respected newspapers in Israel reported a blizzard, at least inadvertently. Must be quite a bit of snow! How much, precisely, do you ask? "About 10 cm. is expected to accumulate in Jerusalem by the end of Wednesday and another 10 by late Thursday."

Wait. Aren't centimeters smaller than inches? Isn't that about, um, let me estimate... 4 inches? Wait, 4 inches of snow is a blizzard? Oh, hold on, plus another 10 centimeters – Oh. An 8 inch blizzard?

Humph. It's been raining since 8am. The weather is really miserable. There is literally so much rain on our front walkway that a river came in under our door, before we noticed. Miserable. It's funny that they were so worried about snow. I'm worried we're going to have floods! Take a look at this picture. I took this from my window, of our back yard, around 7:45am. This is our blizzard conditions... 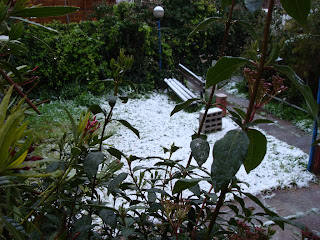 man. you could probably take all the snow in Israel from that and put it in one of our back yards from home. and it still wouldn't be as much as we had in '96.