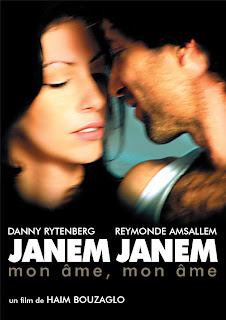 Yesterday I was walking home from class when I saw something quite interesting. As I was walking down the street I saw a cop van and a cop car parked next to a house that is being built. The construction on the house looks just about finished, with just the final touches needed. The walls are up, the Jerusalem stone has been applied, and all it was lacking externally was windows. For some reason, without seeing anything but the police presence, I knew right away what was going on.

Israel is known as a country of refuge, believe it or not. In this area of the world, including the Asian continent we supposedly live on, the Jewish state is looked to as a place to go to rise up in the world, or to be rescued from danger. That's why I see it as America, fifty years ago, where people from around the world would dream of going to to get Westernized. Israel has the best universities outside of Europe and America, rivaling both of those areas as well. We have one of the best medical programs. Our trading centers are also top notch, such as in diamonds (surprise surprise). And we have human rights; no wonder the Sudanese and Ethiopians trekked here from hundreds of miles away.

Not without reason, then, do many people from poor Eastern European countries and southeast Asian nations try to get into Israel to live, work, or study. You wouldn't imagine how many Filipino, Vietnamese, and Indonesians are here working as geriatric nurses. As a matter of fact, my flatmate's friend talked to me yesterday about a Korean family that she just interviewed to rent her grandfather's apartment for the year. The man is getting a degree from a college here in Jerusalem.

And, as this country is continually under construction, of course the labor is going to be international. Not only Arabs are the construction crew, however. As the movie Janem, Janem expertly reveals, people from Romania and Turkey find their way to Israel. Tons of Southeast Asians, again. People from all over want to get in to help build the country -- in 2008 for money as in 1895 for ideals. Human ambition never changes, only the circumstances. There are so many anecdotal stories about people in ravaged countries who work in factories only to be paid with the products that they create or work on. As I read once, some Russian coffin makers are actually compensated with, of all things, coffins. At least in Israel they'll get some cash.

So, as I was walking down the street, there was a construction site, and police cars. And there, just like in the aforementioned movie (which you should definitely find), were Eastern European looking men being led into the police van. As far as I know, the way it works is the cops know what is being worked on, and they just do random visa checks. They show up, ask for your passport, check the details, and if there's a problem they take you in...and then deport. I wonder if those men I saw yesterday are back in Lithuania?
at 1:57 PM