A very good friend of mine was invited last Wednesday on a trip to Israel, for free, on the following Sunday. He applied to work for a political action committee (PAC), a lobby on Capitol Hill, and they hired him over the phone. Truth be told, he had no idea what he was hired to do, what exactly his role was, or what they expected from him. They just said, "Come to Israel for 8 days, for free, and get the real inside scoop on the government." This organization, which I will not directly name, is the second most powerful lobby in America. Let's just say this: If you hate the corruption on Capitol Hill, you'll name this group. If you hate Israel, you'll name them. Those that say 'Jews control everything,' cite this PAC first.

So, my buddy goes on the trip, only to find out that he absolutely hates it all. All the kids are pompous, egotistical, selfish brats; their only goal is to be wielders of supreme power. One kid started every new statement with the declaration, "When I'm a Congressman..." Who does that? Naturally, I asked if the other kids all rolled their eyes. He responded, "Nope. They all thought, 'Well, that's fine, but...When I'm a Senator.'" Half of them want to be Congressmen. The other half want to be Congresswomen.

The point of this post is about the last governmental trip they made. This organization, considering its influence, is able to get insider access to things that normally are off-limits to Israeli government workers themselves. For example, they toured one of the Israeli rocket companies factory. They sat in the 'head of state' section during a live parliament session. The prime minister's spokesman had a private meeting with them. And so on.

The last trip that they made was to the police's headquarters here in Jerusalem. First, they had to be individually screened just to be let inside the premises. This is fairly normal for Israel, to have your bag checked or to go through a metal detector, but they were screened, if you catch my drift. Next, to go into a more sensitive area, their faces were biometrically scanned. They had to step up to a computer monitor on the wall, stand close to it, and stand still as the sensors made a digital map of their face. Finally, they found themselves in the anti-terrorism nerve-center operated by highly trained computer techs and the number one anti-terrorism force in the world.

They were led into a large room, like something you'd see in a movie about impending nuclear war, with monitors all over the walls, men and women in uniform, and strange codewords floating through the air. The guide showed them a wall of security feeds, each showing different areas of Jerusalem. A technician is able to move the position of the camera, in real time, with a pure high definition feed not skipping a beat. From the downtown district to the Western Wall in the Old City, these cameras have a tighter lock on Jerusalem than Webster does on the dictionary. The camera quality is so good that the technician directed the to a live feed, moved the camera on its pivot, and proceeded to zoom in all the way onto a rabbis prayer book, displaying the letters on the page as vividly as if you were reading it yourself. 100% true story.

After sufficiently blowing their minds, the guide led them to a conference room, where the group had an interview with a New York City anti-terrorism bigwig. This guy is in Jerusalem for a few months, in order to learn from the police how to fight terrorism. The NYC officer informed the group that he's been in law enforcement for thirty years, and he thought he knew everything, but in the couple months he's been around Israel, he feels like he is a new-born rookie. Jerusalem stops dozens of planned terrorist attacks each month, week, and sometimes each day. They are constantly on the move. I personally have witnessed a dozen packages and abandoned suitcases being torn apart by remote controlled robots, being charged with electricity, and even shot by the robot himself. Once, it was a real bomb, but they caught it just in the nick of time. If anyone has experience with terrorism, it is Jerusalem.

NYC is getting its anti-terror tactics from real pros: The Jerusalem Municipal Underpaid Overworked Police Force. So don't worry about me over here, we're protecting you, New York. 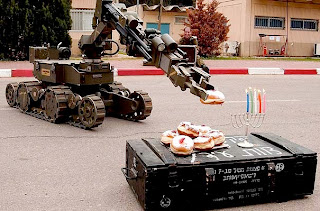 Honestly, how can you look at that picture and not understand why a young Jewish person wouldn't want to be here?

Gotta love the AIPAC Advanced Advocacy Misson... Unfortunately your friend sounds a tad cynical to me and probably missed out on getting as much out of the trip as he could because he had preconceived notions on what he thought the other people on the trip would be like. Not that many people were all that interested in becoming a Congressman, Senator or whatnot.. just a few tools that were outspoken.

Normally I would agree with you, in that you want to take some of the generalization out of this post, but you're unfortunately wrong.

My friend was told about the trip on a Wednesday, and left for it on Sunday. Even if he wanted to he didn't have time to conceive notions. Despite even that, this guy was so excited for the trip. He has wanted to work for this organization for a very long time. He's one of the smartest people I've ever met, and he knows what the pac is all about -- intimately.

But, once he was on the trip, he was stunned with the people. There were 50 people or so, and the only way I exagerrate is by saying that all 50 want to be some politician. I should say 40 out of the 50. I'm not kidding you on this.

I met them. Twice.

Unfortunately, tools are the people that are good at politics, because they never have that thought that normal people have. Namely, they never think, "Maybe there is someone out there that knows more than me, or could do this better." That's a tool, someone that has a false self-image and shows it or tries to show it by emulating a persona they want to have. That's what these kids were. My definition of tools.

But whatever, maybe you had a much better experience on the trip (if you went). Or, maybe you're a tool? I'm not saying you are, I don't know you!

Just my thoughts on my blog.