September 4th, today as of this writing, is the one year anniversary of my move to Israel.  It seems like yesterday that I moved here, and strangely enough the past six months went faster than the first six months.  What's even stranger is that I came to Israel when I was 22, and very soon I will be 24.  So, it feels like two years have passed!
One whole year has passed, so where do I stand?  Let's see...  Not much money in the bank (read none).  I don't have a girlfriend.  My Hebrew is mediocre at best.  I'm kinda in shape, but unfortunately I can't afford a gym membership.  I'm going into the army in less than two months and I haven't even finished the paperwork.  My diet sucks.  One of my running shoes has a hole in the air pocket.  And... yeah, that's probably enough kvetching.
BUT!  But, to balance out the less than perfect elements of "real life," there are tons of great aspects to my life.  I have many interesting friends from all over the world.  I live in the most spiritually enriched city in the world.  I'm a citizen of the two greatest countries and nations of the world.  When I do splurge for something other than pasta and rice, I absolutely love the food in Israel - Middle Eastern fare.  Whenever I have free time I go on the coolest little trips around ancient, ancient sites.  And, most importantly, I'm exceeding in a long held ideology.
I'm doing okay!  Besides, I look the same, right? 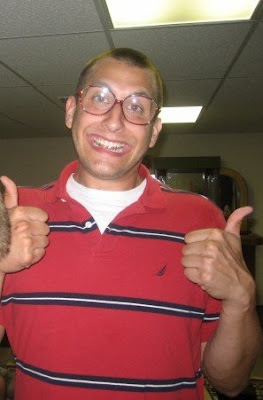 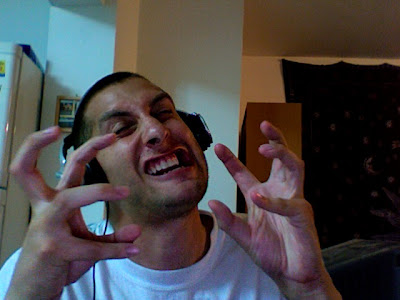 nawww dude...your room's bluer, your teeth are whiter, and you've done away with the whole wearing-something-on-top-of-your-undershirt thing.

Dude, I miss you. Those pics are hilarious. I would recommend buying that cheap-ass processed meat from Tirat Tzvi so you can fill out your protein. Good luck with your paperwork.

If you went NBN, (and not GBG, as per Benji) we were on the same flight.

Ben, miss you too buddy! I watched a History channel thing on that processed meat. It was gross. For example, they liquify the meat before reforming it into what you eat. Think about that.

Thanks all. Even you, Doug.

Yo bro, it's your bro posting anonymously here, and that first pic of you in the glasses really cracked me up. I remember that night well, we had so much fun! Miss you bro!

Hahaha - that was funny. I think your new pic looks much cooler. You're a crazy Israeli now (and it shows).
Continued הצלחה (hope your 'puter can read the Ivrit)!

The kid's a senior, Danny and we miss you. Follow your dreams!
Blazrmom

Thanks Lady-Light. I got the 'Brew. Not sure if either of those are "cool"...

in the old picture theres a fresh innocence,in the newer one slightly more dishevelled but cooler!!

(HEY, I said "cooler" first!)
Ok, how about, in the old pic, you look clueless; in the new, you look like, I can't take this crazy BIZARRO LAND it's driving me NUTS!

When I first arrived (11 years ago, and haven't been back), my diet improved drastically.

If I lived as close as you do to Mahaneh Yehudah it would be much better.

It's all about time management.

WIth the current traffic in Jerusalem it takes about an hour to get to Mehane Yehuda from my place. Even when the traffic isn't bad it takes like 30-45 minutes. I live on the total opposite side of the city!

I used to live twelve seconds from the Shuk. Or a jump out the window. (Depending on time management ;))


Danny-can you PLEASE put a space between 'least' and 'someone' in your comments header. THANK YOU.

I took that picture!!!!!! (the really dorky one. with the glasses, obviously)