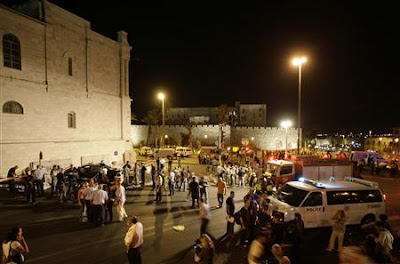 In honor of the holy Muslim month of Ramadan, an East Jerusalem Arab rammed his BMW (they turn to terror because they're poor, right?) into a group of soldiers today on a tour outside of the Old City.  The soldiers were standing at Kikar Zahal (IDF Square) when the East Jerusalemite veered off the heavy traffic road into the crowd.  I can tell you from my knowledge of that area, which is rather in depth, that the road was probably very busy and that square was populated with many tourists.
Ramadan, the month in which Muslims fast during daylight hours and engage in intense study of the Koran,  is the month that the Koran was revealed to Mohammed.  According to the Muslim Student Association at Colorado State, "a measure of ascendancy is given to one's spiritual nature, which becomes a means of coming closer to God. Ramadan is also a time of intensive worship, reading of the Qur'an, giving charity, purifying one's behavior, and doing good deeds."
What does the Koran say?  "Peace!  Until the appearance of dawn."
Really?  So, a proper Muslim is to practice peace, "purify one's behavior," and do good deeds for his fellow man - until the appearance of dawn?  As in, and correct me if I'm wrong, do not commit violence during the night?  Peace during the day not necessary, peace at night Koranically prescribed.  So, a proper Muslim would not commit attempted murder during the night, but...

"An Arab resident of east Jerusalem rammed his vehicle into a group of soldiers at a central Jerusalem thoroughfare late Monday night..."*

Final word: let's take a look at the various headlines on this attack today here in Jerusalem.

And the always trustworthy Fox "News"...


It's just funny how most of the headlines fail to mention who committed such a terrible crime, and how all of them besides JPost and Fox even go so far as to put qualifying quotations around the word attack! I mean, yes, if you want to put a quotation around "terror," fine, I understand your hesitation. But "attack"? Was this not an attack? Did a man not purposefully drive his vehicle into his enemy? Yes, it was an attack!  And moreover, CNN and MSNBC fail to mention that it was even an attack of any sort at all.

Fox "News" is good for one thing: keeping us pro-Israel people happy.  And oh yeah, I'm OK.  I was at home.  But I planned on going out to that area tomorrow for some food...