Many people comment on the Hebrew names that sound silly in English, most notably Dudu, which is pronounced exactly the way you are hoping it is (if you're 23 and dumb like me). Well, I'd like to officially add one to the list, though I think it may be Amharic (Ethiopian) and not Israeli or from Hebrew.

I have a friend who was in Sherut Leumi, the volunteer program that religious girls do as an alternative to army service at 18 years old. Her job was up north near Tiberias where she lived at a school for delinquent youths. Many of these young men (and girls too, I think) had horrible stories: orphaned, abusive parents, young criminals, expelled from other schools. So, as you can imagine, she had a tough crew.

Thank goodness one of them was called Nacho... his legal name. Proof? Here you go (the name in the middle): 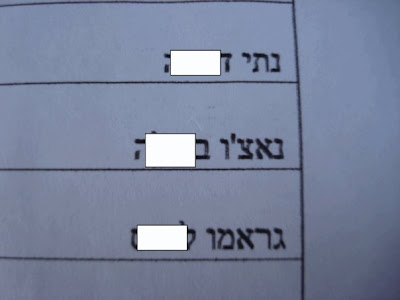 Email ThisBlogThis!Share to TwitterShare to FacebookShare to Pinterest
Labels: Hebrew

Nacho is a Spanish name. It's short for Ignacio. The kid was probably from an Argentinian family, or possibly Cuban, as those are the most common Spanish speaking communities here.

Thanks for the info, Lisha...

This guy was Ethiopian though.