To Prepare For The Worst 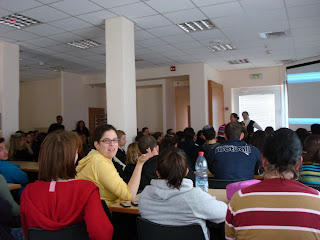 Yes, I agree with the girl in the picture: WTF? Tomorrow, Tuesday the 8th, Israel will be holding what will apparently be the largest war and terror preparation drill that it has ever undertaken. The drill is to alert us to all the various types of attacks that we have to be ready to deal with: chemical, biological, conventional, maybe even nuclear - if you can prepare for such a thing. This drill is going to be held at 10 am, which means that everyone is going to be rushing to the miklatim (bomb shelters) found in the basement of just about every single building here. Walking along the streets, if you read Hebrew, you would see hand painted signs on every corner or stone wall pointing towards the closet shelter. They usually are never more than a step away, if that. So, this drill is just to enable us to evaluate how our safety procedures would work in case of an emergency, any emergency necessitating shelters.

Politics: Our neighbor to the north, Syria, is pretty convinced that we are getting our ducks in a row for a war. They think we are readying to start a war. Considering that our defense minister recently canceled a planned trip overseas in order to tour the Syrian-Israeli border, considering our military exercises in the north, and even now because of this civilian drill, well, I don't blame them. They don't realize that Israelis wouldn't take on a war right now even for all the Google stock in the world. None other than CNN is reporting on this today, on the seeming Israeli preparations for some offensive.

As you can see from the picture taken during our school-wide discussion with a female soldier whose entire job is to detail emergency preparations, this is just a precaution. We're talking about what we should do in the case of an incoming rocket, just the same as when we had to duck in the hallways in middle school in Virginia to simulate attacks by G-d: hurricanes and tornadoes. If this was Israel's preparation to start a war, I think we'd have a little more heads up than just one 19-year-old girl and a laptop.

This is an inconvenient time because we already have so many enemy states around us saying whenever we so much as sneeze, "Look! See? Israel is bracing for war!" And then we hold this war drill, and our STUPID politicians go and run their fat mouths saying things like Benyamin Ben Eliezer's "We'll destroy Iran if it attacks us." These enemy states, like Iran and Syria, are just waiting for excuses to either bomb us directly, or for justification to continue their massive monetary and military support of terrorist groups like Hizbullah. So, what do we do for people who want justification to hurt us? Guys like Ben Eliezer give our opponents prewrapped packages that they can then take to CNN and say, "Look! See? Israel is threatening us!" I can just see my dad shaking his head right now in disgust. "Israel has the worst PR in the world, and it's their own fault." On days like today, I agree.

Reality: The sad truth is that this is an inconvenient and dangerous time to even hint at military preparations in Israel, but that is a sad political truth. The reality is that we are always, since before Israel was even declared a state, on the ready for war. Or at least we should be. We found that out in 1973 during the Yom Kippur War, on the highest Jewish holiday, that we can be attacked at any moment with no warning. Even if our civilian emergency routines provoke a war, what option do we have? What is better, to not practice life-saving techniques in the vain hope that we will stave off attacks, or to prepare and be prepared when the worst happens -- which we should by now expect?

The reality of the situation is that we have to prepare, even if the bad guys misinterpret our actions.

Ah, but relax, hope is not lost! Though Ben Eliezer has a stupid, fat mouth, he is right! Iran would not attack us, as he says, because it would mean the end of that already failed state. Syria hasn't dared touch us since 1973. I laugh quite heartily at the idea that Hizbullah thinks we would "lose" a second round of war with them. We learned a lot from 2006, which we didn't lose in the first place, and they really aren't willing to jump into it with us at this point. Think about it like this:

1) They have all the rockets and guns and manpower that they had in 2006 before the Second Israel-Lebanon War, which they consider a success.
2) They have Iran and Syria on their side.
3) They have world sympathy on their side.
4) That world support, however, isn't going to win them any concessions from us, which they know.
5) Therefore, they have no reason to not attack us if they think they could "win." They get nothing from us except that which they would take in war.
6) They surely want a victory, as that would really bring them into power in Lebanon.
7) So they realize that they must fight us to get what they want, though they haven't attacked or threatened to...
8) Conclusion: they aren't ready for war.

Aha, the truth comes out!

Honestly, 90% of this meeting with the female soldier was talking about what to do in case of a major earthquake. This region is long overdue for one, as I said in this previous post. One worry at a time, right?
at 10:28 PM

Well, if there's one thing my parents learned from the Cold War that they've taught me, it's that shoddy elementary school desks can protect you from nuclear blasts. So keep that in mind. I hope the soldier with the laptop covered this crucial point...

I've added a link to your site from my blog. I hope that's okay. (I'm sorry to say, however, that at most it'll increase your blog's traffic by like only two people.....)

Don't forget that it's just about Passover time. This is when we kidnap Arab children and use their blood for matzah!

Sam, indeed she did teach us all about how to hide underneath our desks! Apparently the edge is the strongest part! I'll remember that the next time a Russian katyusha falls through the ceiling!

Are you retarded or just naive? just wondering.

My ten-year-old came home after her first bomb drill in school a few months ago (we just moved here in September) and said, "They told us to hide under our desks--like THAT'S gonna help!"

That is a smart ten-year-old. When we did the hurricane drills when I was a young boy, well, it was pretty awesome! Though I realized that if a 'cane came through, I was toast.

I am shaking my head. Not only at the pathetic PR snafus of the Israeli government, but at the Citizen Shelly's of the World. Shallow thinkers, easily influenced by simplistic misinformation campaigns mounted by the real killers of innocent people. And Israel continues to set themselves up for the criticism. World opinion does matter, even if the World is populated by pinheads & miscreants.

I'm with you Pap.