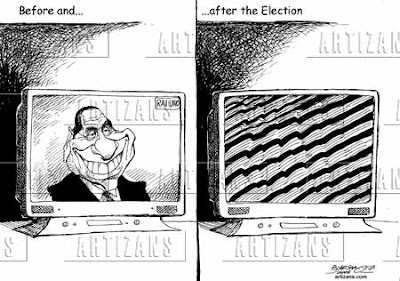 I walked into my ulpan class today, at the end of a 20 minute break, to find my fellow Hebrew-butcherers in a political discussion. I asked if they were indeed discussing politics, which they said yes, and I told them I would come back when they were finished. You see, I majored in politics, I worked in a political think-tank, I was involved in this stuff. And, I find it to be some of the most offensive, troublesome, and dreary business known to man. I enjoy international law and conflict analysis, I really do, but when it comes to the nitty gritty of people discussing this and that -- count me out. They convinced me to stay, however.

Basic stuff, you know. I helped explain to the non-Americans what was happening with these crazy primaries. Talked about the candidates, what they were saying, what everything meant, the schedule for the election, etc etc. Nothing crazy.

The whole time, however, the Italian girl that I talked about in previous posts (the, um, sensitive one), she looked like she had something to say, to me. Let me just air some grievances. First of all, she's one of those people that knows everything. Not literally that she knows everything, but she thinks she does...literally. She argues with our teacher, a native Israeli, over Hebrew. Come on. That's like Hiro from Heroes, the TV show, telling me about English verb structure.

Anyway, she goes on this rant about how America's "democracy" is such a joke. The meat of the story, what she was saying, was that politicians in America don't really represent the people, the people have no voice, that money is the only important factor in politics -- but only in America. Naturally, I said, "Oh, right, and the Italian government is a real democracy, right?"

"Yes, it is! It's funny that the whole world looks to America and talks about their 'democracy,' I mean, money is the only thing that matters in American politics!"
"Right. First of all, Italy is a democracy? Could have fooled me. Berlusconi owns all the media, owns the government, he was as corrupt as Arafat, and he's coming back!"
"Well, Berlusconi is different."
"And yet you are reelecting him."
"Well..."
"OK, and what about Italy having 61 governments in the 62 years since World War Two? How can the Italian government represent the people if it isn't even in office long enough to represent itself?"

Naturally, on her side, there was no return. That's because, my friends, America is a real democracy, and Italy is on the lower end of what anyone should consider a democracy! I mean, their most dominant political leader controls all the state media, which is oh so open, right? And, he really does use that control to censor what is said about him. That is a true blow to freedom of speech. Imagine if our president was the owner of Fox, CNN, NBC, ABC, CBS, and whatever other media outlet you could think of. You think you would ever hear about his failures, his blunders, his mistakes? I say that sounds a little bit like Iran. Or, Italy.

So, yes, America is a terrific democracy! Case in point: The intense fighting over the chance to be the Republican, or Democratic, candidate for president. Look at how big of a deal Super Tuesday was, and that's just to decide who gets to run for office, not who gets into office! Sure, money is important, but it really isn't everything. The McCain-Feingold Campaign Reform Act has done more than you could imagine to curb campaign finance questions, and though some shady deals do go down, the majority of funding only demonstrates how much constituent support a candidate has. And besides, all the candidates have millions and millions. In college I remember reading this study, for a class, about the relationship between campaign success and money. It hits a ceiling of effectiveness, just like everything does in this world. So, you can have billions, but it won't influence the outcome versus a few hundred million.

Or, maybe I'm just sick of this silly Italian girl. I'll have to write another post about how she "gave me a talking to" after class. Check in for that on Friday, or Saturday. That cartoon at the top is a perfect political cartoon. It really hits the bulls-eye on the media in Italy before and after Berlusconi came to office. Check out the poll in the upper right corner. Give it a vote!
at 10:30 PM