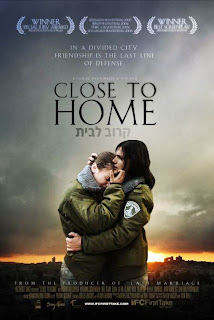 As I was walking down the street the other day, the morning after the first suicide terror attack on Israel in just over a year, I saw something that caught my eye. There was an Arab man standing by a cop car, looking like he wasn't sure what to do with himself as he played on his cellphone, and the female police officer was calling in his paperwork. If you stand at the intersection of Jaffa Street and King Solomon Street, the intersection between the Old City and the New City of Jerusalem, you are almost guaranteed half the time to see cops checking I.D.'s. My picture happens to be from a different area of the city, a rich area, thus a decent amount of construction (needing cheap labor - Arabs).

I'm not 100% sure on how it works, as I've seen dozens checked and generally all let through to the New City, but basically the cop checks the Arab person's ID, smiles, and off they go. Not quite sure what they're looking for, at least in terms of what may or may not be printed on the ID. If anyone knows, inform me.

Anyway, in this particular case the Israeli officer was calling in the man's papers, probably some working papers, as he stood on. I felt like I was breaking the law by just taking a picture from the other side of the street! But seriously, it caught my eye in a few ways.

1) It was pretty innocuous. There wasn't any abuse, the woman didn't call in multiple cars for backup, as undoubtedly they would do in America. Heck, I was pulled over once in Williamsburg for suspected drunk driving - supposedly I pulled out of a turn too quickly, and it was 2 AM - and within 3 minutes there were 3 cop cars, all lights ablaze. Even after I blew a 0.00 BAC, and reiterated that I had nothing to drink, I still felt guilty! So, I was a little proud of the female police officer here for not calling in backup. You go girl! Oh, yeah, the point: She just checked his papers, no abuse like anti-Israel voices would have you believe.

2) Do you blame us? The morning after a suicide bombing, after we have had a year of freedom from bombings (not counting the daily rocket barrages from the Gaza Strip, of course) it's pretty much a foregone conclusion that we're going to check a few ID's. You kill us, we'll check your ID. Not a bad tradeoff.

3) This reminded me of a pretty good, though maybe a little left-wing for me, Israeli movie that I saw last year. It is called Karov L'Bayit, or Close to Home. Essentially, it is the story of two very different girls that find themselves as partners during their army service. As you may know, army service is compulsory in the Holy Land. So, these two 18 year old girls have the terribly difficult duty of checking non-Israelis' IDs, on the street, and writing down their information. Targeted profiling, if you will. We speak of these things in America as potentiality. We live it every single day here. These girls have a very important, though taxing job. The story really reveals what Israelis have to go through, and from the attitude of the soldiers you see that it isn't at all what we want. What 18 year old would want to spend 2 years checking the ID's of generally innocent people - people just trying to work whatever job they can get?

So, what should you take from this? Remember: Israel does what it has to do to try to curb illegal entry into the state, and keep harmful elements from our populace, but we do it with humanity. This picture is proof that Israel is indeed humane towards the Arabs. Some commentators will even say that Israel has the most humane army on earth. I don't want to get into a political discussion, but I will profess to anyone that Israel does go out of its way to guard the "innocent until proven guilty" ideal of Democracy, even towards our non-citizen residents and workers.

This picture is huge, so you can download that and zoom in and all of it. Sorry it's not better. I wasn't trying to get arrested! 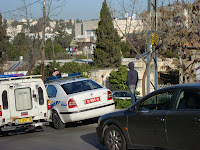 I couldn't make the picture larger. I kept getting a question mark on my screen. What were the details in the photo?

It works on my computer and my flatmate's. Anyone else having a problem with it? Just click on the picture...

I just wrote an article about a pc game that takes place in the Middle East. I can't imagine what it is like living in a place where suicide bombers frequent the streets. I hope the region can find peace someday.