Many months ago during advanced training I found myself trudging through exhaustion in one of our "war weeks." Think Hell Week, I suppose. Finally, after nearly 24 hours of non-stop drills and hiking and carrying loaded stretchers and all types of worst case scenario preparation, we were given a few hours to sleep. I plopped down in a forest with my platoon, fully geared up and ready to pass out. Helmet on head (forbidden to remove), combat vest strapped tight, gun tucked under my arm - pass out I did.

I'm not sure what happened, if anything happened at all at the moment that woke me, but I opened my eyes an hour later to a certain degree of pain. On my left shoulder, towards the back, there was a slight stinging. I pulled the shoulder straps of my vest to the side, pulled my shirt off the area as far as possible, and there on my skin was a raised, bloody bump. I just kinda looked at it for a few minutes.

"What the hell is that?"

The first thing that went through my mind was that I was stung by a bee, or even worse, a scorpion. Eventually I rubbed the bump, and there seemed to be something underneath the skin. I felt like I could move some large, straight, hard chunk of hidden something or other. Despite playing with this thing for a solid hour, missing a most important amount of sleep, I didn't see anything come out. Except blood, of course. And some pus. It was pretty gross.

It wasn't until a few days later that I realized another possibility. My hypochondriac mind reminded myself, much to my dismay, that years ago I had to have a mole removed because I ripped it and that could potentially start cancer growth (namely, melanoma). The more I thought about it, the more it seemed plausible: the shoulder straps of my vest rub that area constantly, and between all the stretchers resting on my shoulder, as well as hundreds of pounds in waterpacks and enormous backpacks full of ammo and food and gear, well, there's no reason that a mole couldn't have been traumatized.

A normal person would have seen a doctor right away. I am in an army run by Israelis, however. I'm pretty sure they don't believe in diseases here, cancer included. I knew not to even ask about some weird bump that sometimes bleeds, sometimes dries up and peels a layer of skin off. Yeah, that sounds pretty bad, right? Crap. What was I going to do? I figured I'd just wait it out...

But then, two days ago, the bump was raised again. I kinda just moved it around, and some pus came out. Gross, sorry, but bear with me. Then some blood came out. A day passed, and the thing looked terrifying! It was raised pretty high, scabbed over, and obviously had both blood and pus underneath. Honestly, I was starting to worry that maybe indeed I had something serious on my hands. What the hell would I do about it? If the doctor in the army dismissed my 101.2 degree fever by telling me to rest, no medicine included, what would they say about a bump? I know: it's a pimple. Bastards.

Well, with all that worry, I finally got home this afternoon. After taking my shirt off in order to take a shower, I glanced at the scabbed bump. I figured I'd be 15 and play with it. I peeled the scab off, and a small amount of pus oozed out. Awesome. And then, for no reason at all, I figured I'd touch around the sides. So as I barely pressed a side, out squirts a long, thin, sharp thorn. It was like Old Faithful how fast that thing flew out. It kinda even scared me to see some foreign, alien object shoot from my flesh.

Whew. We're talking about more than four months of suppressed worrying here, people! Today, I tell you, is a good day! 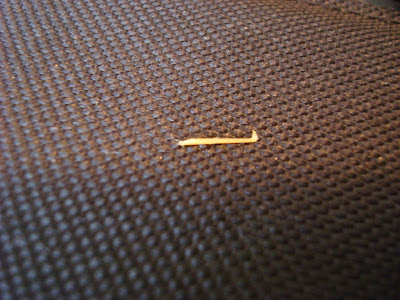 dude have been reading your posts for a period of months and felt I had to comment after this one.
understanding your busy as hell and dont expect shakespeare every week but i'm feeling your losing your interest to this blog. Please take it as positive criticism and a compliment on how great your earlier posts are. Remember you have fans reading this!!

I don't mean to scare you, but if a thorn created all of that - especially for four months - it got infected. And if there was blood, the infection could have gotten into your bloodstream...it might be worthwhile to ask a doctor about antibiotics.

You'll be fine. I felt for you.

Rule of thumb: If there is pus or other signs of infection, it is either a foreign body or a bite.

Anonymous - thank you for your criticism. If you don't like the blog, which is really just my outlet for whatever is on my mind or heart, feel free to stop reading.

ps: OMG, Danny, seriously omg. I'd be laughing if it weren't so awful.

Kirara - I bet you are actually laughing. Jerk.

just wondering, what is the general mood of israeli soldiers about the american military?

hot compresses would have hastened that 4 month ordeal

I was wondering how you'd respond to your constructive criticism writer. Good answer. Mom
Next time, don't wait 4 months if you have something wrong with you!

That "constructive critisism" guy is a shmuck to be blind to the gold you are writing.

Your a King!
Keep on Keep'en on my friend!

Pretty sure you call me a Hypochondriac

arkadiy - honestly, they think we're better soldiers, but think the americans are all huge and monster-sized (like big weightlifters). I laugh.

Anonymous - thanks! Pure gold, I agree.

Lauren - that would be my first shrek reference!

Sara - you still coming next month?

Stop being a tough guy and go to the medic. Good Grief!

Shrek references are very often very appropriate, even though it's a kids movie (not really) about an ogre and a princess.

I came across your blogs. My heart goes out to the IDF and to Israel. I long to be in Israel one day.
I hope you heal well!!

pang - thanks. Where are you from?

I am from Kansas City. =P. But my mind is on Israel all day, when I'm at work in the day.
You all are in my prayers!! I can't imagine what you all could be going through. May G-d's strength continue to help carry you through whatever situations you may face.

Isaiah 41:10
So do not fear, for I am with you; do not be dismayed, for I am your God. I will strengthen you and help you; I will uphold you with my righteous right hand.

Thanks p, but don't worry about us! We're not going anywhere, especially with scary mofo's like me guarding this place.