OPSEC Is The Name Of The Game

Taking a page from one of my favorite Iraq War bloggers, Matt Gallagher of Kaboom, I feel I have to make this post about Operational Security (OPSEC). OPSEC is defined by the U.S. Army 1st Information Operations Command as:

A process of identifying Essential Elements of Friendly Information (EEFI) and subsequently analyzing friendly actions attendant to military operations and other activities to: 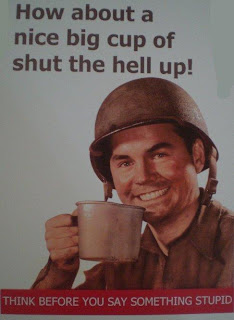 With OPSEC on my head, I plan on continuing my blog for at least the next three months. My unit has deployed to an active area, and we have already begun our operations. In all reality, as the army works, we have switched places with the unit that was here before us - so no one should think this is some new campaign or new mission or new operation. The Israeli army works really as a police force, so we're just continuing keeping the peace. That's our mission: keep the peace.

As Kaboom found useful, I too will strictly refer to this area of operations with a made up name. Though the name will be made up, and you can guess all day where this stuff is taking place (and I will never say a word on the matter), I can tell you that it is inside the West Bank. I can say that because as anyone familiar with the geography of Israel knows, it is the only place that the Israeli army operates within Arab population centers. Gaza is a closed-off area, and the northern borders, though hot, are on the other side from Hizbullah and Syria.

You want al-muqaddasah in the femenine.

And I recommend you take a placename from fiction, like Aladdin's Agrabah or Narnia's Tashbaan.

aviv - thanks for the grammar. Now I have to figure out how best to change all the occurrences in the post this week from my phone. Crap.

Oh, and I did choose a name from fiction. I made it up! what else does it refer to? (i mean, I assumed it did, but I thought that would be even better).

I think that WWII poster is pretty funny. They must have had all sorts of trouble with the young enlisted recruits back then dealing with OPSEC. Or maybe OPSEC was just starting to become a major priority in the U.S army (as operations became more critical and complex)

Call it DuLoc and that can be your second Shrek reference. However it is not remotely Arabic anything.

Call it muchen tuchen! or terroristan :P or "no country for old men" or something similar :P

call it "the land with no name"

let me guess...Chevron? Ramallah? Jenin? Jericho? a settlement? a checkpoint?

Also do u think you could post some pics up of the army or wtvr?

I know Golani were near Jenin for a while, not sure if their still there. That would be my guess.

Calling it the "Holy City" (if I have the translation right) does tend to narrow it down a bit. Or maybe it's a deflection!

Kirara - everything is a holy city around here!