My 25th Birthday In The Israeli Army

(If you don't read the post, at least check out the photo comparison at the bottom. I think it's hilarious)

It's pretty damn hard to believe that it has been exactly one year since I had my 24th birthday in the army. I was drafted four days previous, on the 22nd of October, 2008. Still nervous as hell every morning upon waking up, I kept my mouth shut when my birthday came. No one knew about it, and that was the way I wanted it. Despite that, as I said in that post from a year ago, "It was really tough spending your birthday getting yelled at."
Well, days have changed. I am a fully-rated combat soldier, and yelling is reserved for... nevermind. They still yell at us all the time! Not like in the movies, like basic training in Full Metal Jacket, but it is for when we do something wrong. And that happens all the time.
So, I guess I will also spend my day getting yelled at!
But again, as I said in 2008, "I've always wanted to be a soldier, especially for the only army in the world that I think is 100% imperative for the existence of the state it serves. So, ideologically I didn't need cake or toys or songs." The only thing I'd change about that now is that yeah, I'd like cake. And don't you worry, I will eat some cake!
Seriously though, and I know everyone says this at this age, but I am having a hard time understanding how I'm already 25. I remember quite distinctly being about 17 and thinking long and hard about what Danny Brothers of 2009, a 25-year-old man, would be like. This is the age that definitively signals adulthood. This is the age where your profession becomes your life. Where marriage and children become a reality. Where you become, I don't know... grown-up.
But I don't feel like that! Man, I feel like a kid still. I'm pretty sure I'm 18 and just started college. That ridiculously handsome, athletic, muscular body in the mirror? That's not mine, is it? Those rugged good looks on that wise, mature face? Could it really be? And the prophetic eyes staring back at me; where did they come from?
At 16 I thought about myself at 25 as being everything I wasn't at the time: confident in my beliefs, set in my ways, and self-sure. Some of those are good things, others less so. Regardless, at least those things have come with age. For that I am thankful. I don't think I am quite as emotionally stable and mature as I hoped I would be, but over the past few years I have learned that emotional stability is one of the rarest traits. And considering the challenge I've gone through over the past year, I think I'm doing ok coping with difficulties, and stability in general.
I'll stop rambling now. It's just that this is the one forum where I can tell everyone how weird it is to have arrived. I'm sure my 40-year-old readers are rolling their eyes. I don't care. Keep rolling. It's my blog and I'll express amazement when I want to! Honestly, listen to me, I could go on for hours about all types of things I expected with this age, from my body (I used to be a serious weight lifter, and I always dreamed about the "prime of life" 25-year-old body) to my intelligence to knowledge to career to love life, and so on.
Hey, us old people are supposed to ramble, right? And be incoherent? Welcome to senility, I say! I guess I really am the grandpa of the army now.

Here's some photos for comparison to what six years does to a man: 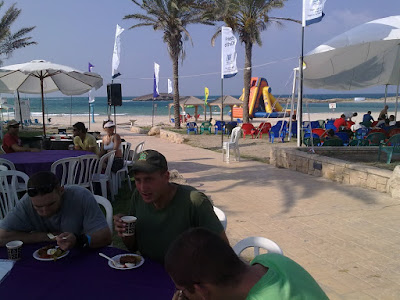 On of the few things America and Israel have in common: When we grow older, we start using the following phrase a lot more often:

"give me coffee or don't talk to me"

Q: Hey, what do we call the time between which often falls between ones Hebrew {real} birthday and ones English birthday?

I'll bet your Hebrew is awesome by now. Golani service is better than any ulpan, at least it used to be.

Yom huledet sameach! I hope you enjoy the day as best you can whilst you are on duty. Enjoy the coffee! ;-) Tishmor al atzmecha, Rafi

;)
Kidding on the eye rolling, you're doing awesome, sheesh man, better than I was.

I have it on good authority from most older people I know that you ALWAYS feel like you're supposed to still be 20, so get used to that disconnect I think.

BTW, do you know any guys in JM who need another roommate?

I'm getting desperate and have to move on Sunday, and still haven't found anything.

Happy 25th birthday, Danny! Keep your spirits up and your head down.
UB

Happy birthday Danny!
its great to see you've made it another year. btw not every reader is a "40 year old reader" im young enough to get where your coming from.

ps. do you have an e-mail readers can e-mail you to ask questions...i feel bad asking questions in your comment section all the time.

pps. I think its about time you start putting yourself out on the meat-market. not like your on the clock or anything, just get going.

well grandpapa (in heavy german accent) stop talking about the old days.. the world belongs to the young.. the 18 nah just kidding :D ur still young and its important u feel this way in ur core I feel like I am old >< I need to feel 16 damn it..

you finished college with a degree.. you are serving in the army for over a year and you belive in what you do and passionate about it (altough you are probably shvur zain already) and thats the most important thing my bro :D

A very Happy Birthday to you, Danny!

Happy Birthday! Mazel Tov! I'll be turning 25 myself..in Dec. so it'll be golden..yet i feel like i'm 19! I feel in the same spot too. what and where I'd thought i'd be at this age back then is different than what i imagined..yet i do wonder what plans G-d has. But it's cool. Hope your birthday didn't consist of too much yelling. =]

The biggest surprise about getting really old (more than 40, even) is the discovery that the "kid" feeling of 25 never goes away. The old bod sags and wrinkles, inevitably, but the real you stays the same, only wiser. At 40 I finally felt I'd been around long enough that my opinions were valid, so I voiced them without hesitation. At 64, more of the same, but with the awareness that time is running out. So make the most of being 25, and mazel tov.

first of all, did no one get that sarcastic paragraph in the post? No one called me on it. I guess every reader thinks I'm the most self-absorbed person in the world!

Aunt Jo and UB - thank you guys! I hope we get to catch up soon.

ben-yehuda - sorry, no info here. Did you try nefesh bnefesh? They help everyone.

Anonymous - check my author profile for my email. Just click on my highlighted name here. Why do you say that about "getting out there"?

Canman - being shavuz is a daily fact for everyone. so yeah, you hit the nail on the head. Did you mean to ask when I was most muscular? Well, I think I am probably bigger now. Before the army I was about 220 pounds, essentially all muscle. The army prefers a runners body, though, so I'm like 200 now. Honestly, I lost like 5 kilos THE FIRST WEEK. Think about that. So, I have the potential to be considerably larger at 25. This is my physical prime.

Pang - there wasn't much yelling, and they kept giving me special treatment, so it was fine! And, btw, I did indeed have cake.

Suzanne - although some elements of being a real adult are kinda sad (loved ones entering old age), I think it'll be great to be 60 or so. People listen! Ill love that :)

how are u drinking coffee on the beach while in the army?

It was a yom kef (fun day) for lone soldiers a few months ago. They really hook us up sometimes - Thanks Friends of the IDF (FIDF)!!!!!!!!!!

Happy birthday man. See, you're a very lucky (deserving) guy. You've reached 25 doing exactly what you wanted to do. See I'm 26 and still can't believe it I'm past 25. And I'm all out of control in life. So you're doing pretty good, keep that in mind.

Thanks, Rafael. But trust me, I'm just as mixed up as anyone. I just happened to fall in the lap of a good ideology, one that really takes your time and mind! Listen, I think about post-army life ALL THE TIME. Law school? Corporate job? Public relations? Marketing? Writing? Bumming it? Security-related field? Etc.

I'm just as mixed up.