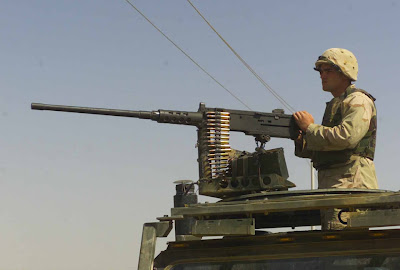 All my life I heard from my great-uncle about his time during World War Two onboard a PT boat. PT boats were smaller, high speed and heavily armed ships meant to quickly attack larger ships. They were cheaper, easier to navigate, and easier to produce than larger ships, and so they were given quite a bit of action in that war. For example, PT-41 was used to rescue MacArthur. JFK became a legend because of his service on a PT boat.

Besides being amazed at stories of their prodigious speed, and his servicing the triple 12-cylinder, nearly 2,000 horsepower engines (the fastest Ferrari has 650hp, and your average car probably has 150hp or even less), my uncle was very fond of mystifying the "twin fifties." The twin fifties were the 50 caliber Browning M2 machine guns. The M2 is one of the world's most widely used American weapons. Developed during WW1, the Browning is a heavy machine gun that has to be mounted on some type of vehicle.

When I say "heavy" machine gun, I do mean heavy. First of all, it weighs an ungodly 130 pounds. Secondly, it can be used as an anti-aircraft weapon. Finally, it fires a .50 caliber round. Here's a comparison picture from another blog, showing the bullet: 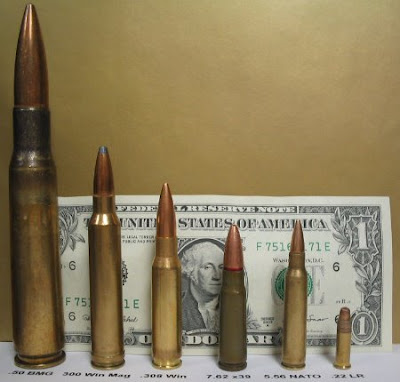 It's on the far left. My Tavor, and the M16, shoots the one
second to the right.

OK, now that you have an idea of just how huge and powerful and scary and "heavy" the Browning Machine Gun is, let me tell you why I'm talking about it anyway. Earlier this month we were at a training base where you learn all about heavy weaponry. One of those heavy weapons was the Browning .50, which is a key tool in any modern army. I'm not giving away any secrets whatsoever when I say I was drooling over the .50s mounted on tops of Hummers and APCs and the like. 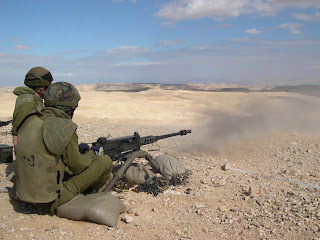 You see, all my life I always thought about the army, in some way or another. My great-uncle the PT sailor, and especially my grandfather, a POW lead B-24 bombardier in WW2, incessantly told me stories about their experiences. My childhood was shaped by the notion that the army is, in some way, what great men do. Grandpa Brothers was a hero to me, a man who owned life and did with it as he wanted, and his war stories are easily the thing I remember best of my childhood. My great-uncle and his stories of all-out combat on the high seas were right up there too.

So many of those stories were centered around heavy firepower, too. The twin fifties. And now all of a sudden I find myself in an army, beyond all expectations, and here I am, lugging around the very same machine gun that was the protagonist of some of my favorite childhood stories! I realize it may seem terrible to glorify a vicious tool of war, but one can't help the fantasies of youth creeping into the reality of adulthood.

So as I struggled to move this behemoth block of steel from one area of the base to another, I was magically transported to the Pacific Ocean, blowing diving kamikazes out of sky, shooting down German Messerschmitts, and strafing Nazi airfields. I guess it felt kind of good to feel like an "army man," as I envisioned those that dealt with tools like these. I think I felt a little bit like my heroes.

But then again, would I have the guts to do what they did? I really don't think so. They were a part of the greatest generation, and their use of such machinery was spurred by a true quest for freedom against tyranny.

But to feel like your heroes, even for a moment...


I will refrain from posting pictures that might exist of the author with said machine gun.
at 1:24 PM

How are you liking the Tavor? It was introduced when I was in the army. Never got to use it myself but I heard there's a lot of criticism.

I wish my son was more like you. Half Israeli, ethnically Jewish, but feels no obligation to serve in either the US or IDF military. Hope he doesn't complain when the Muslims conquer all.

good thing you have brownings, tanks, nukes and air support. those palestinian kalishnikovs and stones can be really terrifying. let's not forget how important it is to protect all those wacked out brooklyn-born settlers in the territories. also makes israel look great in the media. such a mitzvah you're doing. kol hakavod.

Hey! Just stumbled upon your blog today! I'm a 20-year-old olah chadasha from Florida and I actually just drafted at the beginning of this year. It's hilarious to read your blog and also refreshing to know that i'm not the only one who has been wondering why israelis feel the need to complain sooooo much haha. I have a couple of friends who are in golani, drafted last year though. Good luck with everything!

love you bro. be safe!

they actually trust YOU with these guns??? Goodness...

dude. send a brother the pics with the fitty!!!

Yep, the "Efes Chamesh" is really sweet. We had one mounted on top of the main cannon on our tank during the First Lebanon War. meanwhile, the PT boats were not heavily armored at all! They were so fast and manueverable precisely because they were light craft made of plywood! I hope you have a greater appreciation for your great uncle now! Shabbat Shalom Achi. Best of luck with the rest of the maslul.

i love the tavor. most all of the guys in my unit know nothing about guns, and all they talk about is the m4 "flat top." "oh the flat top is so sick!" they just like the way it looks.

in all actuality, i have the "flat top" tavor - a picatin rail for putting on the 4x trijicon acog.

they're dumb and the tavor is awesome. it's a perfect battle rifle.

for example, i own an m16 in america, and even though i keep it very clean, i get jams all the time. it's a jammy gun. my tavor, in 7 months of HARDCORE use, probably thousands of rounds shot, has had ZERO jams.

Well, that's good news about the Tavor. When I was in Golani in 1977 we had the Galil, and considered ourselves superior to those who carried the M16.

So when are they going to make an export version?