In a post from early March, soon after the start of Advanced Training, I talked about my unit losing one of our commanders. You can read it here. In short, he was tough but great, and I miss him very much. He was just about as veteran as they get within the three-year compulsory service, and even had a Lebanon War pin on his chest - he was in training still, but helped in logistics during the war, as did all the non-combat ready infantrymen.
And as Commander Crazy Eyes left, as I called him, he was replaced, as well as another veteran commander that left, with two guys from the November 2007 draft. Now, remember, I am from the November 2008 draft. That means these guys have been in the army for just one year more than me. Basically, they finished their training and then went straight to my group. They did half of kav (border guard duty), and then went to the commander course. Now they're leading us.
Don't get me wrong, these guys know what they are doing. They obviously know the army well, know what they're teaching, know the weapons and battle tactics we learn - all of it. They are good guys, I really do like them. One of them seems very smart, even though he is pretty meatheadish, so that's interesting to see. The other is obviously very in love with his girlfriend, so I like to pick on him when he's secretly texting her all day long. Truthfully, I got two good guys.
But having Crazy Eyes telling me what to do, and bossing me around, was something I could deal with. He was drafted way back in 2006, before I even knew if I wanted to move to Israel, much less do the army. In fact, and don't tell anyone in Golani this, but if you asked me then what I would do in the IDF, I would have said the spokesman unit!

The true mark of a 'veteran' currently in the army is whether or not he was drafted in 2006. Crazy Eyes was, and he really is a veteran. These new guys, on the other hand, are truly kids. How young are they? Let's put it this way: If I wanted to, I could have been in their induction class. In my book, that means you're tzair (young - green). So, when they give me five minutes to do this or that, I can't help but grumble to myself and give them the evil eye. I think, "Hey! Kid! Respect your elders!"
I guess I just trusted Crazy Eyes more. I listened to him as an authority figure. When I looked at him, I saw someone with experience and perspective. When I look at the new guys, I see two people who just happened to go to the army before me. That's a big difference when you realize that they are literally running your life.
These are the moments where you notice your age in the army, and all of a sudden 24 years old is old man age. But, as I said, at least they know what they're doing.
Here's old Crazy Eyes himself nonchalantly dishing out some pushup punishment: 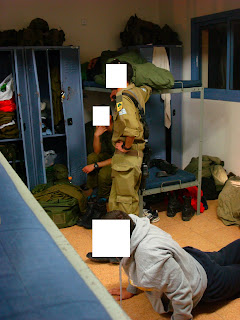 I wish I could show the kid's face. He was smiling. Sometimes
Crazy Eyes would have fun with us, and we knew it. If you zoom
in you can see his Lebanon War pin.
at 6:09 PM

Pazam, kraviut, even rank, these are all dumb military-subculture ways to gauge one's self-worth on an entirely fabricated totem pole.

Hopefully, in time you'll see that there are many different ways to serve the country, and that some of the most amazing feats are accomplished by 18-21 year-olds. A few months here or there are immaterial.

IDF is almost never never land. All kids no grownups.

It is going to be hard being a college grad taking orders from an 18-19 y/o. But remember, you are equipped with life skills that the younger men lack, use them.

The reserve is where the grownups are.

AArghhhhhh I miss the army!! :(