Soldier Gear In A Metal Detector 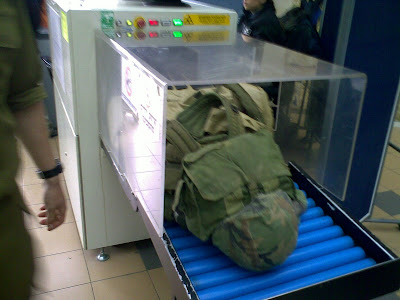 Recently we were sent down to a base in the south to be involved in a large scale training simulation for reserve soldiers, but due to a mistake in calculation, my group was sent back to our base. We got all dressed up in our alefs, dress uniforms, and with combat vest and sleeping bag in hand, took the bus and train up north. How funny it was to walk through train stations and busy city streets with field gear, but yet being dressed in the nice, clean uniform. I think the guys were fairly embarrassed, for some reason I can't divine. They literally begged to travel in our work uniforms. I bet they just wanted to look tough, like we were coming from Gaza or something.

I thought it was hilarious. What was the best part? The beautiful young female security guards at the Be'er Sheva train station made us all put our combat vests into the metal detector. I mean, think about what kind of stuff you would put in a combat vest. Honestly. What was she looking for? Dangerous things? Hmm...

That's a picture I snapped very quickly with my phone. Sorry it's not clearer, but you get the point!
at 12:00 PM

you could be smuggling un-kosher crackers, you never know

Organized crime uses soldiers to smuggle hand grenades and such.

Haha a bunch of Golanchikim in Bigdei Alef with combat gear... what a site.. By the way, I'll be joining the IDF soon (hopefully Givati!) and i was wondering how comfortable those vests were? I heard the IDF was developing a new vest.

Seems to be a lot of stuff. I won't ask what does it include, but I wonder, how much does it weight?

Amiel - good luck. Think long and hard about joining combat!
You'll start out with an old vest, and at the end of advanced training you'll get a new one. Those are very nice.

Rafael - its heavy, but not so bad. The thing is you have it on for so long every day - like all day.

Hi. New Oleh here. I found your blog when I googled "Israeli pizza" for a post I'm doing. Lucky me. Want to spend time reading your blog, but first impressions are great! How do you have the time, I wonder? Also envious of your blog's look. I went with wordpress and it's fine, but I like your buttons, "the author," blog log and more.

thanks, scott. If you want to start reading you should look at october when I joined the army. I blog on the random weekends I have off, but even that's hard because I'm shomer Shabbat. Its exhausting.