The Worst Feeling Ever - Part 2

After a struggle of about 45 minutes the first of us pulled each other up the slippery hill, only to have to run back and help the people about half a kilometer behind. Once we were all up by the road we dropped our gear into a semi-circle and waited. The platoon commander was being yelled at by the bus driver, which I later found out was because he didn’t want us to go onto the bus with our wet rain jackets and pants. Now, mind you, this was the base bus, which has a metal floor, Plexiglas windows, and school bus style plastic benches. It’s not a touring bus, so I’m not sure what his problem was.

I took a look at my watch and saw it was about 8pm. We were finally told to take off all our rain gear, put them into our vests, and bring that onto the bus. I stood in front of the bus and used the headlights, rain illuminated by the beams, to take off and pack my gear. Once I pulled myself up into the bus I saw down, and by now it was pretty cold, and I was soaked. I was sitting on a tiny seat with another guy, drenched jackets on and a dripping vest on my lap. The bus was steaming inside from the cold weather and our warmed bodies all crammed together.

There wasn’t an inch to move, with people standing and sitting in the middle aisle, not an empty space to be found. Gear was piled on us, around us, and under us. I actually felt a little claustrophobic, being soaked, feeling heavy, crammed in, unable to move my legs, feet, or arms, people crushing me from on top, vests next to my head, the heavy air hardly able to breathe. It was really the physically miserable condition I’ve ever felt.

And then the rain started. All of a sudden it came in a sheet, smacking against the roof and plastic windows. PING PING PING, we heard, pings of sharp rain. As terrible as it was inside, at least we weren’t out there, I thought. I looked around and saw everyone huddled in their jackets, fighting the cold, trying to forget where they were. It seemed like we were waiting for hours, and for what we didn’t know. I finally freed my arm and looked at my watch: 1 hour had passed.

To my right out of the hazy window I saw a pair of headlights come up the hill, slicing through the interminable rain. I recognized them the vehicle as the transport Hummer that I had helped unload upon arriving at the camp a couple days before. The sergeant then stood up and told us, many of us sleeping, by the way, to put on our rain jackets, not the pants though, and to get off the bus. I didn’t move, thinking that wasn’t happening, and looked around and saw only a handful of people budge.

Most of us got up as quickly as possible, considering the state of the place, and I woke up about five different guys who were in deep sleeps. They looked so confused, and I felt pretty terrible. I eventually found myself at the exit, and like I was about to dive underwater, I took a deep breath before stepping outside. My foot slipped in the mud, and instantly the rain stung my face. I then realized why it was making a pinging noise against the bus: hail and freezing rain.

If Noah’s flood was acid, as our tradition holds, this was certainly the closest I’ve ever come to understanding such a destructive force. Also braving the conditions were a couple commanders, and they quickly had us go over to a large transport truck. The Hummer backed up to the truck, maybe 15 feet away, and then we were told to start unloading the gear that was crammed in. A light in the Hummer revealed hundreds of sleeping bags stacked on top of heavy metal poles, sharp wooden sticks, and all other various shooting and camping gear.

About 50 guys stood there, unsure what to do. The rain was coming in so hard from the wind that you couldn’t see, sheets of it blinding sideways, and gusts of wind that must have been 50mph. I was one of about 10 people that actually worked, the rest standing huddled together on the side of the road. I was reminded of those penguins that stand huddled against the Antarctic winter, just waiting for better weather. The soldiers were just waiting for us to finish. I looked over at them, through the darkness and blinding rain, and saw indistinguishable shapes. It was that bad. I didn’t blame them for not working.

After unloading the sleeping bags, their slick muddy fabric sliming all over my face and dripping down my neck into my shirt, we had to unload the sleeping pads. I would grab about five at a time, lose four to the wind, and stand with the pad between me and the gusts. By now it must have been hurricane conditions. I couldn’t see anything except a light from the Hummer, and I just endured behind the mattress for as long as I could, waiting for those in front to pass it up into the transport truck and the guys stacking inside.

I was wet to the core, pants just totally useless as they were drenched and clinging to me, shoes and socks squishing with each step. From the relative safety of the mattress, which I hung to for dear life, I peered into the wall of the rain and saw the huddled masses again. They stood totally unwilling to move, statues of shiny camouflaged rain jackets hunched over. They ignored the yelling coming from those of us working. I shivered every second we were out there, my body unable to move, my jaw unable to stop chattering.

I saw them and thought nothing. It seemed so natural to me that they were standing together, grouped on the side facing us, heads down and hoods covering all signs of a face. They were like some dark creatures with no features in a movie, a sign of something bad to come, something gloomy.

I didn’t know why I was working, why I wasn’t standing with them. I understood. For the first time in my life, I actually thought that I was in a position to die from weather conditions. In my mind I said, “If I’m out here for another 15 minutes, I’ll get hypothermia, and if I didn’t have on either this rain jacket or winter jacket underneath, I’d already be dead.” I swear to you that I said that to myself.

Finally we finished unloading the Hummer and loading the transport truck. We were rushed back to our bus, and I got back to my seat and huddled together with the guy next to me. I felt so disgusting, and even nauseous, but I tried my best to fall asleep. I couldn’t, however, and started looking around to see my compatriots. I’d say 90% were sleeping. “Defense mechanism,” I thought.

And then I saw two. They had no jackets on, no warm gear at all for that matter. They were shivering, soaked, and pale. They looked near death. Their faces were expressionless, and they sat hunched over and shaking. I for sure thought they were going to get hypothermia. I just remember thinking, “Where are there jackets?” There was something different about the way they were shaking, and their eyes... eyes that really didn’t look alive, somehow.

I can’t explain how it felt after sitting there, literally begging for the bus to move, when we were again commanded to go get off the bus and unload another full load of the Hummer. I just can’t explain it. I’m not that good of a writer to explain such intense emotions. Either way, we finally finished that second run, which included being forced to take the hoods off our rain jackets, reentered the bus, waited some more, and then it started to move.

We got back to base, terrified they would make us unload it all, but luckily only had to show our vest to the sergeant and check to make sure we had our magazines and the contents of our vests. They gave us 30 minutes to prepare for bed, we all took hot showers, and then got into our beds. 2am.

I can’t tell you more than that. Thank G-d for the base. Now I know why they say “achla bach,” which loosely means that the training base is the best place to be. I just can’t tell you anymore. I can’t tell you how I felt, how good it was to be back and out of that situation. I was just there, unthinking. (The two guys were fine).

Afterwards, the next day, I felt strong. I felt like I did something. Proud. I wouldn’t trade that experience for anything.

“That which does not kill us makes us stronger.” 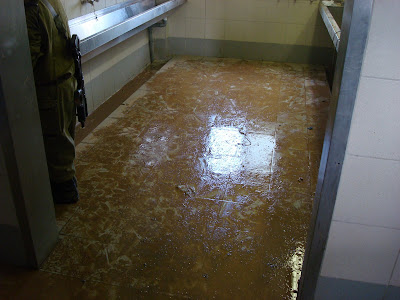 The aftermath in the bathroom
at 2:03 PM

(Also, you were looking for "nauseous").

Thanks for the spell check, jerk.

jk btw, i fixed it

That which does not kill us makes us stronger...

Words to live by!

Wow, it does sound like it was some terrifying deluge!

What does it mean that Noah's flood was acid? Can you explain or point to an explanation. Just curious. Thanks.

Hey achi,
I just wanted to ask you what MOTIVATED you to move away from your life in the U.S, your family and friends, away from a potential sustaining career in the U.S and off to Israel to join the army?

I'm in college now, a freshman, and want to go to the IDF after college badly but these are the things i think about.

By the way, if you make Aliyah you can keep your American citizenship, right? and after the army are you going to stay in Israel?
Your blog is awesome dude,
Keep it up.

Chad - I believe Rashi is the commenter that says it was acid rain. I can't check that right now, but I'm in the 90% sure range.

Oren - check out my first post to see why I moved to Israel: http://www.israelibyday.com/2007/09/945-pm-night-before-departure-my-entire.html

You do keep your American citizenship.

I have no idea what I'm going to do after the army. I'm just trying to get my brown Golani beret at the moment!

Wow, even after a year and a half one of your most vivid posts.

I hope you're doing all right.

Anonymous - thanks for the comment. I just reread it myself for the first time since I wrote it. It was ten times worse than I even described it. The wind, the rain, the cold... I felt like an Alaskan lobster fisherman, minus the warm clothes.