At the beginning of January, a little over a month into basic training, we had our swearing in ceremony. We swear our allegiance to the Israel Defense Forces, and in effect we become official members of the army. Without a declaration of intent, there is no promise of giving our entire self during our service. Anyone want to translate the full pledge from the Hebrew? A proper translation is the last thing I want to concentrate on right now, even though it is a powerful and beautiful pronouncement.

The actual swearing is something I should mention. Company by company, one after another, yells at the top of their voices "אני נשבע", meaning "I swear." I swear to uphold the expectations of my country and army. I swear to give myself without condition to the protection of the State of Israel. I swear to be the best soldier I can be.

Yes, I yelled at the top of my lungs as well. And I meant it.

I wish I had the energy to write up a big thing about how I felt, about how Zionistic I was at the moment, about how I looked at the Israeli flag and felt goosebumps and pride and a surge of courage. I wish I could express myself, but I'm just plain exhausted. So, I'll let the pictures that someone took speak for me. Sorry some of them aren't too clear - what can you do. 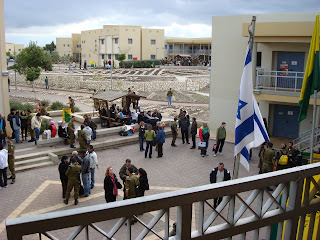 All the visitors around our barracks 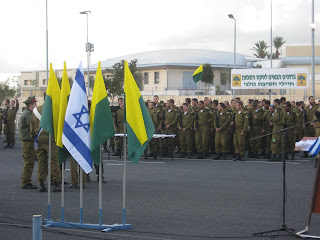 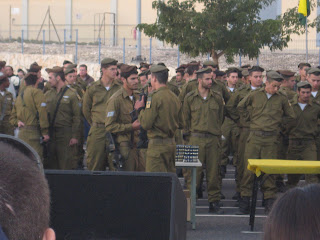 You go around individually according to an order based on the formation
to receive your gun (ceremonially) and a Tanach (Bible). First step, stand and salute your
platoon commander. This picture is of stepping in to receive your gun 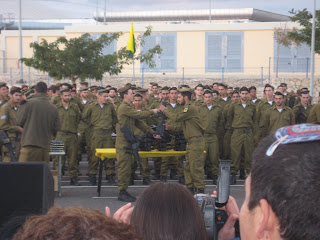 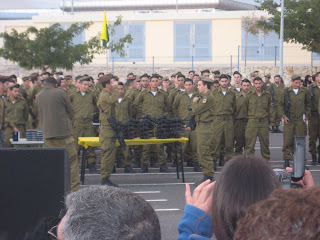 Saluting with your gun The base's rabbi, our induction class commander, and the commander of
one of Golani's battalions (future politician level commander) 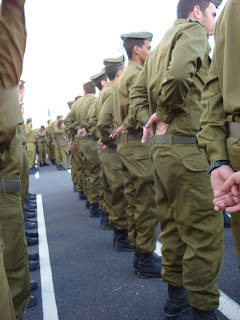 I snuck this one with a camera in my pocket. I wanted more, but I risked
my Shabbat by taking this one. The things I do for my readers! 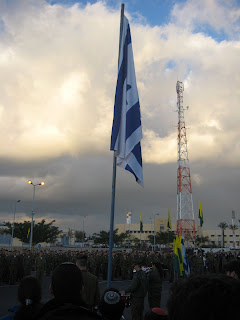 I can say just a word about how weird it was before the ceremony. All the Israelis had their families and friends and girlfriends on base and around the barracks, and there I was, alone. I was just plain alone. Everyone had their moms and brothers snapping pictures and being shown around the areas that we spend our days, wondering what in the world we must do here, being so proud of them and hugging them and kisses and smiles and joking around with the commanders - and I was just there.

But really, I was happy to be there too. I know that if my parents were around, if my big bro was visiting the Golani training base, they'd be the exact same people. They'd also be asking all the immigrants questions, inviting them to our house every 10 seconds. They'd also give them more food than they could ever hope to eat.

If my family was around they'd too be giving me hugs and kisses and all that gushy stuff. My mom also would be looking at her son wondering when he got to be so tall and handsome (couldn't resist). My dad would look at his son and wonder when the hell he changed from a lanky 13 year old to a broad shouldered young man. My bro would look at me and say, "This soldier is my brother."

I knew this, and as alone as I felt, I could still feel the pride of my family from 7,000 miles away. I felt strong as a lone soldier. I felt strength as I talked to everyone's moms and saw what could only be respect in their smiles. I felt a certain distinction as I shook the dads' hands and saw what could only be admiration on their faces. I saw my mother and father in those faces, even though I have no relationship with any of those people. That is what it means when they say "Golani is a family." In truth, the army is a family for everyone, immigrants especially.

To any non-Israeli looking to serve in the army but is fearing the 'alone' factor, don't even worry about it. You're like a hero here.

Mazal Tov! My best friend is also a chayal boded in the army, kfir.

I've been reading your blog for some time now, very well written.

I just found out about this blog and I read every bit of it. Very interesting, I have a lot of respect and interest for the IDF.
I wish you the most of luck and be safe.

Greetings from the Netherlands :)

Mazel Tov Danny! I've been reading now for over a couple months and everything sounds so exciting. You keep a really positive attitude and thats very admirable. I only did Gadna for 6 days and I was complaining after a few hours.

Be safe and have fun!

" I swear and commit to maintain loyalty to the State of Israel, to her laws, and authorities. To take upon myself without conditions and without reservations the responsibilities of the IDF.
To obey all the commands and instructions given by the commanders and to dedicate all my strength and even to sacrifice my life for the defence of the homeland and the freedom of Israel."

Mine was at the Kotel after a 120KM march. When we were given the Tanach and in my case the red beret, the Seargent punched us in the chest. Not sure why they do that.

the guys in that one pic are doing a reverse Bundy. I love that show!

Mazel Tov! And yes, you guys are heros.

Your comments about not having family around really struck a chord - it's a lonely feeling.

I love this blog past belief and I check it everyday. I used to be very close to another chayal boded and can tell you it's no easier from the other end of the experience - there's something very frustrating about not being able to help when you care about someone so far away. However, during my very short stays in Israel, I was able to see that you're exactly right - lone soldiers really are treated like heroes there, so it's not such a bad gig. At least not all the time :)

Mazal Tov. Where now? BTW, are you with very many other hayalim bodedim?

Achi - you know how proud we all are of you. As you said, of course your family are proud - but your adopted family here b'aretz are also!

Is it only family that's allowed to come? If not, why didn't you tell us! I would have been there if I could I assure you!

Thanks for all the comments and compliments and encouragement. I can't even tell you guys how much I appreciate it.

I'll respond to some comments here:

Lindsay: Gadna is so funny b/c we have a group or two around here sometimes. We just laugh at how young they look. Either way, it's a cool program and I hope you got at least a very small taste of the army.

Israeli: Thank you so much for your translation. It's a good one. 120K march? I'm not even sure I could do that over the course of two days!

Anonymous: We do the reverse Bundy all day every day!

Nooyawka: Unfortunately, they got it right the first time. No extra Thursday off and no extra schnitzel!

Neil: I'll get back to you on that. I have to find out the doar.

Ben-Yehuda: Yeah there are tons of chayalim bodedim around. In my company there were tons before the sayeret gibush, but even after there are plenty. There's a German, a Canadian, an American, a couple Frenchmen, Russians and a Brazilian...some others I forget - Dutch (awesome guy). Etc.

Paul: To be honest, I just wanted to get out of there and get back to Jtown and see you guys!

ya nu whats ur address there? you want packages or not? :)

This is an amazing piece. It really took me back to my days as hayelet bodeda. I actually got teary. I was on the phone to my family whenever I could, by Govina - collect. Whith the phone bill my parents had they could have just come visit me.

You know you can invite your friends to these things, it's especially nice with the ones where you go home afterwards.