This week I am going to post multiple pictures in five separate photoblogging articles. Because of my circumstances I tend to just have pictures from the modern areas of Jerusalem, the predominantly Jewish and Westernish sites throughout the city. I put up pictures of silly Hebrew signs and unique occurrences on the street. As representative of my day to day experiences these can be, they fail to relay one part of my life that is just as important to me.
I like to tour through Arab areas. I go into East Jerusalem sometimes. I often find myself in Arab neighborhoods. I have been through the West Bank, deep into what most would consider dangerous territory. And, of course, I love to walk the Arab/Muslim streets of the Old City here in Jerusalem. Trust me, I'm always very safe and objective in these trips.
So, as I went on a little stroll with two friends of mine through the Muslim and Christian (still Arab, though) Quarters of the Old City last week, I snapped all the interesting shots I could think of. You should keep up with the site this week as I have many pictures to post, and this is only part one of what caught my eye:
Click on the pictures to see larger size! 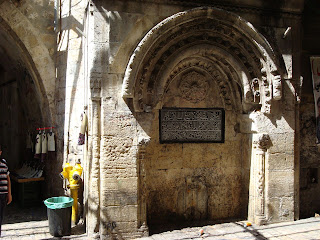 What appears to me to be an old running water alcove that the residents
of the Muslim Quarter must have used before that luxury was available
throughout homes. My archaeological estimation is that this dates to
the Ottoman timeline, and it may even stretch back all the way to the
16th century - I think that because of the inscription, which looks
enormously like the actual surviving inscriptions for Suleiman the
Magnificent at the city's gates (1530s). 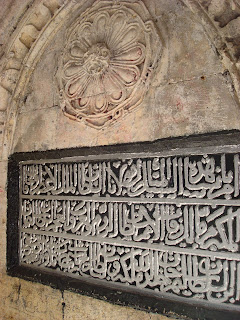 Here is that inscription up close. If someone could translate it for me,
I would be extremely grateful. There are many of these inscriptions
throughout the Old City. They are written in a fancy, cursive Arabic.
I think they're among the most beautiful treasures in all of Jerusalem. 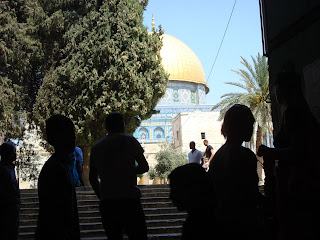 This is as close as I could get to the Temple Mount. I am standing on
some steps leading to a gate onto the Temple Mount. The deal is that
the Mount is often closed to anyone but Arabs, and many religious
Jews won't even enter the area because we aren't 100% sure where
the Holy of Holies stood - a prohibited room in the Holy Temples,
entrance punishable by death. These steps were flooded with tourists
aching to get on the Mount. You can't even really tell from the picture
just how close I was, though. The Dome of the Rock loomed overhead. 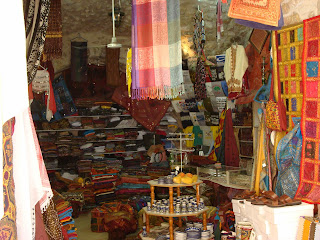 A store specializing in various fabrics, which apparently are a big
deal in the tourism industry for the Old City Arabs. You can get all
types of scarves, afghans, throws, et cetera - all in innumerable
different colors. 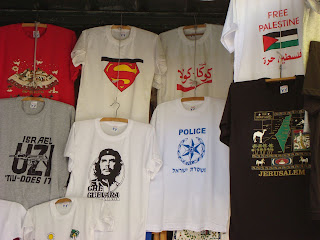 I've been dying to get this picture. The irony! If you've wondered
if the Arabs of the Old City are generally hostile and easily angered,
just take a look at this. What's more important, freeing "oppressed
Palestine," or selling the ubiquitous tourist T-shirts promoting Israel's
military dominance for a profit? The proximity of those two
shirts is just classic.

Uh, Julia, not sure you actually read the introduction or description.... this is in the Muslim Quarter of the Old City. The owner may or may not even be an Israeli citizen, probably isn't in fact, and anyway the profits go to the owner.... an Arab.

I think julia was perturbed by the fact you put "oppressed Palestine" in quotes.
It's too bad she jumped on you like that, because she may have had a point had she stuck to the topic.

You don't have to be Muslim to go up to the Temple Mount. You enter on the Kotel side, up the ramp. There are signs to direct you for certain hours, days, etc. It's an amazing place. Bring your camera!

Namaste - Good point, you are correct. At this time, however, I believe the Temple Mount was closed? I remember it being closed sometime around then. But you are correct, from the Kotel you can enter.

You know, I lived in Israel for 4 years and I never went up there. I regret that, but will do it someday!