America May Be Too Comfortable

For those of you who didn’t know, I was just in America for a few weeks. I think it’s something of a ritual for western immigrants to take a trip back to their home country just shy of their one-year anniversary in Israel. Being without my family over here isn’t the easiest thing, so it was nice to get the crew back together again, no matter how cliché my trip was. I went back, however, with a wary spirit.

In 2006, I spent about eight months in Israel studying in Tel Aviv University and a yeshiva in Jerusalem. By the end of that time, the final month and a half or so, I was more than ready to return to Virginia and all the luxuries of living under the roof of even a relatively poor doctor. I was just about sick and tired of tiled floors and stone walls - bring on the carpet and drywall! 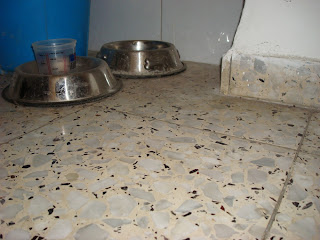 Typical Israeli tiled floor.  We keep the dog bowls around as an excuse for the smell

Before I moved here last year I was a little worried that I would have that same yearning for the luxuries I grew up with. Don’t get the wrong idea: Israel is a first-world country with all the luxuries of America. The problem isn’t what’s available in Israel. The problem is what I can afford, of course. So, knowing that I would be stuck with grimy tile and peeling plaster, and that it affected me in the past, I wasn’t confident that I could put those trivialities aside and embrace the true reasons I moved to this land.

Hesitatingly entering my eighth month, the point of my longest stretch in Israel, I was relieved to find that my fears were unfounded. I found that I didn’t care that my apartment smells like a wet dog (thanks to a wet dog that lived in our apartment for about two months more than half a year ago). I didn’t care that I literally cannot turn around in my shower without holding on to the wall to keep me from tripping and falling. I just don’t care that I sleep on a leftover mattress that looks like it was left out in a monsoon twenty years ago.

Despite not being bothered by my lack of creature comforts, I’m not too proud to admit that I have felt some degree of jealousy over the lives of certain friends of mine in America. Coming out of university I had a couple options. One, get a real job. Two, do something out of the ordinary. The out of the ordinary category included teaching English in China, getting a lifeguarding job in the Caribbean, traveling out West, and of course moving to Israel.

Though I am very happy with my post-college choice, sometimes when I hear what kind of salary and benefits kids in my own major and milieu are receiving, well…I have my doubts. With that shadow of a doubt in the back of my head, I went to America expecting to be overwhelmed with the lavishness of the world’s richest country. A year abroad as a poor man should do that. Just compare my bathroom at my parent’s house versus the bathroom at my apartment. 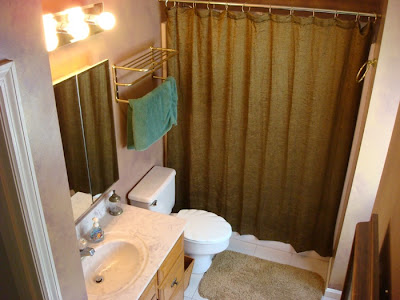 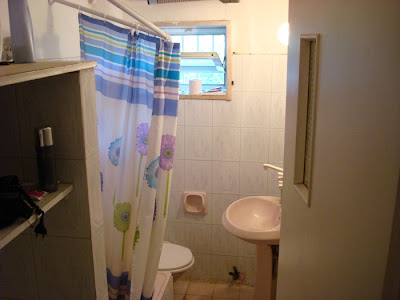 The bathroom I can afford in Israel... yes, it's pink
Instead, I had an unexpected realization while in Virginia's lap of luxury. Believe it or not, I was getting out of my mom’s car and walking into Wal-Mart when I was overcome with a feeling of uneasiness. Here I was, driving like it was no big deal, being surrounded by people greeting me and randomly talking to me, going into a store to purchase multiple items – all of which are activities that worry the hell out of me in Israel. In America I am so used to and comfortable with life that nothing really gets to me. Nothing, as I see it, has challenged me on a daily basis.

But in Israel, oh man, in Israel everything is a challenge! All my friends are getting their licenses - not me! Driving in Hebrew? I can barely walk in Hebrew. Random people starting conversations with me? Yeah, I can do it, but it isn’t mindless chatter for me over here. And buying necessities? Even that makes my palms sweat.

So, my realization was not that I wanted to do something ‘out of the ordinary’ with my life. Rather, I wanted a challenge that was out of the ordinary. Going to law school or getting a corporate job would absolutely be a real challenge – but in no way are those pursuits extraordinary. Not that there is anything wrong with either of those paths, in fact I will probably be on one of those eventually, but I just wanted something more exciting for now.

I felt that America’s comforts were just too comfortable for an ideological and inspired 23-year-old. I didn’t like how easy it was for me to just live my days. I didn’t like how cheap electronics were, how carefree we used water and electricity, how big our house was, how constantly climate controlled my bedroom was. Again, there’s nothing wrong with living the high life; I just want to live the most basic, most challenging life I can right now.

I can’t tell you the satisfaction I feel here when I struggle to pay rent, barely scrape enough together for a decent meal, and finally find a little extra to buy a beer at a pub with my friends. The satisfaction and pleasure of struggling to do all those things, but knowing at the end of the month that you’re living in your own apartment with your own stuff and your own food, all without any help from anyone else, it’s overwhelming. In America I have too many resources to fall back on, too many jobs are open to me there that aren’t open to me here (mainly because of my level of Hebrew), and too many family members looking out for me.

Here, I am all alone – and that is the greatest struggle an ideological youth can hope for. If I succeed here, I can succeed anywhere, in any pursuit.  This is my challenge.  This is my struggle.  This is my life, and I only have one chance to feel extraordinary.
However, I wouldn’t mind having carpet, which unfortunately just about nobody has in this country. That and gallon jugs of milk… that’s another post.

You're doing fine if you have enough to have a beer!
Me, I would have taken the lifeguarding job in the Caribbean...lot's of sun, drinks and womem. But don't regret it, your choice was a good one too.

But I don't regret my choice one bit.

This should be on Nefesh B'Nefesh's homepage or something.

Hey thanks, Sabra! Maybe there is somewhere I can send it to.

your thoughts are obviously written straight from the heart. you are correct when you say that if you can make it through this obstacle course, you will DEFINITELY be able to deal with all of life's unforseen challenges.

I just want to say:

damn - you make me feel guilty for my corporate, almost-right-out-of-college job!