Fatah's Mahmoud Abbas is a Coward 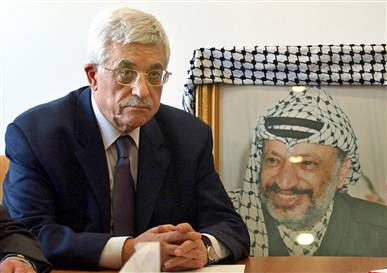 Picture this, if you will: In the still of the night, a Lebanese terrorist unit sneaks into northern Israel. One of these groups enters the home of an Israeli family. The leader of the group captures the father and his four-year-old daughter, at gunpoint, and takes them outside to precipitate a shoot-out. The mother hides in a closet with their toddler - the toddler is accidentally suffocated in order to keep her screams from revealing their hiding spot. Outside, the terrorist shoots his hostage in his back, in front of his crying daughter, and then dashes her head on rocks and finally with the butt of his gun.

This is the definition of a terrorist, a cruel attacker of civilians. This is Samir Kuntar, a Lebanese 'hero,' a righteous warrior of the holiest degree. Despite my current indignation with Israel's neighbors, I don't want to point out his rock-star status across the militant Muslim world. I don't want to discuss the Hizbullah promotion of his cause, their attempts to free him over the years. I don't even want to vent my frustration that Hamas, a group that we supposedly entered a peace-agreement with just recently, holds up Samir Kuntar as an example of a true warrior for the Palestinian people. I could make this post about these groups; groups that the world constantly berates Israel for not wanting to hold discussions with. How could anyone wonder why after seeing how actively they praise a brutal murderer like Samir Kuntar?

No, no, I want to reveal what no one wants to discuss. I want to make my disappointment with a certain 'partner in peace' so clear that no reader of this blog will ever make the mistake of saying that Israel has even one true peace-loving neighbor. Jordan and Egypt aside, states which do have official treaties with Israel, we seem to stand alone in yearning for serenity. You should know that the "Israeli-Palestinian Peace Process" is no process for peace, but rather an exercise in Palestinian backstabbing and deceit. Don't be offended - I'll prove it.

Everyone knows that Hamas is a terrorist organization, and that any agreement with those persecutors of the innocent Gazans is a sham. Will there ever be peace with Hamas? Probably not. But, as opposed to Hamas, most people feel comfortable calling Fatah, the government of the Palestinian Authority in the West Bank, a 'moderate' group. Most of us feel comfortable claiming that if peace will exist between Israel and the Palestinians, it will only be with Fatah as the head of the people. I myself would have made this claim without hesitation until I found out the official stance of Fatah during this Samir Kuntar business.

Mahmoud Abbas is the political leader of Fatah and president of the Palestinian Authority. He is the successor of Yasser Arafat's short-sighted government, and many were inspired with hope that this new leader would be courageous enough to make a compromise, courageous enough to make peace. Many feel that Abbas is a moderate leader, a man who unlike Arafat realizes that Israel is here to stay, and consequently to end the violence he might just sit down in earnest to end the senseless violence. The world has called on Israel to embrace Mahmoud Abbas and his Fatah government. The world sees Abbas and Fatah as sensible, moderate, considerate partners in peace with Israel.

Wrong. Wrong. Wrong. Samir Kuntar brutally murdered a father and his four-year-old daughter, as well as another innocent man who stood in his way, and yet the Arab world calls them "liberated heroes." One would have expected Abbas to have rejected the hero's welcome that Kuntar received in Lebanon today. I would have expected a true partner in peace to have rejected senseless violence against an innocent family, senseless bestial brutality against a young child. And yet, with the sudden decision to release Samir Kuntar to Lebanon, Mahmoud Abbas "praised the prisoner swap and congratulated the Kuntar family."

Congratulated the Kuntar family? As in congratulated them in having their murderous son back, a human who could actually slay a four-year-old girl and call himself a liberator? By congratulating the Kuntar family, Abbas has essentially praised Samir Kuntar's treachery, his violence against Israel. What kind of moderate leader, what kind of partner for peace praises renegade slaughtering of civilizians? Abbas has showed his cowardice in not standing up to the blood-thirsty mentality that groups such as Hamas have perpetuated within the Palestinian people, and consequently he has revealed his true weakness.

For Mahmoud Abbas and Fatah to bring true peace to the West Bank, they must first convince the people that peace with Israel is good for everyone, and secondly that that peace necessitates compromise. Unfortunately, Abbas has taken the short-term solution of appealing to the mob mentality, the desire to spill Zionist blood. Where Yasser Arafat truly wanted blood, Mahmoud Abbas has been forced to play along with this aim. Abbas has failed his duty to bring an end to the Palestinian plight. He has failed to stand-up to the idolization of violence in Palestinian culture. By praising Samir Kuntar's terrorism, Abbas has fully embraced his own impotence. Abbas cannot rebel against the will of the people, even though this will is viciously detrimental to the cause of Palestinian freedom.

And a final word on the faithful mediator, the only real partner in peace, the only group that without exception strives for an impartial and fair road to tranquility in the world. I speak, of course, of the United Nations. I speak, of course, sarcastically. I won't go into a discussion on the U.N.'s blatant anti-Israel history. For that, go ahead and check out the fascinating UN Watch discussion on this topic. So, what was the UN's role in the Hizbullah-Israel prisoner swap? One would think that they would observe the trade, guarantee peace for both sides, and step aside for each sovereign country to handle their citizens as they wish.

One would think. Samir Kuntar, after entering Lebanon, was flown by UN Interim Forces to Beirut to a red carpet where he was greeted by the heads of state. The UN placed him on the red carpet in a ceremony to embrace this national hero, this murderer of children. Should I say more? Honestly, do I need to even say one word more?

Let me review: Hamas and Hizbullah are terrorists. Abbas is a pawn of Yasser Arafat's blood-lust. The UN has failed its role in promoting peace.

I want to leave this conversation with Olmert's powerful words:

"Woe to the nation that celebrates in these hours the release of a bestial person who smashed the head of a 4-year-old child."
at 9:47 PM

well written and 100% accurate. only one thing was amiss. had you really ever thought otherwise? forget about US / UN / Big 4 's faith in fatah, did you ever trust abbas for a second?

the man has a doctorate in denying the holocaust and represents our "partner"? i, for one, am not at all surprised.

You are 100% correct hubscubs. I guess I just honestly thought that maybe Abbas realized by now that his only avenue to staying in power was to actually bring peace to the West Bank - to open up checkpoints and crossings by ending the violence. That is, in my opinion, his last chance to stay in power before Hamas totally takes over (they are certainly poised to do so in the West Bank, creating a total control over the Palestinian people).

(i m not a supporter of hizbollah)i agree, this is wrong to kill innocent people,like civilian, kids. But to be honest, how many civilian Palestinians are killed by Israel? how many Palestinians thrown out of their homes? how much land of Palestinians and others is captured by Israel?
iftikhar khan

But Hizbullah's entire modus operandi is to hide among children in order to limit Israel's ability to attack the militant/terrorist operations. Blame Hizbullah, not Israel.

Israel doesn't capture Palestinian land. Israel either was granted or purchased the land on which she sits.

Very well written essay.
Why can't the world wake up and really understand what is happening in the Middle East?
Don't give up on making your thoughts heard, no matter how frustrating it might seem at times.

And how many families Israel has killed and massacred over the decades. You are quoting one single example, of which, the truth is untraced and unconfirmed.

We have seen Israeli atrocities for over more than 60 years now. These so-called "terrorists" born in response to the Israeli occupation of the Palestinian lands and the killing and brutal massacres which Israel has committed from the day it was supposedly "found" on a disputed occupied land.

I know you don't have the morality to accept facts as facts.

Think about it. If someone breaks into your home and threatens to occupy it and push you out of it calling it his/her own home, how would have you reacted in that situation?

That is exactly the response you get because you the "Israelis" are the Occupiers in this example.

I can't even listen to your argument because you're doubting that Kuntar did what he did. His unit did the killing, he is proud of it, Lebanon is proud of it. There's no doubt to that. They readily admit it and propagate the story as hero-worship. Look at the celebration he received when he returned home, like he won the World Series with a 7th game home run.

Here's the bottom line: When an Israeli goes and murders innocent civilians, like Baruch Goldstein, the mass majority of Israelis, and the government, call a spade a spade. We call that individual a terrorist, and condemn the act. "Monster" is the word I have heard most.

Why can't our partner in peace call a spade a spade?