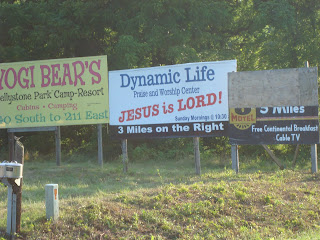 It goes without saying that Jerusalem is a religious city. Being the center of Judaism, being the spiritual navel of the religion and the nation, Jerusalem is steeped in an atmosphere of faith and ritual. A walk down a street in Israel's capital will reveal various posters of religious leaders, signs declaring religious beliefs, and all manner of posters and billboards for Jewish things.

What's humorous is that I left one religious area for another. I left the Bible Belt of America for the Torah Town of Israel (catchy, right?). I left a resoundingly evangelical Christian area for a resoundingly orthodox Jewish area. Sometimes I think it's my destiny to associate with overwhelming religiosity...

I took these pictures on the drive to my house from the airport on Tuesday. I grew up around these billboards, seeing signs like "Jesus is LORD!" and the such. So, it's not that I'm surprised to see them again, it's just an interesting and note-worthy sighting once you live in Israel for a long time. And, I should add that these are just the first two I saw - there are dozens of these things along the road, including a house with a quote from the Gospel of John emblazoned across the side.

I wonder what my European friends think about this? Comments? 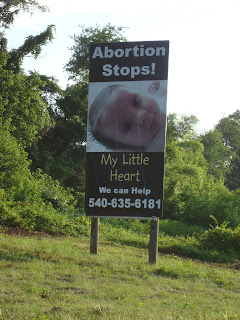 we are so not friends anymore...
You have not even called since you have been in the US! What am I? Chop liver??? :(

With all these signs inundating my mind I don't KNOW what to do!!!