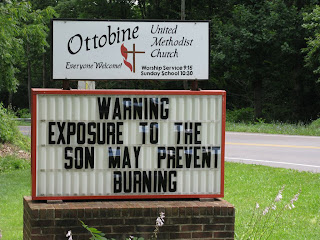 Now, I don't want anyone to get the wrong impression of my intention for posting pictures like this. I don't want you to think that I am judging, or as my father said, "making fun of anyone." Heaven forbid, honestly, that I of all people should judge another's religious beliefs. In my opinion, as long as your religion doesn't prescribe violence or any hindrance to another's religion, it is a faith that I can respect.

So, I post these images with interested anthropological intent. I grew up with signs like this dotting the landscape adjoining my familial home - and this sign is, indeed, just around the corner - and so I have earnestly divorced my own religious orientation from these messages. When I see something like this, a sign that directly speaks out against Jews and Judaism, or any unbeliever of Jesus, I do not feel anger, offense, or even a desire to mock in a natural act of self-defense. Rather, I see such a sign and think something along the lines of, 'What faith they must have! I wonder how they would react to me telling them about my beliefs?'

My other intent in posting this picture - and really, isn't it amazing that there are large areas of the United States where this sign is not even of particular irregularity? - is to really bring home just how large of a leap I have made from moving from the Shenandoah Valley to Jerusalem, Israel. As I have noted before, Jerusalem is packed full of religious billboards, signs, advertisements, and even full posters on the sides of buses. And as I have shown you in just a few pictures, the Shenandoah Valley, and particularly my little area of Rockingham County, is brimming with the same religious billboards, signs, advertisements, and posters.

Same message, different religion: Listen up, or you might get left behind.
at 11:13 PM

are you trying to tell us that WE better listen up or we will get left behind?